FBI went down to Georgia 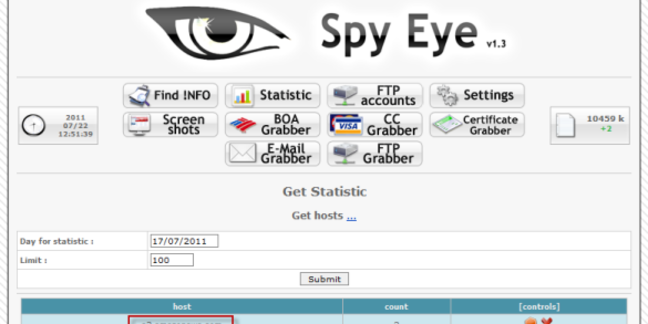 Russian national Aleksandr Andreevich Panin has pleaded guilty to charges of banking and wire fraud for his role in developing the SpyEye Trojan, which used botnets of enslaved computers to harvest financial credentials from internet users around the world.

"The apprehension of Mr. Panin means that one of the world's top developers of malicious software is no longer in a position to create computer programs that can victimize people around the world," said FBI special agent-in-charge Ricky Maxwell.

"Botnets such as SpyEye represent one of the most dangerous types of malicious software on the Internet today, which can steal people's identities and money from their bank accounts without their knowledge."

Panin released SpyEye in 2009 and it soon caught the antivirus industry's attention as a highly advanced piece of malware specifically designed with financial phishing in mind. It is thought to have infected over 1.4 million machines in its two years of operation, netting its shadowy users millions in the process.

According to the charges, Panin sold custom versions of SpyEye on invitation-only black code forums for between $1,000 to $8,500 a pop, and he had at least 150 clients. Just one of these, going by the moniker "Soldier," made a reported $3.2m from financial fraud using the malware. As of 2013, over 10,000 bank accounts are thought to have been compromised by it.

In February 2011, law enforcement seized a SpyEye server in a data center in Georgia and federal investigators found contact details for Panin embedded in the code. They then bought a copy of SpyEye from him and used it to file charges, before arresting him while he was en route through Hartsfield-Jackson Atlanta International Airport.

The investigation has also led to the arrest of four of Panin's "clients and associates" in the UK and Bulgaria.

"Panin was the architect of a pernicious malware known as 'SpyEye' that infected computers worldwide," said US Attorney Sally Yates of the Northern District of Georgia. "He commercialized the wholesale theft of financial and personal information. And now he is being held to account for his actions. Cyber criminals be forewarned: you cannot hide in the shadows of the Internet. We will find you and bring you to justice."

Panin is due to be sentenced by a court in the northern district of Georgia on April 29. ®