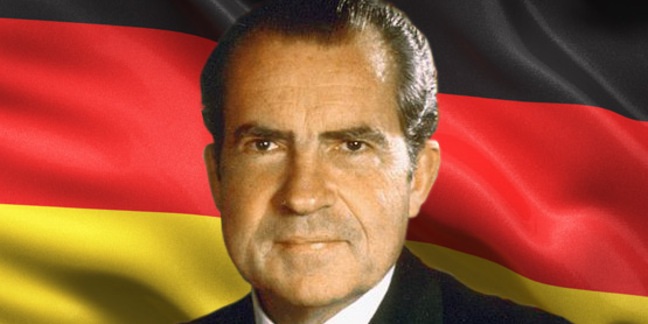 The suffix "-Gate" has been honoured as the German language's "Anglicism of the Year", having recently resurged in Germany more than 40 years after the Watergate scandal spawned the popular, if awkward, English tack-on.

-Gate saw off strong competition from "Whistleblower", "Hashtag", "Fake" and, inevitably, the celebrated "Selfie" to secure the jury votes down at Anglizismus des Jahres.

The press release says the suffix's use was "sluggish" until recently, when it "exploded" with examples such as "Handygate", in reference to the US spook Merkel mobe-tapping outrage.

"Handy", The Local points out, is another Anglicism used for "mobile phone", meaning a double whammy for English in the inexorable slide of German into the Denglisch linguistic mire.

One example is "Fake-Preußentum" ("fake Prussianism"), which might be better rendered in English as "pseudo-Prussianism".

The Anglicism of the Year was established in 2010 by University of Hamburg linguist Anatol Stefanowitsch. Previous laureates include the magnificent "Shitstorm", and borrowed verb "leaken", the latter a product of the WikiLeaks rumpus. ®

What time is it Oxford Dictionaries? How about almost ‘beer o’clock’

We Vultures will all drink to the latest online vocab update

'Hashtag' added to the OED – but # isn't a hash, pound, nor number sign

A hint as to its real name: Know anyone named 'Thorpe'?

And tech-savvy too. *Vulture does sick in mouth*

'Post-truth' beats 'chatbot' to Word of the Year Crown