My other supercomputer is a Lenovo: What IBM System x sale means for HPC

Will this make Lenovo super... or just high performance?

HPC blog Back in May 2013, when IBM was first rumoured to be selling part of its System x division to Lenovo, I wrote a story looking at how this might impact IBM’s position in the HPC market. It’s a good time to revisit that analysis and see what the picture looks like now.

As I noted in the prior story, it’s damned hard to get solid market share and sales figures for HPC systems. Some of this is due to the general fogginess when it comes to measuring overall system sales. But it’s mostly because it’s so difficult to divide “HPC systems” from “non-HPC systems”, since the true definition of HPC should include not only traditional research applications, but also compute-intensive enterprise workloads like predictive analytics and many Big Data related tasks.

So with this in mind, I’ve use the latest Top 500 Supercomputer list as my stalking horse to at least get a look at how the IBM-Lenovo transaction will affect the standings at the top end. It’s not the perfect proxy for the broader HPC market, but it’s better than nothing, right? 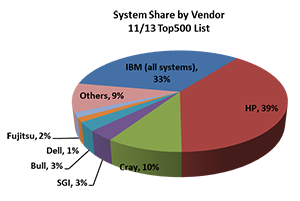 Since the early 2000s, IBM and HP have swapped the lead in the number of systems they’ve placed on the Top500. On the most recent list, HP landed 196 systems on the list vs IBM’s 164 system total. The next closest competitors are Cray with 48 systems and SGI with 17.

In all, there are 35 different vendors (including some companies named “self-made”) with systems on the 2013 Top500 list.

IBM’s 164 systems include both its x86 based systems and those based on its own POWER, PowerXCell and BlueGene technologies. 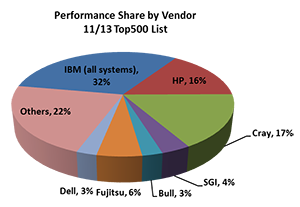 IBM’s share of the HPC market is larger when it comes to overall performance. As can be seen from the handy pie chart at left, IBM systems account for almost a third of the performance on the latest Top500 list – and are more than double the total performance of the next two competitors.

You can also see other differences when looking the list from a performance perspective. For example, Cray’s 10% system share becomes a 17 per cent share of performance. Fujitsu, Dell, and other vendors are also hitting over their weight when comparing systems to performance rankings. 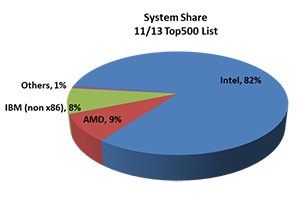 I’m not going to keep you in suspense: Intel is doing pretty well when it comes to supercomputers. 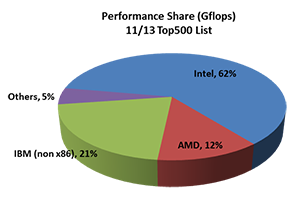 Systems using IBM’s own chips plus a scattering of systems using SPARC and other technologies account for a meager 9 per cent of the 500 biggest HPC boxes in 2013. The story changes quite a bit when it comes to performance. Intel’s share shrinks down to 62 per cent and the total x86 share drops from 91 per cent to 74 per cent.

You can also see that IBM’s non-x86 systems are truly kick-ass boxes. These 37 BlueGene and POWER based systems account for 21 per cent of total Top500 performance. 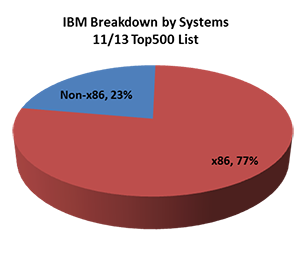 Today, IBM is a big hitter on the Top500 list both in terms of systems and performance. Looking at just IBM’s 164 systems on the list, we see that the large majority of them are, not surprisingly, x86-based boxes. These systems are its iDataPlex, BladeCenter, and typical rackmount clusters, with a smattering of its new Flex configurations thrown in for good measure. 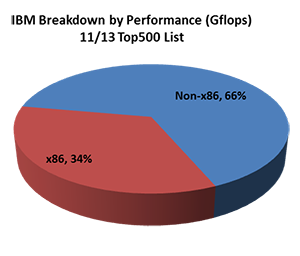 While the x86 stuff makes up the bulk of the systems IBM has on the list, it’s the non-x86 boxes that provide the biggest performance (and probably financial) bang.

The BlueGene- and Power-based systems are obviously much larger and more powerful configurations. We can assume that they’re probably more profitable installations as well, but that will depend on the particular installations and the trials and travails associated with doing the deal.

With the purchase of IBM’s x86 division, Lenovo is also buying a spot on the Top500 list and a sizeable place in the HPC market.

Using the November 2013 list, Lenovo would hold onto second place in terms of systems - 25 per cent of the total (127 boxes). This puts it ahead of everyone except HP. IBM without x86 boxes would place fourth on the system count list, behind HP, Lenovo and Cray.

Lenovo would slide down to fifth when it comes to performance share on the 2013 Top500 list. Its slate of x86 boxes would account for 11 per cent of the total performance on the chart, putting it behind HP, IBM, Cray, and China’s NUDT. However, it would be ahead of SGI, Dell, Fujitsu, and the rest of the pack.

It will be interesting to see how both companies are going to play their reshuffled hands after the transaction. IBM will be riding its mainframe and Power-based system horses - most likely concentrating on their Linux on Power systems in HPC.

Lenovo needs to take advantage of the highly experienced and valuable technical, marketing, and sales folks it will be getting as part of this deal. If it takes advantage of these assets, it can parlay its new (and large) installed base into something much bigger over time. ®