MAC TO THE FUTURE: 30 years of hindsight and smart-arsery

Something for the Weekend, Sir? Christian schoolchildren who pay attention during Religious Education classes will at some point independently wonder why there are more Commandments than Deadly Sins. Keep your Commandments – why are there only seven naughty things to do in one’s life? Even by the age of 12, most youngsters could invent plenty more juicy sins than that.

The past fortnight has seen a great deal of sinning. Well, I call it sinning, but you might be more familiar with it as "Articles about 30 years of the Apple Mac". There’s a lot of it about. The nerdy flock is straying, my brothers.

One of the things The Register does really well, in this humble reader’s opinion, is write a good history piece. Discovering the personalities and behind-the-scenes detail concerning events you lived through is a guilty pleasure. El Reg’s coverage of the Mac at 30 was factual and cautious.

The disappointment with most other history pieces is that, as a reader who lived through some of this history, often you don’t remember things in quite the same way as they are being recounted by some smart-arse who’s just snorted a line of hindsight.

For example, writers over these two weeks seem unable to describe the 1984 launch of the Macintosh as anything less than the most Earth-shaggingly significant in the history of the universe. It’s as if they believed Ridley Scott’s dystopian mini-epic featuring the future second Mrs Stallone wasn’t a primetime TV ad but contemporary documentary footage of actual events in Silicon Valley.

I’d heard a lot about the legend of Steve Jobs’s smartypants presentation to the board during which he removes the Macintosh from a bag, whereupon it speaks directly to the audience: “Hello. I’m Macintosh. It sure is great to get out of that bag.” Earth. Shagged.

Take the trouble to watch the video of this fabled event, albeit repeated in front of the Boston Computer Society, and you might wonder if you are watching another event entirely. Steve comes to the lectern and proceeds to bore everyone shitless for eight minutes talking about business growth and telephones before booting up something looking like my grandma’s TV set that speaks something utterly unintelligible with an accent as thick as that of a freshly arrived Polish plumber moonlighting as a barista at Starbucks.

If Steve hadn’t projected onto the big screen the original word processing document for the Mac’s text-to-speech demonstration, no one would have understood what it had just said. Without reference to the text, history might have recorded that, having been pulled from its bag, the little Mac offered the audience a choice of chocolate or cinnamon sprinkles and began enquiring as to the whereabouts of the stopcock.

More to the point, if the Mac hadn’t caught on – and if you care to look at the figures, the original toaster Mac was pretty unpopular with buyers – historians would be referring to this presentation with sniggers and describing it as cringingly embarrassing. “Remember when he took that bakelite lump out of the bag and it spoke Russian backwards? Ha ha ha!”

Hello, I must be going

If it was so bloody inevitable that John Sculley would cock it all up with his tie-wearing corporate blandness, how come Steve Jobs didn’t see it at the time? Even when Gil Amelio took over, we had no idea that he’d make it worse. Amelio did everything Mac fans and investors wanted, and I mean EVERYTHING: clones, handhelds, the lot.

Sure he resembled a cross between Carlos the Jackal and Bilbo Baggins’s dad but we IT hacks and those clever industry analysts saw him as a possible George Smiley of Silicon Valley, an unassuming, funny looking little dude who’d arrived to clean up the Circus in his own quiet, plodding, thoughtful way.

Amelio practically drove Apple to the wall. One thing I do remember around this time was an atypically depressing editorial meeting at MacUser magazine whose agenda could well have been written down as "WTF are we going to do now?" At no point did anyone pipe up: “I know! I think Apple should hire Steve Jobs and build everything in turquoise translucent plastic!” 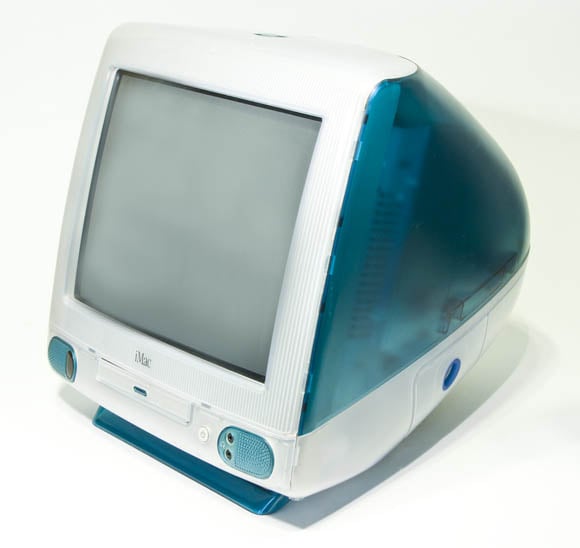 We ALWAYS knew this was going to be a hit, natch

Hindsight reveals that what Apple needed all along was not a sober industry elder who listened to users and worked with investors but a bad-tempered, self-obsessed, whining nutcase who launched and canned expensive vanity projects with alarming abandon. But of course! It’s so obvious!

When we saw the first photos of the original iMac, IT journalists agreed it was the most ghastly computer we’d ever seen. Testing it, we found it to be slow and poorly configured and came with a mouse so badly designed that it made you want to go out and kill someone. A mouse that could drive you to murder? Yes, that’s how absolutely fucking dreadful it was.

But in hindsight, the iMac was beautiful and perfect and just what the industry had been pining for. But of course! It’s so obvious!

Pees in an iPod

As I like to remind children, Apple did not invent the personal MP3 player. In fact, the iPod was so late to the MP3 party that it was picking through leftover sausages and burst balloon-animals. Worse, Apple opted for hard disk technology while every other manufacturer believed solid-state storage was the ideal portable storage.

In hindsight, you realise, those solid-state proponents were fools. Little hard disks in your pocket, that was the answer. But of course! It’s so obvious!

Actually, all Apple did was make an insane and hugely expensive gamble that raw storage capacity would win the day over, oh I dunno, audio quality or reliability. It duly signed up the only supplier of miniature hard disks that would fit the iPod form-factor and locked them into an exclusivity contract, in return guaranteeing that it would purchase its entire stock regardless.

That meant no one else could make hard disk MP3 players, even if they had wanted to. Don'tcha just love the free market?

Smart, eh? Well, only in hindsight. The iPod could well have ended up on the scrapheap along with Apple’s other fantastically expensive failed gambles such as the Mac clones. It was a gamble that won.

And what about that even bigger gamble, the iPhone? Who at the time said outright that Steve Ballmer was off the ball when he doubted that a $500 mobile phone would catch on? (Oh yes, we did - Ed)

Besides, you’d need a pretty big phone to contain the hard disk... doh! Apple is a pioneer in solid-state storage, didn’t you know? Apple’s an innovator, not the kind of no-hoper that puts hard disks in handheld devices.

Few writers at the time were scathing of Steve Ballmer for his criticism, but shit-loads of smart-arses piled in to have a laugh later on, fuelled by hindsight. Of course! It’s so obvious! Oh, and 640KB is enough for anyone, Bill?

No doubt if Apple now decides to dump its ugly plasticky iChav mobiles, I will probably try to claim I always said it would happen.

We are sinners all. ®