The US Army says it has successfully conducted a test in which not just one but an entire convoy of unmanned, autonomous, robotized military lorries successfully drove through "urban areas" on their own without crashing into anything or running over any pedestrians. 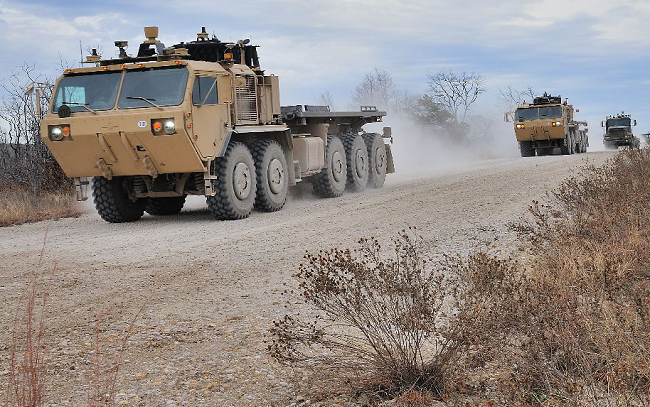 Goddammit, Kowalski, what do you mean it was on there when they set off?

The news comes to us in an announcement by brobdingnagian US defence contractor Lockheed, trumpeting the successful trials of technology which it likes to call the Capabilities Advancement Demonstration (CAD) of the Autonomous Mobility Appliqué System (AMAS) program.

The aim of this is "completely removing the Soldier from the cab" of military trucks making up supply convoys hauling food, water, ammo, fuel etc across warzones to where US troops need them. Not only does this free up more doughboys to actually fight, it avoids exposing them to the risk of being blown up by roadside bombs or mines, and/or peppered by enemy fire in ambushes.

Of course, it's fairly simple to set up a vehicle with a GPS navigation system to follow a route autonomously: but such a vehicle will be likely to crash into others, run over pedestrians, collide with unforeseen objects in the road etc. Thus the AMAS system doesn't only appliqué a GPS guidance unit to the military vehicle it is to command, it also has a LIDAR (basically, laser radar) scanner. This can detect such things as jaywalkers, other cars, inopportune bins and so on, and the software in command can then stop and wait, drive around or do whatever else needs to be done. The kit can be applied to "almost any" vehicle, apparently.

Better still, a convoy of AMAS CAD vehicles can be linked electronically such that they can do all this as a group. We learn from Lockheed:

“The AMAS CAD hardware and software performed exactly as designed, and dealt successfully with all of the real-world obstacles that a real-world convoy would encounter,” bubbles David Simon, robot truck honcho at Lockheed, in a tinned quote supplied with the announcement.

This latest military demo for such technology has probably come a bit late for the Wars On Stuff, now winding down as NATO troops pull out of Afghanistan. Just the other day, a Scottish-led battlegroup was out on the ground providing covering force for a three-mile-long US military convoy evacuating American troops from bases in northern Helmand province - and the Highlander colonel commanding the group commented:

"This operation provided us with an invaluable rehearsal for our own redeployment."

The fact is this sort of kit has been available for years, since the famous DARPA Urban Challenge robo-car contest of 2007. Why, even Google are able to do this sort of thing now.

If the US military wanted to get soldiers out of lorry cabs, it would have done it by now. the fact is, however, nobody wants to be colonel of a load of robot trucks. ®