Windows 8.1 adoption is speeding up, with the operating system now the planet's fourth-most-popular, according to Netmarketshare statistics.

With January 2014 now behind us, the firm has totted up the results of its ongoing observations of just what browsers and operating systems hit the world's web servers. Those explorations found that Windows 8.1 now accounts for 3.95 per cent of the world's traffic, up from December's 3.6 per cent and ahead of Windows Vista's 3.3 per cent.

Want that in a pretty picture? Here you go. 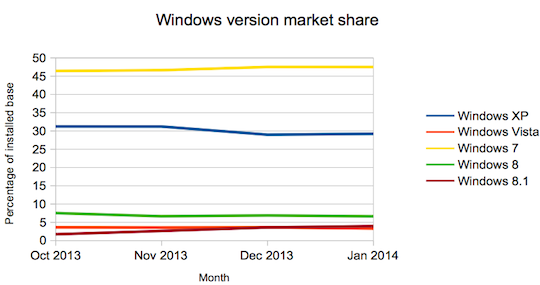 Perhaps the most interesting thing about this data is that Windows XP use is not declining as rapidly as seems sensible, inasmuch as it is now just over two months from the end of its supported life.

Raising rather more smiles down Redmond way, one imagines, is the fact that all versions of Windows 8 collectively command more than ten per cent of the market. That's not a huge share, but it may at least spare some blushes. ®