The revival of survival – the gaming genre that refuses to die

Game Theory In these times of austerity it seems ironic that my free time is being taken up with trying to survive death by hunger and cold. Next I'll be nicked for dumpster diving behind Iceland. I am, of course, in the grips of day 48 of Don't Starve, a perfect gem in the rash of survival games popping up on Steam. 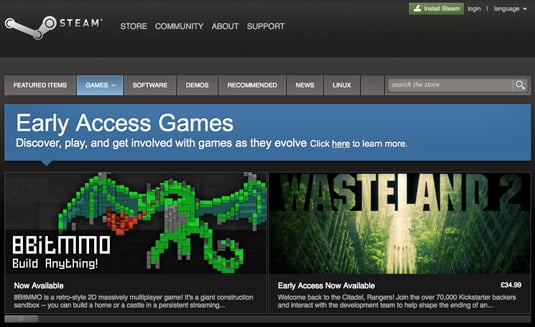 Early Access on Steam has extreme price variations: free to play on the left, £35 on the right

While Don’t Starve is a full-fat release, before Christmas my Steam logon page was abuzz with alpha version multiplayer survival games. These are upcoming and definitely under construction titles.

So if your idea of a survival is to not only get through the game but to endure the bugs, then alpha versions of Rust, DayZ and 7 Days to Die are all available to play. Hey presto! It looks like we have a new generation of FPS games on the way.

These so called Early Acess games aren’t giveaways though, you have to pay to play, but you are, in effect, supporting each game’s development. By the look of them they are all spawned from the wonder that is Minecraft. My health and hunger monitors are just blocks at the bottom of the screen and the whole world and everything in it looks like an early Dire Straits video (but with added zombies and radiation zones). Welcome to the world of pre-release games. 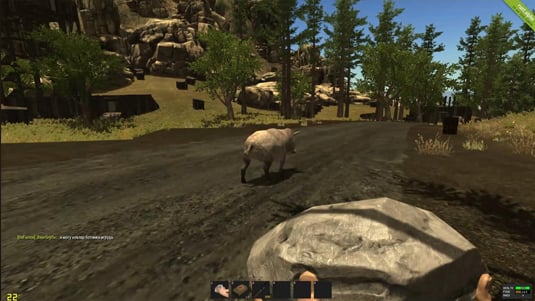 Rock and bone all come together in Rust

I soon remembered to hold back any judgment as alpha games are just the very beginnings of a idea starting to take shape. Having handed over £15 for Rust I initially made the noobish mistake of joining a PVP server. I spent my first five forays into the game being instantly killed by a ghostly discombobulated asshole bashing me over the head with a rock, or some Russian shooting me just for shits and giggles (so much for community).

At least in Don't Starve it's the environment and my own lack of initiative that kills me.

Switching to a PVE server in Rust at least allows you all the time in the world to chase pigs with a rock – the most fun I had in this game in 20+ hours – to harvest chicken. Yes, that's right, this being an alpha, whatever you kill, you collect chicken. Just don’t eat it raw.

It actually poisoned me and I went around projectile vomiting while, you guessed it, chasing a pig with a rock. Contrast that with the much more genteel experience of Don't Starve where, when poisoned, you have the feverish dreams of an upper class opium addict where you are stalked by giant fleas in a wobbly landscape.

Although El Reg has already had a peek at Don’t Starve, as it’s currently the most refined example of a survival genre game, I should say a bit more about it as comparisons are inevitable. I bought Don't Starve last summer, mainly because I was attracted to the Tim Burtonesque Victorian woodcut graphics and its easy-to-play intuitive point-and-click interface. 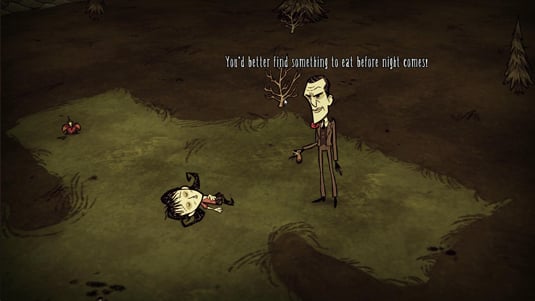 Stating the obvious in Don't Starve

Once you inevitably die, you lose everything but gain the ability to choose different characters from a selection of misfits and miscreants such as fire starters and freaks – even a robot. Dropped into a extremely stylised 2D world of jackalopes, top hats and wormholes I should have known things were about to get weird. Remember kids, don't eat the mushrooms.

If night comes and you haven't collected enough wood to build a fire, you're dead; darkness will kill you before you get the chance to starve. Once you survive the darkness by huddling close to your fire, it's time to get your own back on those amphibians and fricassée some frogs' legs.

I craft a pick axe – the generic tool of all survival games – so I can mine gold to construct scientific machines which allow me to craft more complex items and start my own little settlement. Be warned: winter is coming. If I don't have some fashionable jackalope ear muffs and a heat stone I'll end up like Jon Snow on the other side of the wall.

Incidentally, Don’t Starve is just about to get a major boost with the new DLC Reign of the Giants, which appeals to my major soft spot for angry pandas. 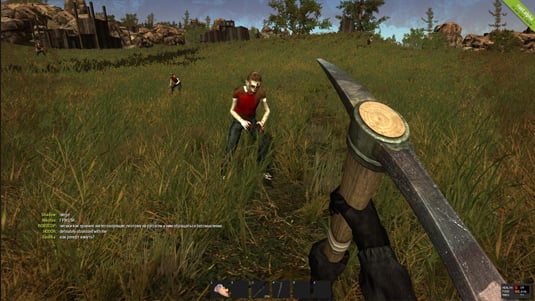 The pick axe: a tool of choice in survival gaming sees plenty of action in Rust

Similar survival approaches are played out in Rust. Here, the multiplayer landscape is already littered with the basic shelters of those with weeks to spend grinding for materials and days to spend crafting them into the rudimentary wooden shelters not unlike digital ramshackle Towers of Babel.

Common chat is full of "I can't find any rocks" followed by "Then you haven't been looking long enough/working hard enough”. I went through what felt like a week in-game (actually about two hours) just wandering to try and find the one piece of rock I needed to create, guess what? A pick axe. It's this common theme of collecting and crafting in the survival games I've played that seems tedious but then becomes addictive to the level of Candy Crush.

All the games I played have the generic inventories that display your loot but what I especially liked in Don't Starve was that my mobile carryall is in the form of a cute and faithful creature Otto von Chesterfield Esquire (similar to Rincewind's luggage) who follows me around as pick up my pinecones and carrots. 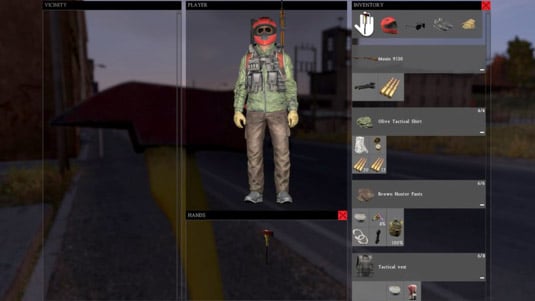 DayZ is surrounded by hype, but no one I know is playing it. The game was an ARMA 2 MOD and is now a standalone alpha but it's still an ARMA2 MOD that the developers want you to pay 20 quid for, instead of getting it for free.

While it's always great to be able to create your own character, its constant thirst just reminded me I'd rather be down the pub having a pint than investing my money or time in this game. Maybe I'm being bitter but it always sucks to have to start paying for something I had been enjoying that was previously offered for free.

7 Days to Die (7DTD) comes over all Left 4 Dead. It’s totally zombie orientated with decaying cheerleaders and plagued nurses as just two examples of the plethora of undead trying to put an end to my survival. This seemed the most fun and polished out of all the alphas I played. Unlike Rust and Day Z there is no endless slog for materials, I can fill my inventory in 40 minutes rather than spend 2 hours looking for a single rock.

This game seems to be just as much about looting as it is about crafting. There are plenty of guns lying about in the towns that are good, as zombies mainly populate them. Out of the three alphas, yes, this is the most expensive at 26 quid but it is the one game I am most excited to see finished. 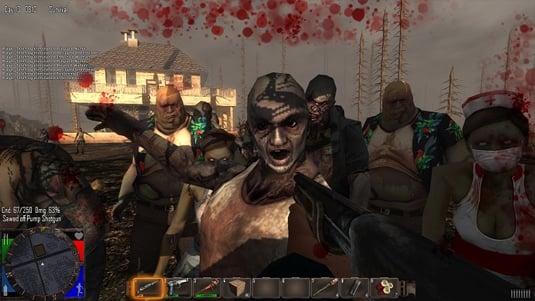 The cost of survival

On this point, I can't and won't moan too much about how basic everything is in these alphas because I'm essentially paying to see these games kickstarted. By buying the alpha, I am an investor in an idea, which is something I rather like the notion of.

In the survival games I played, each time I die, more often than not, everything is lost. All the tut I spent hours bashing, chopping, collecting and crafting are gone and I would give up were it not from the addictive nature of the need to prove to myself that I can survive. I think it's this slow painful progression from hand-to-mouth existence, to laying down some kind of roots that appeals so much and makes these survival crafting games insanely popular. You’re making something from nothing against the odds.

Playing these alphas is certainly engaging but be warned, from build-to-build, these games can change dramatically. Yet at least unlike the antics at Creative Assembly with Rome 2, you are not unknowingly buying an unfinished game. Rome2, patch 9... are we out of beta yet? 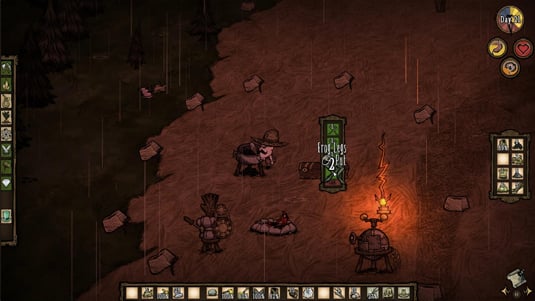 You’ve got to wonder if Steam is one of the good guys here, helping out the kickstarter craze or whether it’s just a giant cashing in on huge prices for barely started games, which in theory you could pay for and then never see finished.

Like all gaming, it really depends on what appeals to you. If you want to see a survival game being developed from idea to release, why not take a chance and invest in one of these alphas? But if you just want to experience a beautifully constructed survival game instead, then buy Don't Starve. ®