EMC's ViPR coils itself ever tighter around firm's storage arrays

Forms one über-array to rule them all, according to Advanced Software div's prez

EMC is submerging its storage arrays under a layer of software, providing control and data access personalities above and beyond its own physical storage arrays, third-party arrays and commodity hardware.

The ViPR data plane and control plane software product is being extended. So too is EMC’s SRM (Storage Resource Management) product with version 3 having more capabilities and evolving, in our view, towards becoming a ViPR companion management app.

A chart depicts how we view the two products. It shows how ViPR data access and control plane layers plus an SRM management layer are being built across EMC’s physical storage arrays, selected third-party arrays and, in the future, commodity or white box arrays. 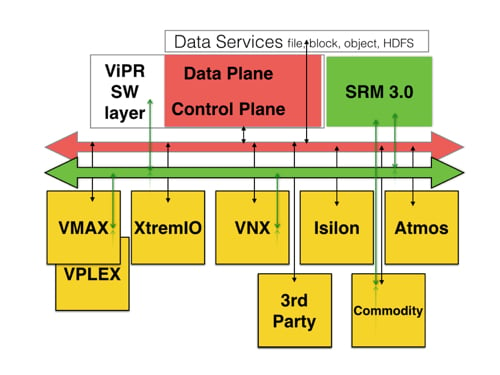 It might be instructive to ask if SRM should be an integral part of ViPR, part of its control plane; a control plane service, if you like.

It isn’t but Vulture Central’s storage desk thinks the arc of its development points that way.

We were briefed by EMC's Amitabh Srivastava, president of the Advanced Software Division, on the current state of ViPR play and SRM 3.0.

ViPR abstracts physical storage into one virtual pool. It carves this up into policy-based virtual storage pools with defined storage capabilities or personalities. Users choose storage services, file, block, object or HDFS accessed, using a catalogue approach. ViPR data services are software-built and layered over ViPR-managed arrays. It means that any underlying array can be used for these data services with, in theory, Atmos capable of being used for block-access storage and VMAX for object storage.

With HDFS data in any ViPR-supported physical arrays can be used by Big Data analysis facilities such as Cloudera and Pivotal without moving the data to specific arrays, Hadoop clusters, just for them.

In effect ViPR becomes an über-array that can provide block, file, object and HDFS storage services to accessing applications. This provision of a software storage layer above the physical arrays provides EMC with a means of transferring value from hardware to software as array hardware becomes increasingly commoditised and, we expect, EMC faces increased price-based competition from cheaper arrays doing what its costlier proprietary arrays do.

The physical arrays have an adapter agent that interfaces them to ViPR. The ViPR APIs are becoming available and third-parties can write such adapters themselves.

EMC has written adapters for its own arrays and for NetApp arrays. It will provide HDS array adapters next with adapters for (certain) IBM arrays after that. Srivastava said: “We’re going to have to support commodity arrays soon.”

The HDS support, for both VSP and HUS arrays we expect, is being beta-tested in an early-access program, as is next-generation object technology. IBM arrays are next and then both HP’s 3PAR and public clouds (Amazon S3?) are on EMC’s ViPR support to-do list.

Srivastava thinks every EMC customer should have a ViPR controller and the company is helping to spread its ViPR message with free downloads for non-commercial use. There were 200 downloads in less than 24 hours after the download facility opened on January 30.

ViPR is EMC’s storage virtualisation product and it has the hot energetic breath of EMC’s senior management filling its sails. The company sees its mid-level and larger customers, in our view, having multiple EMC storage arrays and ViPR is the route to easy operations and provisioning with SRM 3.0 becoming ViPR’s storage resource management ally.

ViPR on its own provides a simple way to manage storage resources, performance and utilisation including metering and chargeback. To obtain deeper insights and visualisation across multi-vendor, traditional and SW-defined storage environments EMC has its SRM v3.0 tool. Srivastava said: “When things start going wrong, working at the virtual level is not good and you need to drill down to the physical arrays.”

SRM 3.0 can work at either the virtual or physical array level with a click on the UI used to select either approach.

It states ViPR integrates with its SRM suite to provide storage, network and host resource capacity utilisation information and analysis for planning and for ensuring service-level agreements (SLAs).

SRM 3.0 is a redesigned product using EMC-produced code added to a Watch4netbase; Watch4net being bought by EMC in May 2012, and the suite GA’d in December last year.

EMC views SRM 3.0 as being important because, in their words, “you have to have visibility of the complete storage infrastructure to do software-defined storage.”

SRM 3.0 is a lightweight product delivered as a V-app. It talks to EMC products plus NetApp and IBM SVC for monitoring and analytics. The product discovers your storage resources and capacity and can plot usage trend lines. It also manages ViPR virtual arrays. Its reporting is said to be use case-based, and claimed to be very flexible and customisable.

SRM 3.0 will develop to look after XtremIO and ScaleIO storage resources. It works with the storage part of VCE’s vBlocks.

Srivastava said SRM 3.0 “understands all of the ViPR providers and uses it to manage the entire storage infrastructure.” It could be a precursor to deploying ViPR, setting the scene so to speak with a discovery of storage assets.

It looks to us as if SRM 3.0 is slated to replace a bunch of different storage management products and become EMC’s primary storage resource management product. Lots of EMC customers are being transitioned to SRM. Check it out here. ®

Need to build a Big Data app but can't be bothered to learn Python or Scala? Good news: .NET for Apache Spark is here

Stay safe and warm in your C# cocoon

AWS has been doing things that are 'just NOT OK since 2015,' says Elastic as firm yanks Apache 2.0 licence

So are ya open source or aren't ya?