NASA scientists are preparing to put Curiosity through its toughest challenge yet, scaling a meter-high sand dune that could leave the Mars rover stranded, immobilized.

The boffins behind Curiosity are looking for the best possible route to the rover's next goal, Mount Sharp, but the two routes open to them at the moment are rock-covered escarpments that could damage the rover's wheels, which have already taken a greater-than-expected pounding.

The rover's six aluminum wheels have already accumulated a few dents, dings and rips from the tough Martian regolith. NASA is experimenting with using four-wheel drive, rather than using all six motors, to try and make life easier on the rover, but the team also wants to move it onto smoother ground.

One solution is to take a route dubbed Dingo Gap – a wind-blown sand dune that stretches between the two escarpments. If Curiosity can make it over that dune, it faces a relatively smooth route ahead. But considering that Curiosity's older cousin Spirit is still stuck in a sand dune on the other side of the planet, it's a tough call to make.

"The decision hasn't been made yet, but it is prudent to go check," said Jim Erickson, Curiosity's project manager at NASA Jet Propulsion Laboratory. "We'll take a peek over the dune into the valley immediately to the west to see whether the terrain looks as good as the analysis of orbital images implies." 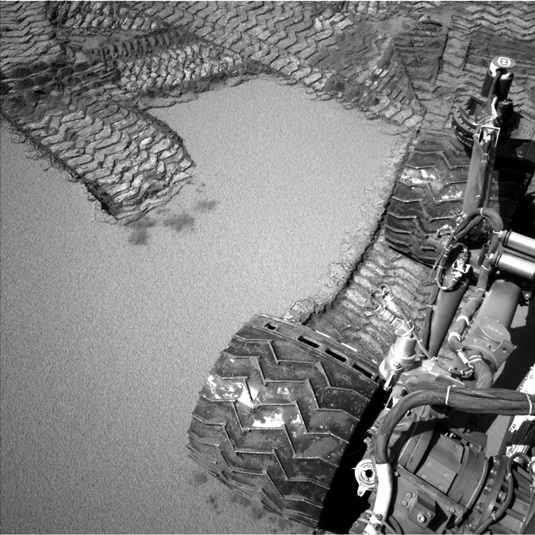 Slow and steady does it

The rover is now sitting on the eastern side of Dingo Gap, and the NASA team is checking to see how firm the sand is under the SUV-sized rover's wheels. The rover drove a little way up the dune before retreating, and the scientists are now trying to see if it's safe to go seriously off-road.

Back here on Earth the temptation, as envisaged by endless Hollywood clichés, would be to rush the dune, shoot up one side, and jump over to the other side, all with a resounding "Yee-haw!" from Vin Diesel and a shot of nitrous oxide to the engine.

NASA's not going to bother with that, but instead intends to take things very slow and steady if it decides to go for the Dingo Gap. You don't take chances with something as precious as Curiosity, particularly when the nearest tow truck is nearly 100 million miles away. ®