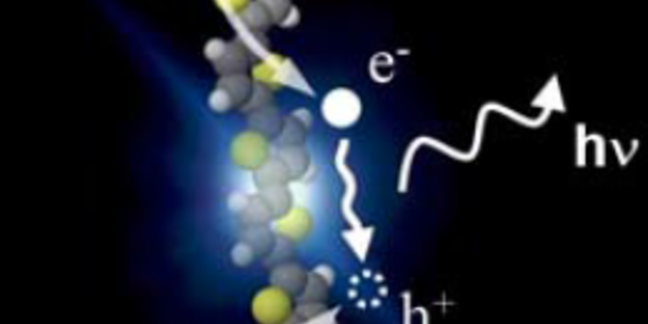 Researchers at IPCMS in Strasbourg, working with a team from the Institut Parisien de Chimie Moléculaire (CNRS/UPMC), have produced an LED that consists of a single molecule.

While it's unlikely ever to serve as a display, the molecular LED is an important step forward in miniaturising components to provide optical communications in molecular-scale computing, the researchers say.

To create the single-molecule LED, the group used a wire made of a substance that's already used in commercial LEDs, namely polythiophene, a compound of hydrogen, carbon and sulphur. One end of the polythiophene wire was attached to a scanning electron microscope, and the other end to a gold surface.

When a current was passed through the nanowire, it acted like all good LEDs and emitted photons. One photon was emitted for every 100,000 electrons injected into the wire, and the light it emitted was in the red range. 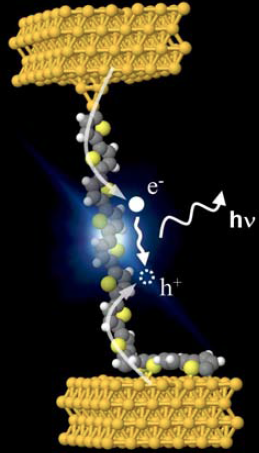 Artist's impression of the nanowire

Light was only emitted with the current flowing from the microscope tip towards the gold surface. No light was emitted when the current was reversed (which demonstrates it's behaving like an LED and not merely getting hot enough to glow).

As a tool for physics research, the researchers say in a canned statement you can download here, “this device gives researchers a new tool to probe phenomena that are produced when an electrical conductor emits light and it does so at a scale where quantum physics takes precedence over classical physics.”

It's also a step towards combining electrical and optical properties in molecular-scale components, the researchers add. ®