Something big bonked the Red Planet between 2010 and 2012

NASA has announced the discovery of a fresh impact crater on Mars, and has released eye-popping pictures of the new hole taken by the Mars Orbiter's High Resolution Imaging Science Experiment (HiRISE).

The orbiter can't provide certainty about when the crater first appeared, as HiRISE was only pressed into service after the less-powerful CTX (context camera) "revealed a change in appearance here between observations in July 2010 and May 2012."

The landscape HiRISE photographed is a bit of a knockout: 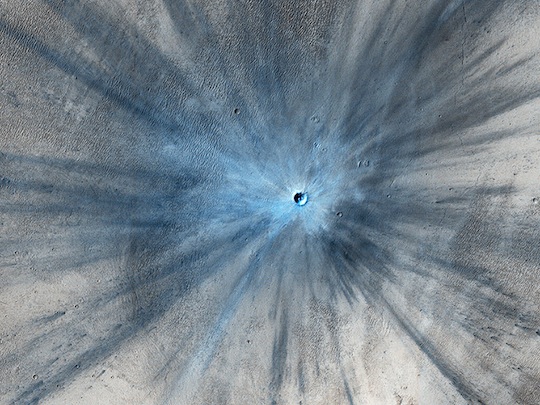 The 30-meter crater on Mars. Image: NASA/JPL/University of Arizona

Some key details about the crater itself:

As NASA notes, the crater is at 3.7 degrees north latitude, 53.4 degrees east longitude on Mars.

Surface impacts are more common on Mars than on Earth, since the red planet's thin atmosphere isn't much use to prevent space rocks reaching the surface. NASA says there are around 200 hits each year that produce craters larger than 3.9 meters in diameter.

Polar storms spin out in predictable directions as seasons change

Mars to get comms upgrade with ExoMars mission

NASA radios due for in-flight test in May

Rocket Lab wants to break free, hopes next mission is more 'A Kind Of Magic' than 'Another One Bites The Dust'

Roundup Plus: Last hurrah for v1 Dragon and Boeing is in trouble