STRIPPED DOWN and EXPOSED: Business kit from the good old days

Something for the Weekend, Sir? A staple of radio phone-ins is to invite listeners to share their stories about funny things they found when moving into a new property.

There are some tales that everyone can share, such as front doors fitted with a letterbox so small that you’d struggle to fit a postcard through without having to fold it in half. There are others that surprise or repulse, such as embalmed cats found behind walls and, in one revolting case, a man who discovered that the previous owner collected dead spiders in paper bags and left them stacked up in the cloakroom under the stairs.

With the exception of those who designed and built their own homes, surely everyone must at one point have looked around at the polystyrene ceiling tiles, dado rails, dusty pelmets and plastic chandeliers and wonder what kind of shit was going through the heads of the mentalists who used to live there.

The previous owners of my house bricked up the door between the tiny kitchen and the dining room for no apparent reason. So instead of serving meals directly from the kitchen to the dining table, I shout, “dinner’s ready!”, pick up the plates... and step into the hallway.

This week I have been making similar discoveries with respect to office machines at my workplace. When did they buy this crazy stuff? Are the people who used it still alive? And, oh lordy, why is this junk still here?

Long-time readers of this column may remember that last summer I acquired responsibility for 2,000 square feet of office space near London’s trendy Tech City area of Shoreditch.

I can assure you that "trendy" was not the word that came to mind the first day I stepped into this dismal den of obliquity. The walls and ceiling had been painted muddy green some time before I was born. All the furniture dated from the 1950s, all of it brown. At some point in the 1970s, cheap carpet had been glued directly onto what must at the time have been unfashionable parquet wooden floor.

After seven months of scrimping, I have finally saved up enough money to get it redecorated. This in turn forced me not just to box up day-to-day stuff but also to investigate what was in the faded archive boxes, on dust-caked shelves and inside the many broken filing cabinets that litter the place.

My Tech City office space turns out to be a hoarder’s shrine to late 20th century clerical work. Dare you join me, dear reader, as we step back in time to visit the kerayzee world of yellowed paper records and obsolete machinery?

The following happy snap shows the part-time office assistant’s desk. Yes, you are looking at an Apple eMac, an electric typewriter and a red ledger book. 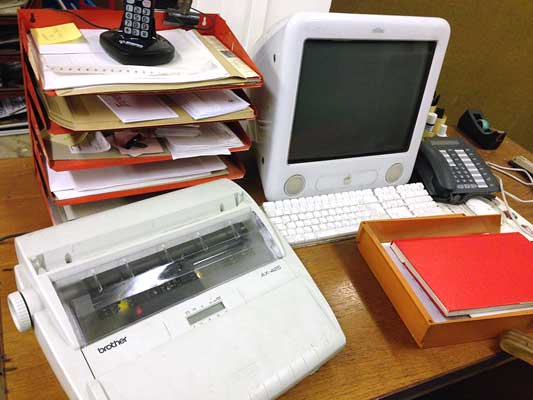 With the exception of the freelance kit I yomp in with every day in my backpack, the photo shows the most up-to-date kit on the whole floor. The typewriter, by the way, is used for addressing envelopes. Don’t knock the eMac either: I laid out a tabloid newspaper on one of those for almost a year. Actually, feel free to knock it: the eMac’s blurry, flickery display all but blinded me, the bastard.

This ought to have rung alarm bells in my thick head. Whatever I was to find elsewhere in the office was likely to pre-date the eMac. As it turned out, some of it pre-dated the pencil.

As I began clearing stuff up for the decorators, I came across several metal cases in "stone white" with chunky hinged carry handles. For any youngsters reading this, "stone white" was a highly fashionable colour for electronic durables in the early days of personal computers. It was the 1980s term for "yellow". 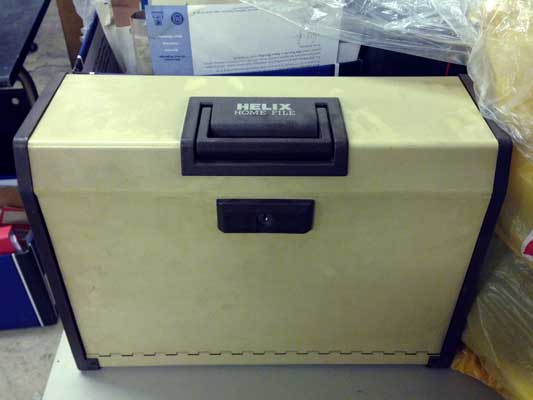 What the heck is that? After fumbling with the lock – there was no key so I broke in with a gentle tug – it fell open to reveal... a... database archive of some kind? It must have been pretty poorly developed because there’s no clickable index and searching looks like it would be a nightmare. 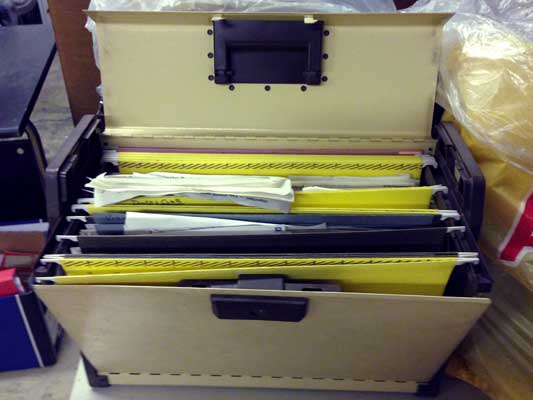 Compare it to the much more comprehensive contacts database below. We have lots of these and, though they don’t have locks, they are difficult little buggers to open what with all the rust. I’m sure the Data Protection Registrar would approve of this security feature. I used a screwdriver to prise the drawer free for this photo. Perhaps the DPR won’t approve after all. 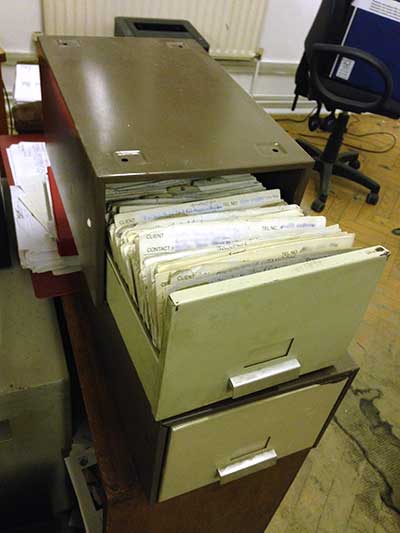 Curiously enough, I found a dusty shelf stacked with half a dozen untouched Rolodexes, one still sealed in its retail box. Clearly they were considered too space-age for use in this particular office.

When I came across the filthy old case showing in the photo here, I got quite excited because it reminded me of a 1960s portable record player my parents used to own. 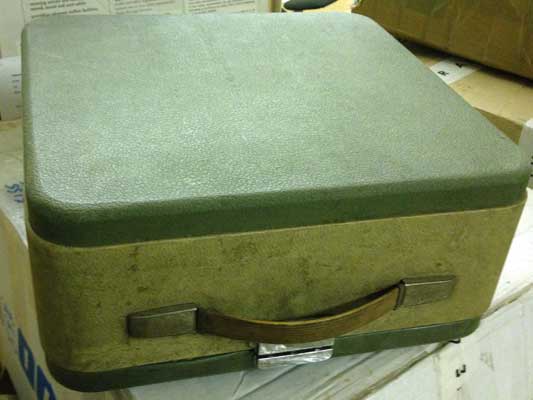 My initial disappointment upon opening it turned to joy as I discovered what I think is Apple’s first laptop. The mains lead is missing but there must be some latent battery power because I booted it up and the built-in printer still works. It did not, however, tell me that it was glad to be out of its bag and I noted that only one font had been installed. 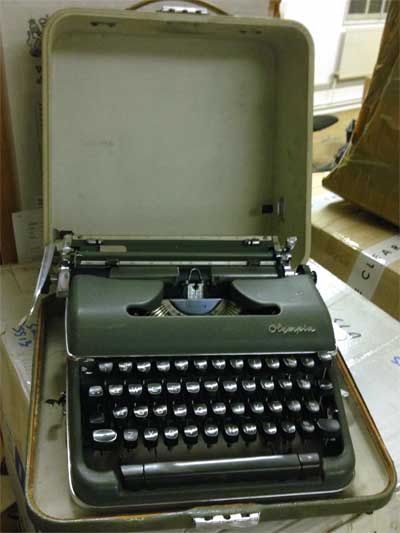 Under a crusty plastic dusty cover – judging from its condition, I can only assume it was designed to keep dust both above and below the sheet – I chanced upon a mid-Elizabethan desktop PC unusually fashioned in "mushroom grey" - the 1980s term for "dirt". I’m pretty sure I taught myself Basic on one of these and it’s still pretty good at Ascii art but the thumping spacebar action makes the office windows rattle. 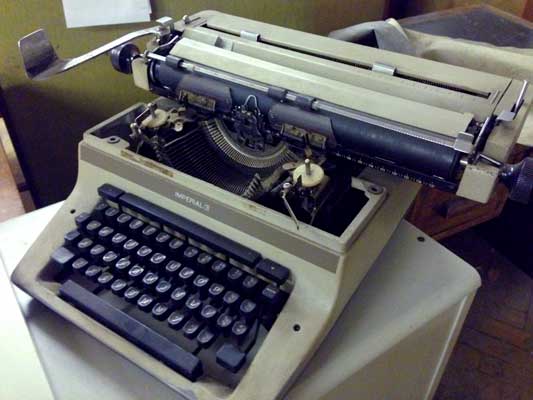 The anti-dust cover over the type bars is missing but I always thought those ionising gadgets were a waste of money anyway.

As I continued to search the office, I discovered a dozen more similar machines, mostly shut away in metal cabinets. This reveals a great deal of foresight on the part of my predecessor: it would be shame to succumb to one of the many notorious typewriter ram-raids we regularly read about on the webanets. 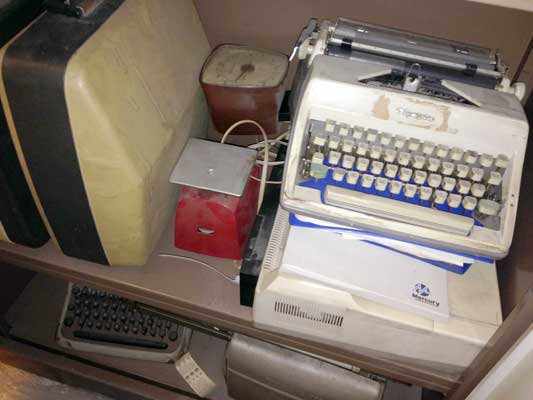 Also uncovered: 20 broken push-button phones, three dial phones with real ringing bells inside them, and a decommissioned Royal Mail franking machine accompanied by an engineer’s report stating that the office manager had chosen to keep the device after its decommissioning.

Hmm, strange bloke. Why would you keep hold of an office machine that doesn’t work? Anyone in their right mind would dispose of it immediately. That’s precisely what you or I would do. It’s not as if people like us hang on to broken or obsolete electronics unnecessarily, thereby cluttering up our working space with useless shit in this day and age, is it?

More disconcertingly, I stumbled upon a number of articles hinting at the private working lives of an earlier generation. One filing cabinet drawer contained a pillow and the one below it was stuffed with used bedding. Did office workers of the 1980s regularly camp out at their places of employment?

Still, nothing would prepare me for what I found in the drawer at the bottom. 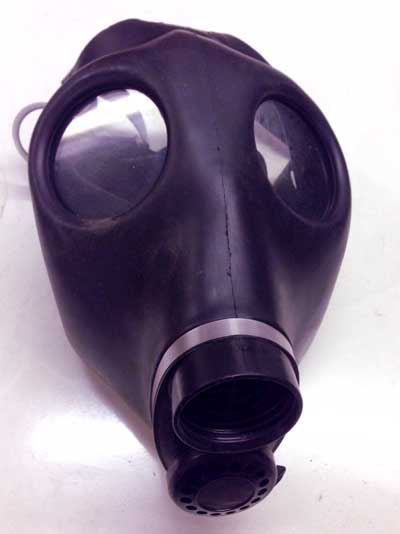 Not one but a whole sack of rubber gas masks, condition as new. I knew my predecessors were magazine publishers but heck, even I know this isn’t standard office equipment... unless I’ve been damn lucky in my choice of employers.

Yet it does go some way to explaining why we have a mysterious black-painted cast-iron safe weighing a million tons in the corner. I have queried my predecessor several times as to its contents but I get a different evasive response each time, and when I ask if there’s a key, he says, enigmatically: “Yes, there is a key.”

I will borrow the pillows and bedding to stay here overnight to keep watch on the safe. Hopefully I can catch the gimp as he emerges. ®

Alistair Dabbs is a freelance technology tart, juggling IT journalism, editorial training and digital publishing. He invites readers to let him know if they are interested in acquiring any of the typewriters. He also wants to make it plain that readers are welcome to take away the ancient office partition screens, especially the ones that smell of sick.