Spam, a lot of it: Bubble tea is the Seoul of wit

Something for the Weekend, Sir? Your Spam Manager is holding 4 messages.

From an email address beginning "realestatetips"? I think not.

Gosh yes that looks genuine, must open that later and run the attachment.

As a literary agent, I suppose.

Now that’s more like it. I like my spam to have a bit of oomph. Come to think of it, I haven’t received decent spam for ages. Spam-blockers are simply too good to let the bulk of it through any more, forcing the previously highly creative spam email industry to shrivel into a dried-up lump of textual blandness in its attempts to side-step increasingly clever email filters.

Real spam – that is, the same sales emails received again and again and again – is annoying and obstructive, of course. But I used to enjoy the various devious and imaginative ways in which some nutter in another country would try to fool me out of my credit card details through the medium of an electronic message full of blatant falsehoods that even a household pet could spot.

Most of us, for instance, used to receive a daily email from some Nigerian pretending to be a lawyer for dubious businessmen trying to launder their millions via my domestic bank account, often beginning with a salutation such as “Felicitous greetings...” or “Merry New Year!!!” as if dictated by Eddie Murphy’s fake Cameroon student in Trading Places.

I even received something similar in the post claiming that I was the sole inheritor of $14.7m from a relative hitherto unbeknown to me, a Mr John Dabbs of Hong Kong, and that I should get in contact with the business relations manager for Chiyu Banking Corporation at his impressively authentic email address teocheng60@yahoo.com.

In the post – just imagine! Output incompetently using an obsolete dot-matrix printer with a used ribbon on shit paper! It’s a treasure. I’m thinking of getting it framed.

File attachments comprising dodgy PC executables and MS Office docs infused with macros had their entertainment value too as merely receiving the message would be enough to send my anti-virus software into fits, sounding off a klaxon and popping up warnings of doom. A bit of oomph, you see?

My personal favourite genre, however, remains the all-but-unstoppable flow of bright and impossibly cheery junk mail sent by enterprising dudes in South Korea during the early Noughties.

No description can do it justice. It was all bizarre photos of weird people promoting crazy products in retina-scorching RGB primaries. Those of you lucky enough to have lowered their spam defences enough to see some of this material can attest to its quality. It was a dayglo age for junk mail.

To get you started, here’s a gentle example from my collection. 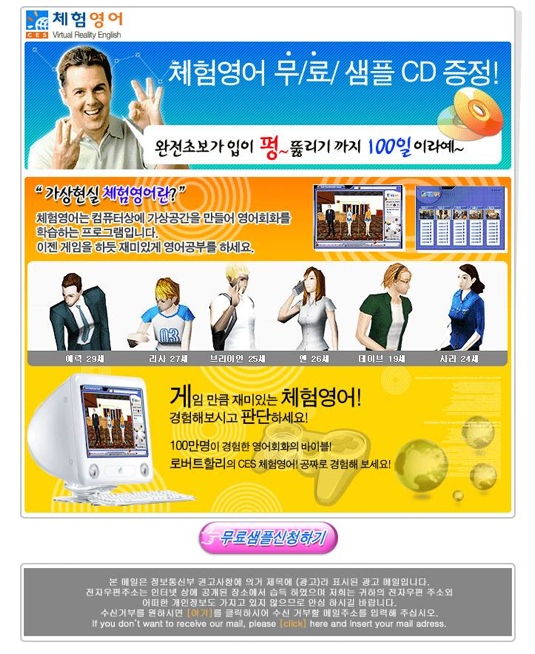 At first look it appears to be advertising Sim City but I think it’s actually a CD for teaching you English. One of the charms of Korean spam is their racial stereotype of westerners as noisy, annoying and irrepressibly happy about something.

If you’re wondering what the bloke’s doing with his fingers, it’s a gesture that used to be cool wid da kidz in certain Asian countries for a while, meaning ‘OK’. His fingers are shaped like the letters ‘O’ and ‘K’, you see? Well, it looks like an ‘O’ and a ‘K’ to Koreans, I guess. 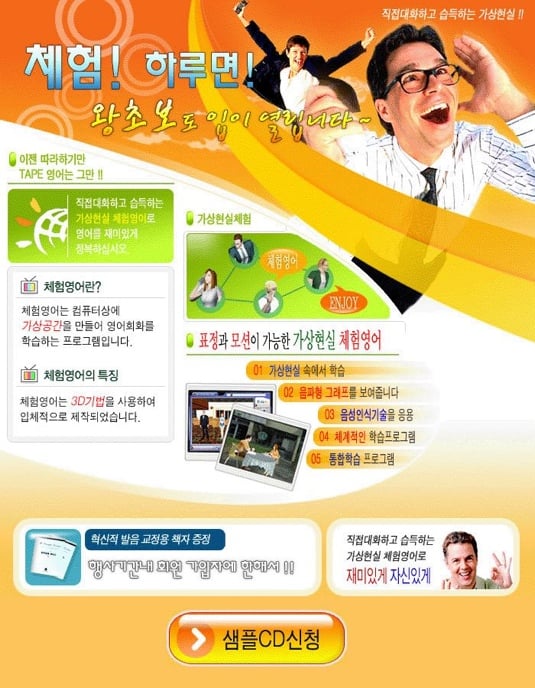 Oh those noisy guys with their big noses and peculiar smell! I can’t wait to shout like them in English one day!

Now let’s deal with gadgets because Korean junk mail exists mostly to flog the kind of rubbish you find in a pound shop. USB-powered fans, desk vacuum cleaners and mug-warmers are the norm here, but the following example reveals a fascinating combination of uselessness and overselling that is all but unique to Korean spam. 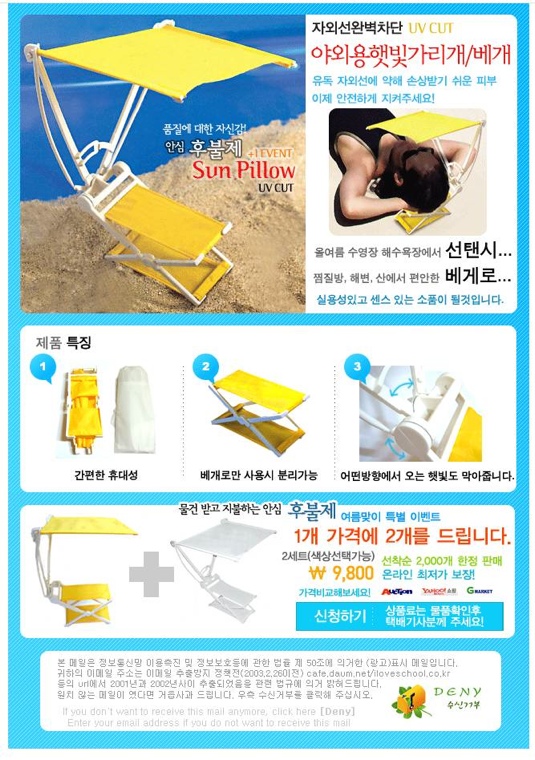 That’s right, it’s a deck chair with its own sunshade – just for your head. Look at those technical details! And you get a second product free, so you can enjoy the extra value of throwing two broken Sun Pillows into the bin for the price of one.

Back to the annoying westerner, in this case a businessman enjoying a vibrating travel cushion a little too much. 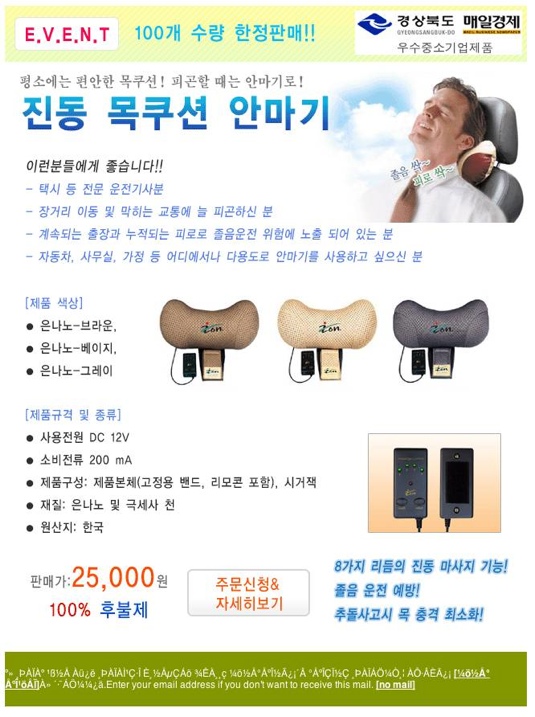 Imagine having to sit next to this man on a long-haul flight to Seoul. My assumption is that he has another vibrating cushion on his lap.

Now let’s introduce racial stereotype No.2: Korean women. In Korean spam, they are either funky or demure but always young and pretty. 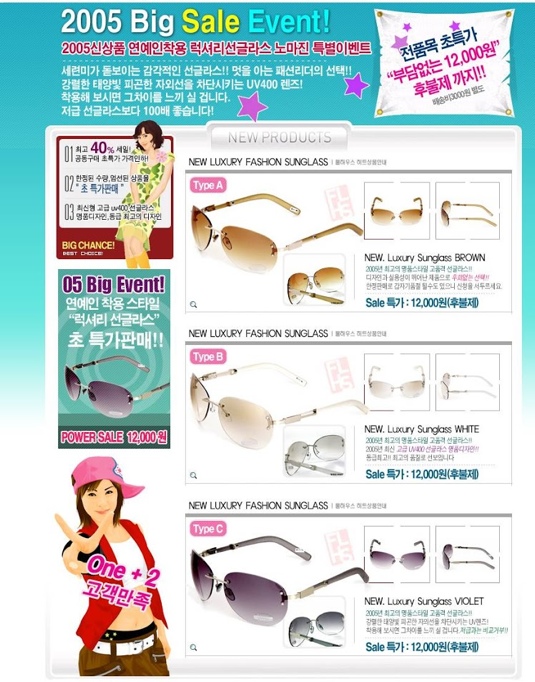 The demure ones are usually cuddling babies or gazing longingly at kitchen appliances. I have one example in which she has a faraway look in her eyes, head tilted to one side, as she hugs a fridge.

The funky ones, when they’re not lounging by the beach with their Sun Pillows, are punked up or staring directly at the reader with a challenging but blatantly suggestive expression. At the bottom of the sunglasses spam is one such, employing a painful demonstration of Korean dexterity to demonstrate “One + 2” – which somewhat incongruously adds up to 3.

Racial stereotype No.3: Korean men are either bespectacled geeks or loin-looseningly handsome. 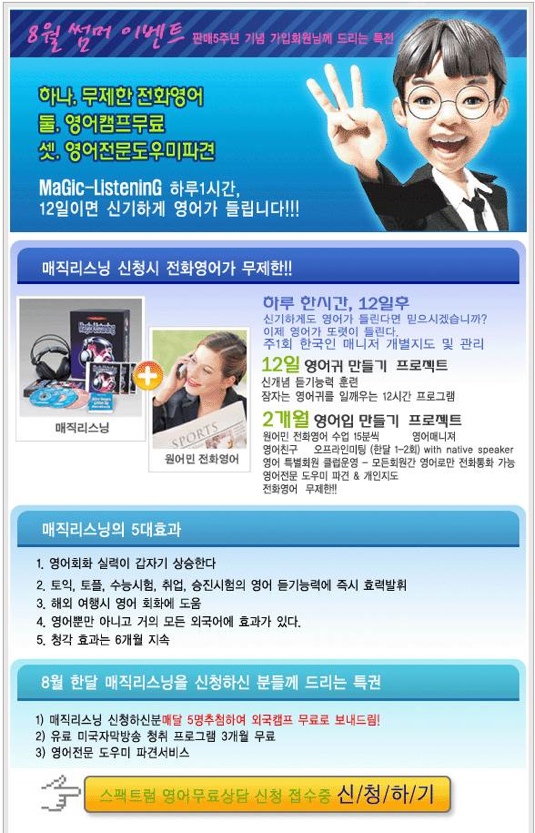 No prizes for guessing which of the two features here. This is the stuff of nightmares. On the other hand, at least he can count up to three, unlike Korean women who are clearly duff at maths what with being women and all. Not like western women who, as you can see, can answer the phone and read a newspaper’s sports pages at the same time.

This next spam email contains no technology but I love it for its powerfully evocative mood of sheer desperation. 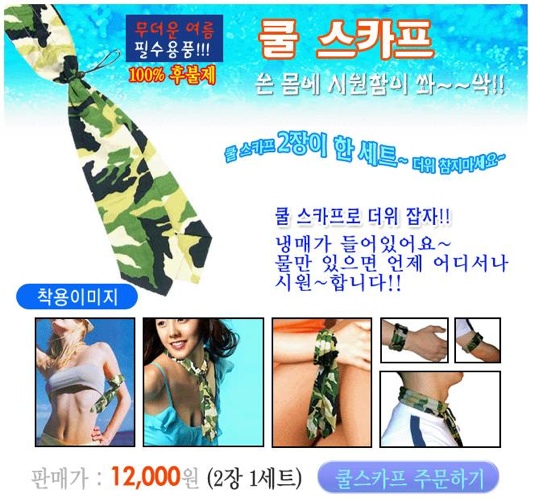 Clearly a Korean Del Boy has acquired a warehouse of nasty linen inexplicably printed with a cheap camo design and has to sell the lot before loan sharks turn up to reclaim his arse one wafer-thin slice at a time. What else is there to do other than to scissor the linen into a million rags and market them as fashion accessories? I mean, who wouldn’t want one of these?

Another common theme in Korean spam is incongruity. 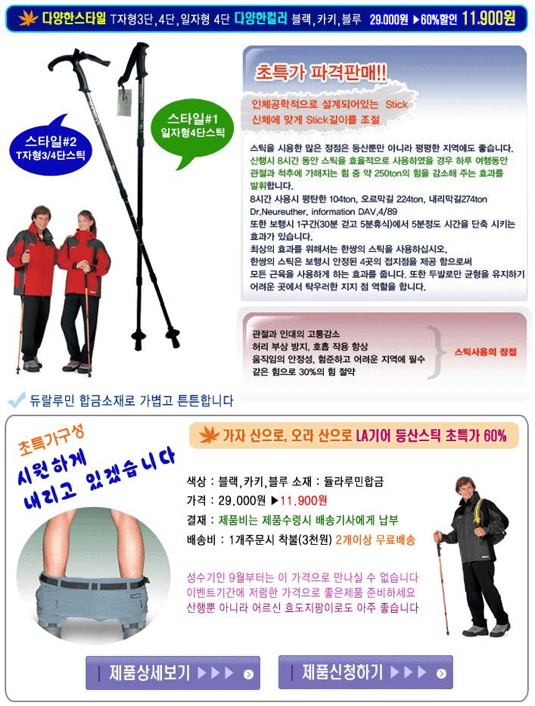 It’s all the funnier when you don’t know what’s going on. If any Korean speakers out there can explain why an ad for hiking gear contains a photo of a bloke with his trousers around his ankles, please don’t. Is he having a pee? Is he inviting someone to store their hiking stick somewhere warm? Fabulous.

Embarrassment is not an emotional condition suffered by models in Korean spam, as this next example also confirms. 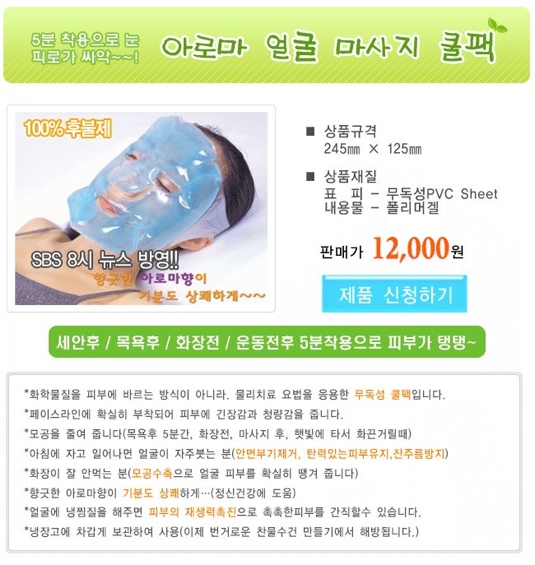 “Mummy, I want a drink of waaAAAAHHH!” And so little Minjoon is traumatised for life.

Let’s round off with Korean spam’s almost religious adoration of gadgetry using, in this instance, and electric air-blowing hairbrush known as the Hair Dr. 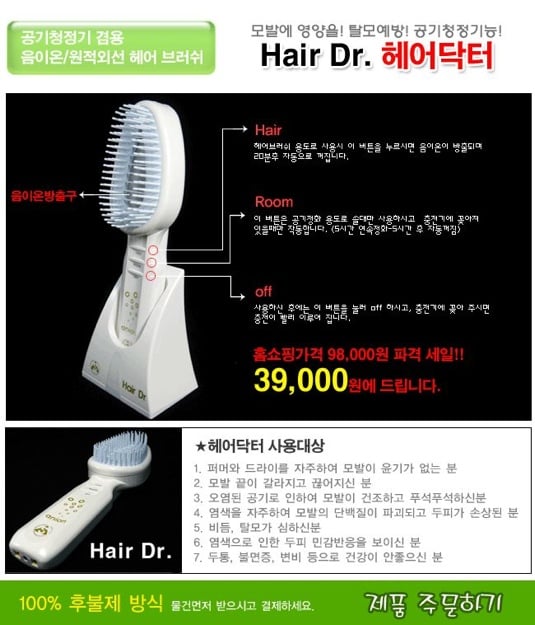 It has three buttons as you can see. One is labelled "Hair", which suggests to me that it’s probably the most important button: god knows what you’d do with this product without it. Another is labelled "Room", so I imagine that when you have finished brushing your hair, you can use it to brush other things around the house such as breakfast table crumbs or cat litter.

Best of all is the long description given for the "Off" button. Honestly, how much is there to say about a button for switching a device off? But in the world of Korean spam, plenty.

To see more samples of fluorescent Korean spam from the last decade, feel free to peruse my collections:

Last week I regaled you with a list of the things I found while clearing out an office full of 1980s junk.

Readers may be interested to learn that we located the key to the mysterious cast-iron safe and opened it to discover not a gimp but... another key. It’s like an episode of Treasure Hunt, which I suppose is in keeping with the whole 1980s vibe. Next week, I’m going to the office in a pink-and-blue jumpsuit.

We tested the key in every lock on every item of furniture in the office and tracked it down to an ancient and unfashionably white metal filing cabinet that unexpectedly but rather delightfully turned out to be stuffed to the brim with 1980s jazz mags – Razzle, Fiesta, etc.

Alistair Dabbs is a freelance technology tart, juggling IT journalism, editorial training and digital publishing. He has received a handful of colourful spam emails from China over the past year but they lack humour, variety and the Koreans’ eye for the ridiculous. Unless, of course, readers here know differently..?

But how will you know when your vehicle's extended warranty has expired?
Networks3 Oct 2022 | 16