The ‘Super-Spectrum Entertainment Engine’ and more

Archaeologic We all know about the ZX80, the ZX81, the ZX Spectrum and its successors, and the QL. But these weren’t the only microcomputers Sinclair Research worked on during its brief life between 1979, when it emerged as the renamed Science of Cambridge, and 1986, the year its brand and products were bought by Amstrad and it was shut down for good.

Clive Sinclair had prompted the development of the ZX80, which was largely an evolution of Science of Cambridge’s MK14 microprocessor learning kit, a board computer based on the National Semiconductor SC/MP 2 chip. The ZX80 was a essentially a MK14 based on a Z80A processor and with a fitted cassette port and TV modulator. The ZX81 was an logical upgrade of the ZX80.

At the time of the ZX81’s release, the Spectrum was in development as the ZX82 and was again an upgraded version of its predecessor, this time with colour graphics and an updated Basic. Even then, though, there were many ideas being bandied about as to what kind of micros the ZX83 and the inevitable ZX84 might be. 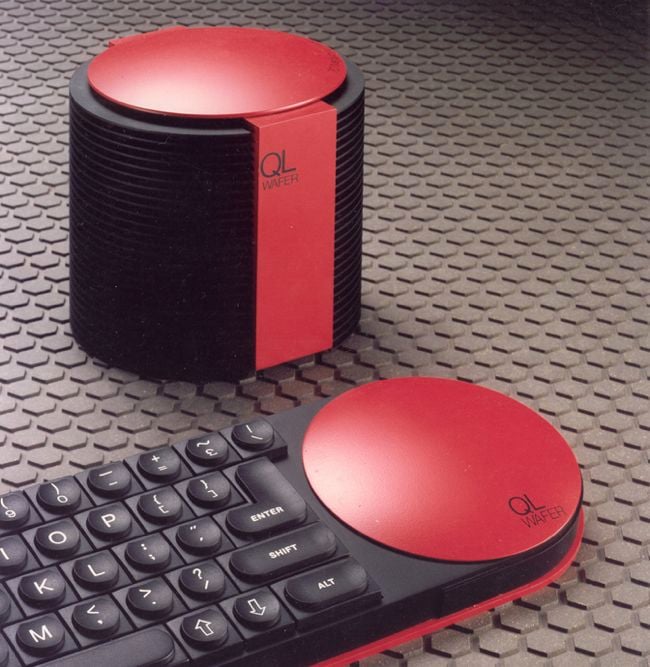 The QL revamped for the wafer-scale era
Source: Rick Dickinson

The ZX83 would eventually become the QL, but not before the codename had been attributed to a number of possible machines that Sinclair managers and engineers thought they might bring to market in 1983. One was a mobile micro, very likely inspired by the March 1981 launch of the Osborne 1 portable computer, and this notion of a portable computer for business users would tax various Sinclair engineers for the rest of the company’s life. It was briefly attached to the ZX84 codename.

Clive Sinclair’s desire to build a mobile computer that, crucially, could operate as the user’s sole machine and not as an adjunct to a desktop would eventually be realised through a product named "Pandora", and development work was proceeding on the device when Alan Sugar formally took over in April 1986.

Sugar killed it, but in doing so allowed Sinclair engineers soon employed elsewhere to move the project on without being hindered by the baggage that working at Sinclair had involved: specifically the need to incorporate the company’s flat-tube screen technology. The result was the LCD-based Cambridge Computing Z88, a much better product than Pandora ever came close to becoming. The Z88 was “one of [Clive Sinclair’s] best products”, says Perran Newman, who led the Pandora team after working on the C5 electric vehicle.

Sinclair’s failure to build a working mobile micro ensured Sir Clive was never credited with developing Britain’s first laptop computer. That honour goes to Thorn EMI, which built and released the battery-powered Liberator in the year between the summers of 1984 and 1985, while Sinclair Research was completing the QL and, later, developing the Spectrum 128.

Sinclair also missed out on producing the first British games console, as we’d understand the term today, when a project dubbed the Low-Cost Colour Computer - aka LC3 - fizzled out when its two key developers got working on other, more pressing projects.

The QL itself might have been the means by which Sinclair released the first British 16-bit home computer, if the business machine’s development team had been given extra time to adapt their hardware to become a platform for future Spectrum-branded machines. They tried, but under the tight development deadline they were working to, they failed and the idea was dropped.

The QL was never the great success Sinclair hoped it might be, but it might have been had more time been granted to its development and features considered for a later, second-generation model, codenamed "Tyche". These included a 3.5-inch floppy drive in place of the Microdrives, a full 68000 processor instead of the QL’s cut-down 68008 and a mouse-driven graphical user interface. Tyche would have provided all of those had it got further than the drawing board. Its GUI would have been Digital Research’s Graphical Environment Manager, better known as Gem.

Gem was ported to the 68000 for Atari’s ST during the last quarter of 1984 and the gaming power of the ST but more particularly of its 68000-based rival, Commodore’s Amiga, prompted two Sinclair engineers to propose an Sinclair alternative, codenamed "Loki". Like Pandora and Tyche, it never survived the Amstrad takeover. Ditto projects like Janus and Proteus, or even left-field options, such as "Dylan", conceived as a low-cost PC clone that might succeed where the QL had failed.

This, then, is the story of some of these great Sinclair "might have beens".

Martin Brennan joined Sinclair Research in 1982 specifically to investigate and develop new artificial intelligence algorithms, but he soon became wrapped up in broader efforts centred on bringing Sinclair’s promised Microdrives to market. Brennan eventually engineered the ZX Interface 1 through which the Microdrives would connect to the Spectrum.

But Sinclair Research wasn’t the kind of place where engineers were told to work on specific projects to the exclusion of all else. The company hired young, brainy people and gave them space for their natural creativity to flourish.

One of Martin’s ideas: a really cheap machine that could bring punters in through its gaming capabilities but provide scope for expansion so they might build it up into a full computer in due course. Designed to be inexpensive, it would perhaps replace the monochrome ZX81 and certainly protect the Spectrum from Far Eastern rivals feared to be on a mission to undercut Britain’s market leader.

There was a template for such an expandable system: the Mattel Intellivision. Launched in America in 1979 but not made available in the UK until 1982, the Intellivision had been developed as a games console to rival Atari’s massively popular VCS 2600. Unlike the Atari box, the Intellivision was created with the idea that its console hub could, with the addition of a bionic keyboard add-on, become a true personal computer.

The Intellivision Keyboard Component, as the add-on was called, provided extra memory, a cassette interface and a 6502 processor. Essentially it was a computer in its own right, using the console as a TV-output peripheral. It proved hard to engineer, and was late to market. 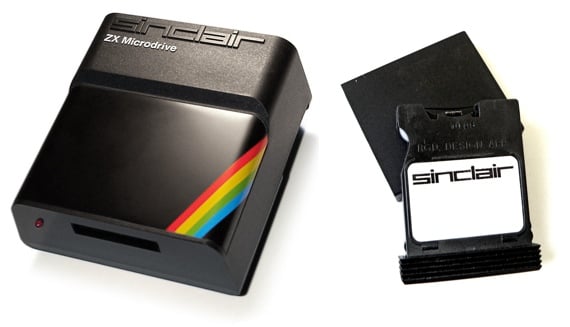 "Simple black box with a ROM slot" - the inspiration for the LC3’s look?

LC3 would avoid these problems by starting out as a computer. The notion was to fit it with a Z80 processor, a little bit of memory and enough ROM for the operating system, which would load games in off ROM cartridges. It was envisaged as a small black box with a ROM slot in the front, says Stephen Berry, the Sinclair software engineer Martin Brennan got working on the LC3’s OS and Basic interpreter while he worked up a prototype motherboard. It’s not hard to imagine the visual inspiration: the ZX Microdrive itself.

Not that LC3 ever got as far as an industrial design. Breadboards were built with TTL to provide Berry with hardware on which to run his code, but the project doesn’t appear to have progressed any further than that. Berry says he was shifted to more pressing matters: wrangling the documentation for the QL, for one, a task that took him many months of full days and weekends of work to complete.

There was no time for the LC3 until all that was done, and by the time the QL manuals had been completed, around June or July of 1984, the LC3’s time had passed.

“I wasn’t at Sinclair for the LC3 but was for Loki, and LC3 only ever got mentioned in passing,” recalled Quondam Sinclair programmer and occasional Register journalist Rupert Goodwins in 2002. “I remember seeing a ULA design for it, but it was only pulled out of a cupboard for nostalgia reasons.”

More than 30 years on from those days, details of the proposed specification, beyond the basic notion of implementing very little memory in order to keep the price as low as possible, remain vague. Stephen does recall some of the work he did on the software. The operating system, he says, was built out of a “little kernel” capable of multi-tasking. He may not have completed support for windowing - really just segmenting the screen into arbitrary independent areas - but he certainly built in the hooks for the mechanism behind such a system to be added later. “The design had to overcome the twin restrictions of low processor power and limited amounts of memory,” he says.

“The LC3 OS was indeed written, in skeletal form,” said Goodwins in 2002. “[It had] multitasking, windowing and was potentially very fast - a complete context switch in around a hundred T states, ISTR. I don’t remember it being resurrected for Loki, but some of it may have been unearthed for Pandora.” Very possible, that, since Stephen Berry later designed the Pandora laptop’s system software.

One way of reducing the cost - and dealing with a low memory capacity - was to fake up a bitmapped screen by making use of a character-based display, Berry says. Text VDUs store a small grid of Ascii values which are used to look up appropriate entries in a character matrix table accessed by the display processor. Change those character matrices - essentially treat them all as variable user-definable graphics - and you can replicate a bitmap screen and use less memory. Or so the theory went.

Could the LC3 ever have come to market? That would have hinged on the Spectrum: would it have become cheap enough to produce for the price to be cut to around £50 or less, what Sinclair was selling the ZX81 for. Sinclair Research’s managing director, Nigel Searle, was, according to several ex-Sinclair staff, entirely unwilling to risk the company’s cash cow. That, plus the fact that an attempt to sell ROM cartridges for the Spectrum was a woeful failure - why buy £20 cartridges when tapes could be had for less than a fiver? - show that the economics would have to be very advantageous if the LC3 was to succeed.

Whether Brennan and Berry got an official go-ahead to begin development of the LC3 is unclear. Quite apart from the freedom Sinclair Research engineers enjoyed, the company was never one for formal approval processes and sign-offs. A nod from Clive Sinclair, Nigel Searle or even Jim Westwood would have been considered sufficient. However, unlike some projects, the LC3 did get beyond the proposal stage, and was even considered by management when the company’s leaders met in November 1983 to ponder the firm’s activities in 1984 and beyond. Since no serious Asian threats had emerged, and Spectrum production was getting cheaper, a line was drawn through the LC3.

“I still think the LC3 was the best approach,” said Sir Clive in a 1986 post-sale interview with Sinclair User. “It was a complete colour computer, entirely on two chips - very much like the Japanese Nintendo machine but many years beforehand.”