The ‘Super-Spectrum Entertainment Engine’ and more

If it had ever been produced, Loki - just a codename, not a go-to-market handle - could have been Sinclair’s post-Spectrum 128, next-generation home computer. But it was never to be: it was an early casualty of Amstrad’s acquisition of the Sinclair brand and Sinclair Research’s IP. “Loki didn't ever really get anywhere,” said former Sinclair engineer Martin Brennan a few years ago. “It had a name but there weren’t any drawings as such. It was a concept.”

His collaborator on the project, such as it was, was fellow Sinclair engineer John Mathieson, who said separately: “The idea was never more than a paper design.”

The team - fellow Sinclair techie Ben Cheese made a third member - began thinking about a new home machine after completing work on the Spectrum 128, a version of Sinclair’s stalwart that had been created for Spanish distributor Investrónica. In 1985, Spanish government decided to tax computers with 64KB or less memory, so Investrónica asked Sinclair to come up with a 128KB version. It was the same tax regime that prompted Amstrad to devise the CPC 472, a slightly more capacious version of the CPC 464 for the Spanish market.

Brennan took the opportunity to revamp the machine, adding not just more memory but also the popular General Instruments AY-3-8912 chip for superior, three-channel sound routed out through the TV speaker, plus MIDI compatibility, a proper RS-232 serial port and RGB monitor output. The Basic was overhauled and given a new editor. 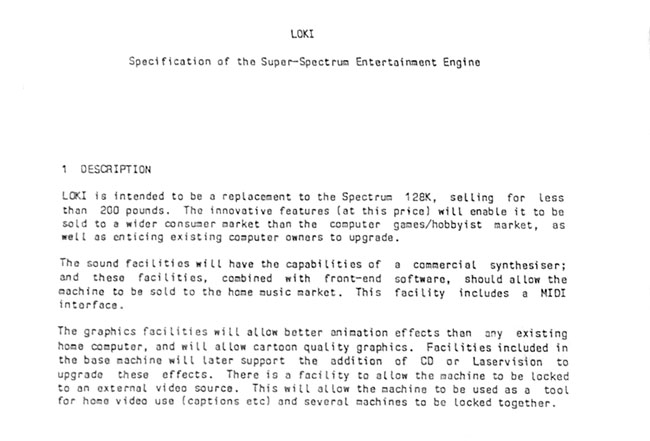 The Spectrum 128 was first demo’d in public in September 1985 on its release in Spain, but didn’t go on sale in the UK until January 1986. By this point, Brennan, Cheese and Mathieson were wondering what to do next.

“There remained a core group of people within Sinclair who wanted to continue selling cheap home computers with dual educational and game playing capabilities - machines that the kids would want and that parents would be willing to pay for. We were impressed when the Amiga came out [in 1985] because as a computer it seemed to fit that role perfectly,” said Mathieson. “We believed that the Amiga was over engineered. It could animate with sprites and with a blitter, for example, but why have both? We figured that if you could implement a system that could animate the screen then you only needed one set of hardware to do it. So we proposed a computer called ‘Loki’ as a Spectrum successor.”

Ironically, the QL was at one point mooted as the foundation for a second-generation Spectrum. It would be based on the same Motorola 68008 processor as the QL, and use the QL’s two custom chips, which were modified during development to accommodate this new role. Yet the notion fell out of favour, and ultimately Sinclair would choose instead to give the existing Spectrum a new, QL-style case and call it the Spectrum Plus.

Had the Loki specifications been defined to any extent? Sinclair User magazine claimed in June 1986 that Loki would feature a 7MHz Z80H processor, 128KB of RAM and two custom chips: one for sound, the other for graphics. The latter would deliver three different modes: 512 x 256 pixels with 16 colours, 256 x 212 with 256 colours, or 256 x 212 with 64 colours. The video chip, dubbed “Rasterop” by the magazine, would have sprite animation and collision hardware built in.

Backward compatibility would be provided for the original 48KB Spectrum thanks to a copy of its ROM, and the Z80H able to flip from 7MHz to 3.5MHz - presumably why this chip, normally rated at 8MHz, was set to run at the lower speed.

Amiga in its sights

Sinclair User described the machine as Amstrad’s next home computer, but the only facts it got correct were the memory size and the presence of CPC 464-style integrated cassette deck. The Spectrum Plus 2, which Amstrad released in 1986 - according to Lord Sugar’s 2010 autobiography, he had his people working on the design before he’d even agreed to buy Sinclair - was a Spectrum 128 with a built in tape player. The magazine’s report now appears as a mix of a glance at the Loki proposal write-up, extrapolations made from it and assumptions based on what Amstrad had already done with the CPC series.

Brennan, Cheese and Mathieson fleshed out their notions with a broad "wish list" specification - something Sinclair Research could achieve if the project got the go-ahead - and this is proposal is what Sinclair User saw and the basis for Sir Clive’s recollection. But Loki never made the next step to become a formal design endeavour, a process which might well have changed this back-of-an-envelope sketch further still.

The proposal describes Loki as a “Super-Spectrum Entertainment Engine” that will replace the Spectrum 128 and sell for “less than £200” yet deliver Amiga-level sound and graphics performance - “the capabilities of a commercial sythesizer... this facility includes a MIDI interface”; “cartoon quality graphics”; “support the addition of CD or LaserVision to upgrade these effects”; “a facility to allow the machine to be locked to an external video source... this will allow the machine to be used as a tool for home video use (captions, etc)” - though the Commodore machine isn’t named directly.

Other features: an unspecified Z80 running at 7MHz, 128KB of Ram, expandable to 1MB and split 50:50 between program and system memory, and the video buffer; display resolutions of 256 x 212 with eight bits per pixel, or 512 x 212 with 4 bits per pixel; “Rasterop hardware performing screen animation, scrolling and line draw”; Spectrum 48/128 software compatibility mode - but “128 sound may be a problem”, the front page warns. 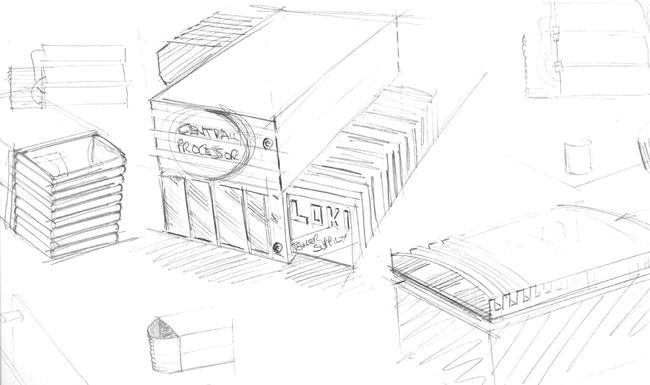 Loki appears to have at least made it to sketch form
Source: Rick Dickinson

It’s a "what we’d like to try to build" specification rather than a description of a computer that can be built. At this stage in the machine’s development, it would taken 12 months to produce a working prototype at least. Yet it got so far as to end up on Rick Dickinson’s desk, from which he worked up a number of sketches. “The Loki was directed absolutely at the games market - unlike any other Sinclair computer,” says Rick.

“The main box housed a massive CPU. Peripherals, including RAM increases could be added until they dropped off the desk - everything you could ever need could just be plugged on. Low entry cost and utterly expandable.” That actually sounds more like the LC3, so it’s entirely possible elements of the older idea were revived for Loki, especially since both came from the fertile mind of Martin Brennan.

If that makes it seem that Loki was more than the ‘only on paper’ notion that Brennan and Mathieson later said it was, perhaps there’s something in that view.

In 1986, after the Amstrad acquisition of Sinclair tech, Clive Sinclair claimed that “Loki... chip designs were under way but there was still quite a lot of work to be done on [detailed] specifications. Basically, we thought if we could do an Amiga for under £200 with decent graphics there’d be a big market. I wasn’t actually convinced of that. There was a danger of running into the same trap as the QL of not giving people what they actually needed”.

Other erstwhile Sinclair staff say the same. “Lots of Loki got breadboarded before Sinclair’s computer bits got flogged to Amstrad, but there wasn’t anything there that could count as an ongoing, coherent project,” remembered Rupert Goodwins a few years ago. “I don’t think such issues as palette switching were resolved, for example. Brennan and Mathieson were notoriously opinionated, and declared that palette switching wasn’t needed as ‘it was only ever good for demos’. Everyone else demurred... But I did see some video capture stuff, the disk drive hardware and some other miscellaneous graphics breadboards.”

Loki never got the green light. After Sinclair shut its doors, Brennan, Cheese and Mathieson set up Flare Technology to turn their concept into a real design, the Flare One. The new machine wasn’t Loki. It didn’t - and couldn’t - contain any Amstrad IP, such as Sinclair Basic or the QL’s SuperBasic.

Rather, Flare One was a machine broadly descended from Loki in the sense that its developers’ heads were at that point full of ideas about low-cost Amiga rivals. The participants’ entirely reasonable desire to ensure no one ever came to conflate the Flare One and Loki would undoubtedly have encouraged them to play down the Sinclair proposal as just a “paper design”.

QEMU 4 arrives with toys for Arm admirers, RISC-V revolutionaries, POWER patriots... you get the idea

Boffins are building an open-source secure enclave on RISC-V