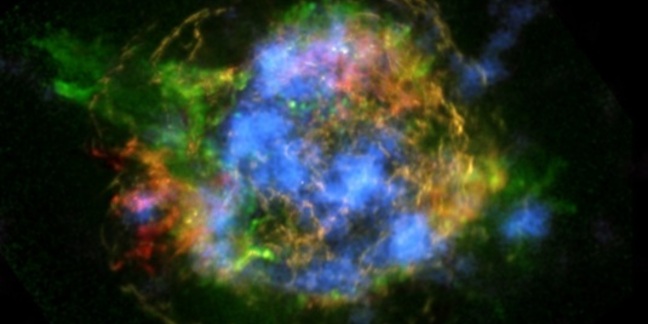 Vid The NuSTAR X-ray space telescope has shown the star Cassiopeia A, one of our most recent nearby supernova, was sloshing and bubbling before its final explosive collapse. 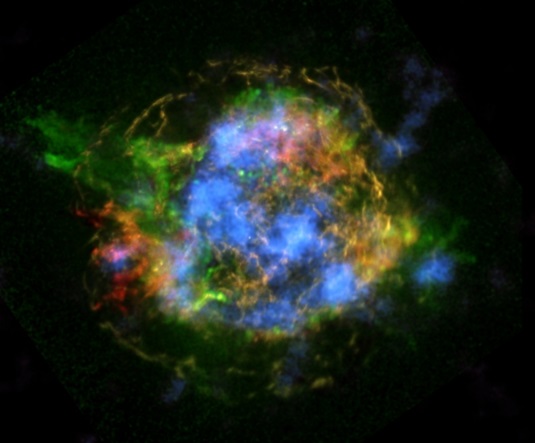 The glowing remains of Cassiopeia A

Scientists have been focusing on Cassiopeia A (Cas A), which is one of the earliest supernovae spotted and recorded on Earth when the light from its death reached us in 1671. Today, recordings from NuSTAR, matched with observations from other orbital telescopes, has given the first radiation map of what's left of the explosion and confirmed a popular theory with astronomers as to how such stellar deaths occur.

At a NASA press conference, Brian Grefenstette, an astronomer at Caltech, explained that two of the most popular theories about Cas A were that it either vented its explosive force using jets of matter from a rapidly spinning star, or that it collapsed in on itself with a sloshing explosion and blew itself apart unevenly.

Judging from the data from NuSTAR, the latter is true. Boffins have used the data and huge amounts of supercomputing time to come up with a model of what happened in the star's final few hundred milliseconds before exploding – and have released the video:

When Cas A went supernova, the internal temperature of the star rocketed as it began to collapse, while contained in the cooler outer shell of the reaction. As the compressed neutrinos were formed in the heart of the celestial body they heated the surrounding matter, which bubbled up through the star, breaking up the outer shell and the ultimately the supernova's shockwave.

This is the first time scientists have been able to see this predicted model of how some stars explode demonstrated in nature, but Grefenstette lamented that the observation, while confirming the sloshing hypothesis, had also raised some troubling questions.

NuSTAR mapped out the position of radioactive titanium-44 in the Cas A explosion, but the sloshy model had predicted that the element (which decays over time to become the calcium found in human beings) would be closely associated with the formation of hot iron in the star's core. In fact, it appears that either the two elements aren't formed together or they are widely distributed, so it's back to the drawing board on that one.

"NuSTAR is pioneering science and you have to expect that when you get new results it'll open up as many questions as you answer," said Robert Kirshner, an astronomer at the Harvard-Smithsonian Center for Astrophysics.

"Supernovae make the chemical elements, so if you bought an American car it wasn't made in Detroit two years ago, the iron atoms in that steel were made in an ancient supernova explosion five billion years ago. NuSTAR shows that the titanium in your Uncle Jack's hip replacement was made in those explosions too. We're all star dust and NuSTAR is showing us where we came from." ®

NASA fingers the cause of two bungled satellite launches, $700m in losses, years of science crashing and burning...