Blocks and Files A just-announced two-node NetApp FAS8040 cluster scored 86,072.33 IOPS [PDF] on the SPC-1 random I/O storage benchmark, with linear scale-out extrapolation suggesting it could do better than the FAS6240's performance.

The list price for the system was a smidgen below half a million bucks at $495,652.43, giving a list price/performance rating of $5.76/IOPS.

There was 84.2TB of configured storage capacity, using 450GB 10,000rpm SAS drives, and the configuration included two 512GB PCIe flash cards, one per node acting as a flash cache. The 8040 can have up to 12TB of flash as a virtual storage tier, but the SPC configuration doesn't list any such memory as a line item. 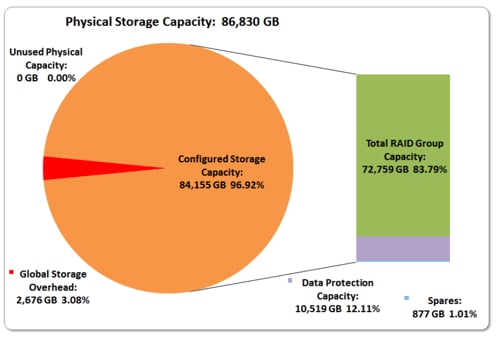 Back to reality, here’s a table showing the FAS8040 result and nine systems below it: 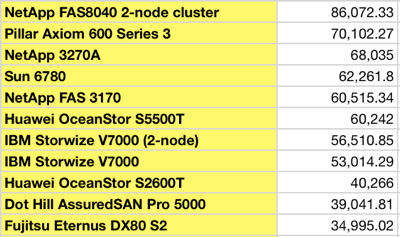 FAS8040 SPC-1 IOPS results and some below it

Let’s look at the systems immediately above the FAS8040: 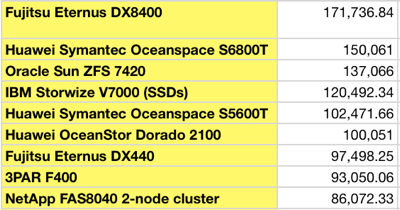 Nine systems better than the FAS8040 on SPC-1 IOPS

The FAS8040 is better than a tested Storwize V7000 configuration using disk drives but less good than an all-flash V7000; that's hardly surprising.

The most desirable comparison, with an EMC VNX, is not possible as EMC isn't exposing that system to SPC-1 benchmark visibility. HP's 3PAR F400 is faster than the NetApp array but not by much. As it's a 2009 vintage design it's not that relevant.

We're left feeling disappointed. Let's load an 8040 up with flash and see what happens. Let's try out a six-node 8060, loaded with flash, and see how that performs. There must be more to come, surely? ®