MWC 2014 The next generation of Samsung's Gear smartwatches is based on its homegrown Tizen mobile OS, rather than Android, the Korean chaebol has revealed.

Samsung unveiled two new Tizen-powered watch models – the Gear 2 and the Gear 2 Neo – at the Mobile World Conference in Barcelona over the weekend.

Like their predecessor, the new watches are described as "essential companion devices," designed not as standalone computers but as secondary controllers for devices such as smartphones, TVs, and set-top boxes.

Hardware-wise, they're a small step up from the earlier Galaxy Gear. Both Gear 2 models feature an unspecified 1GHz processor, up from last generation's 800MHz chip, but most of the other core specs are the same.

Like the earlier model, the Gear 2 and Gear 2 Neo both feature a 1.63-inch Super AMOLED screen at 320-by-320 pixels, 512MB RAM, 4GB flash storage, and Bluetooth to connect to your phone – or in this case, to your Bluetooth headphones. Both new models now include a built-in standalone audio player, so you no longer need to bring your phone with you to listen to music when you exercise.

The new models also add a number of fitness features, including a heart rate monitor, pedometer, and exercise software for running, walking, cycling, or hiking. In addition, they include embedded IrLED sensors for controlling devices that take infrared remotes.

Unlike the original Galaxy Gear, the Gear 2 Neo doesn't come with a built-in camera. The Gear 2 does, though, and it's been upgraded to a 2.0Mp auto focus number that's capable of shooting pictures at resolutions up to 1920-by-1080. The camera is now built into the main body of the watch, too, where it was housed in the strap in the original Galaxy Gear. 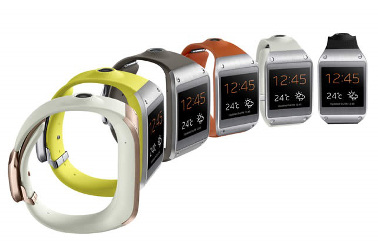 The real departure for the new smart watches, however, is that Samsung has chosen to ditch Google's Android and run them on Tizen, a Linux-based mobile OS that is community developed but is widely viewed as Samsung's baby. (That's why the new watches no longer carry the Galaxy branding, which Samsung reserves for its Android devices.)

USA Today first leaked word that Samsung had tapped Tizen for its next-gen Gear last week, although details were scant. That report held that the watches would be based on "a new HTML5 version of the Tizen operating system," a phrase that remains hard to comprehend. As near as we can tell, Samsung is supporting app development for the watches using PhoneGap (aka Apache Cordova), a cross-platform toolkit based on web technologies.

Samsung's press release, on the other hand, says the new watches are "powered by Tizen based wearable platform," which is plenty vague, in and of itself. Neither Samsung nor the Linux Foundation, which oversees Tizen development, would comment after El Reg requested a clarification.

The two new watches aren't actually the first Tizen devices to hit the market. In November, Samsung announced the NX300M, a digital camera based on the OS.

Notably absent, however – even at MWC – is any sign of a commercial Tizen-based smartphone. Samsung has made a number of prototype units available to developers and it has shown off the OS running on some of its own stock Android mobes, but it has yet to produce a retail product and other hardware partners aren't exactly lining up to manufacture Tizen kit.

Even worse, mobile operators appear to have lost faith in Tizen after repeated delays. First Orange, then NTT DoCoMo backed away from earlier commitments to ship Tizen devices on their networks, suggesting that even if Samsung were to mass-produce a phone, it wouldn't have anywhere to sell it.

As such, shipping Tizen-powered Gear 2 smart watches may be one way to convince hardware makers that the platform remains viable – assuming customers take to them, that is. Samsung claimed to have sold at least 800,000 original Galaxy Gear watches as of November, but many analysts believe the actual number in customers' hands is much lower.

Samsung didn't announce pricing for the Gear 2 and Gear 2 Neo watches at MWC, but said that they would be available globally beginning in April. ®