Boneheads get their knickers in a twist anyway

A new study carried out in the "radiation zone" areas just outside the Fukushima nuclear powerplant in Japan has confirmed that the lifetime health risk to people living there from the damaged powerplant is so small as to be undetectable. Naturally, Californians almost 5,000 miles away are still terrified for their own safety. 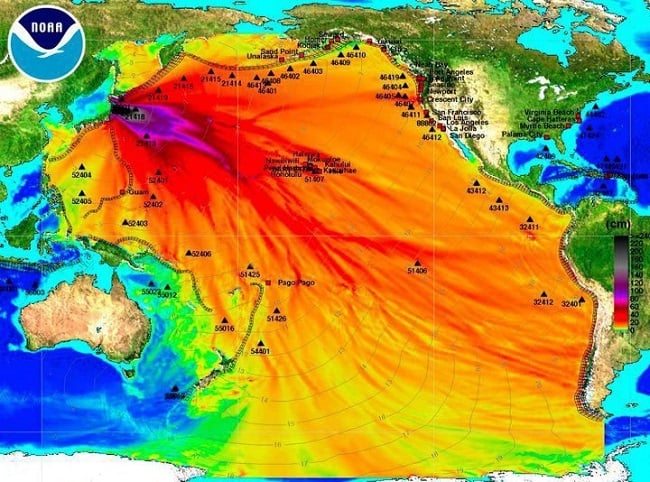 As the San Francisco Chronicle notes, "some Internet sites continue claiming that dangerously radioactive ocean water from Fukushima is showing up along California beaches," and that's all anyone needs to get into a flap in the Golden State. It probably doesn't help that the BBC speaks of an "incoming radioactive Fukushima plume" which is about to "hit the west coast of North America".

But the radioactivity which is to "hit" California will be utterly, completely minuscule. The water in the "plume" which scientists are "tracking" is so radiologically inert that in an entire tonne of it, just one lonely atom of caesium from Fukushima is decaying each second. For context, healthy human body tissues are around 50,000 times more radioactive than that.

"I know that the people in Japan are facing the worst of the conditions but I also worry about my children here in California," California resident and member of citizen action group "Fukushima Response" Maggy Hohle tells al Jazeera. "Will there be high levels of radiation in the air and will my children be able to swim in the Pacific Ocean in the coming years?"

The city of Minamisoma was not only devastated by the March 11 earthquake and tsunami, but it is now battling a silent threat that is potentially fatal: exposure to the radiation that continues to be released following the explosion at the Fukushima nuclear power plant.

And amidst the chaos and confusion, we learned something unbelievable: the children who remained in the zone just 20-30 kilometers from the damaged nuclear power plant were heading back to school.

Next page: Actually you'll suffer a heavier radiation dose living in the USA than you would near Fukushima
Page: