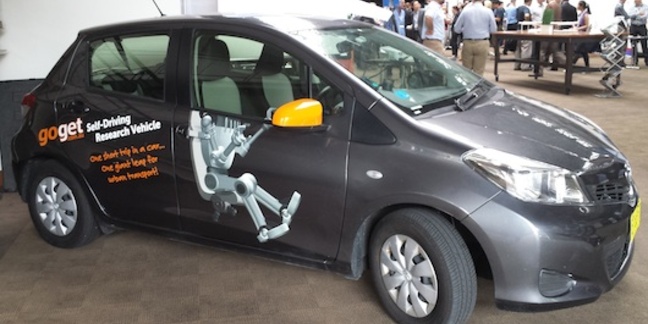 GoGet, a celebrated Australian car-share company, is attempting to build a self-driving car.

GoGet rents cars by the hour to its members. Bookings are made online and a smart card provides entry to the company's fleet of 1,300-plus vehicles. The company offers conventional cars with petrol, hybrid or electric drivetrains, vans, utes (trucks for US readers) and even some prestige cars.

One of its fleet, “Ethel the Yaris*”, now carries front and rear radar sensors installed by researchers from the University of New South Wales' (UNSW) Research Centre for Integrated Transport Innovation (rCITI).

Gathering sufficient data to compile a model for a self-driving car will take time. Ethel is therefore a normal member of the GoGet fleet, save for its sensors, which are collecting baseline data on the obstacles an autonomous vehicle will need to be able to identify and avoid on Sydney's roads.

GoGet and the UNSW researchers know that even once their baseline data is recorded, creating an autonomous car is going to take rather a lot of work, not least because the Yaris' on-board computer has no API. 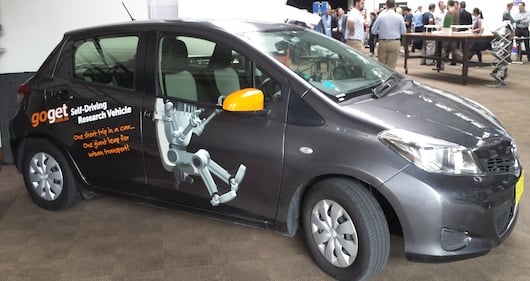 GoGet is therefore imagining how it can put the data it gathers to use in other ways. rCITI's deputy director Vinayak Dixit feels “real-time insurance, where the driver's rates depend on how they drive at that moment” is one possibility. Also under consideration is the prospect of measuring drivers' behaviour and comparing it against the baseline so that those whose driving is identified as better than average can be rewarded by GoGet.

Such applications could, Dixit feels, give drivers greater incentive to behave safely than conventional policing and road safety information campaigns. ®

*Readers beyond Australia may know the car as the Echo or Vitz.

Robotics mastermind admits: I pushed over my 1-year-old daughter to understand balance

Roundup The week's other stories in AI