The Sun ERUCTATES huge ball of GAS at 4 MILLION MPH

Nothing to worry about, however – at least for a week or so

Pics & video NASA has published images and a video of a massive solar flare that the sun belched forth at 4.4 million miles per hour, which lasted from 0039 until 0103 UTC on Tuesday morning, and reached its peak at 0049. 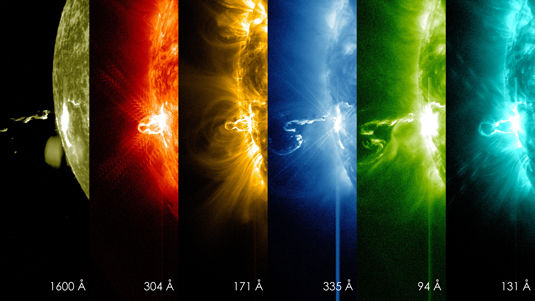 The images were captured by the space agency's orbiting Solar Dynamics Observatory, the mission masters of which, in a blog post aptly titled "Whoa, an X4.9 Flare!", revealed it to be a massive coronal mass ejection, indeed – the largest of this year.

X-class flares are the most intense of such solar events, NASA explained in its release of the images and video. The number following the X in the flare's designation indicates its relative intensity, with an X2 flare being twice as intense as an X1, and so on.

Don't don your favorite tinfoil hat for protection, however. As NASA explains, harmful radiation from such an event can't pass through the Earth's atmosphere to mess with we puny humans on terra firma. It can, however, "disturb the atmosphere in the layer where GPS and communications signals travel."

The US National Weather Service's Space Weather Prediction Center's analysis will also allay any fears you might have. "Although impressive," they write, "the source of this event is well off the Sun-Earth line and the coronal mass ejection (CME) associated with this event is not headed directly at Earth."

They do note, however, that the region of the Sun from which the X4.9 CME was ejected is currently rotating to face the Earth, and that it will be aimed more directly at us in a week or so.

"Stay tuned for updates," they advise. ®