From humble hack to Glasshole: Feels like a platform, not a product

First Look Ever since Google revealed its Glass tech specs, the more enthusiastic members of the technological commentariat declared that we are only weeks away from devices that not only calculate just how much of that Ben & Jerry's triple-cream treacle fudge delight you just ate, but can also figure out its impact on your cholesterol levels and alert nearby hospitals to your imminent attendance and likely symptoms.

The next generation of such devices, it has been assumed, will SMS your nearest and dearest so they can join you in the casualty ward and also let them know there's an Uber hire car around the corner to get them there at a very decent price. Doing so, they'll be told, will help to control that pressure spike your ice cream coma created.

More sober observers recall that way back in 1992 Boeing experimented with a device called a HUDset that workers wore upon their craniums. As explained in this paper from the year that gave us A Few Good Men and Reservoir Dogs, “this technology allows a computer-produced diagram to be superimposed and stabilized on a specific position on a real-world object.”

Other wearables have come and gone since. Motorola, having acquired Symbol technologies, has long offered devices like the RS409 Ring Scanner (depicted in this video), its successor the RS507 Cordless Imager and an accompanying range of wearable terminals.

To say that the existence of such devices has been airbrushed from history's pages is inaccurate: in the rush to emote about smart watches previous wearables have generally been left off the page entirely. The narrative about augmented reality and the kit to deliver it now more or less starts with Dactyl Nightmare, pauses at Minority Report and ends with the tub of Ben & Jerry's above.

That narrative has evolved, in part, because Google has handed out Glass to people it favours. That's not a category into which The Reg falls. Emails requesting a chance to take Glass for a spin have met with polite replies to the effect that they're in terribly short supply.

But at a conference I attended yesterday in Australia, a spatial technology gabfest called GeoNext that's produced some moderately-well-appreciated tales in the past, I had the chance to try Glass for a short time thanks to an exhibitor called buildAR.

Here's what I learned.

Glass is comfortable Even though the right arm is rather more substantial than the left, Glass did not immediately feel unbalanced or weird. I say that having just acquired my first set of reading glasses (middle age is wonderful) and confronting all sorts of odd new sensations as a result. Glass is clearly a well-designed piece of eyewear.

Speech recognition is poor and awkward Have you heard of the author John Scalzi or read his rapidly-becoming-a-classic Old Man's War? It's a lot of fun, not least because it features retirees getting computers implanted in their brains so they can become kick-ass space marines. Most of the characters in the book quickly name their implants “Asshole” and invoke it by saying “Hey, Asshole!” I mention this because the phrase to get Glass going is “OK Glass!”. As a Scalzi admirer, I only just stopped myself from saying “Hey, Asshole!” when trying to get Glass to do something, because saying “OK Glass” is not very intuitive and didn't work very well in the buzzy environment that is a conference's exhibition-on-the-side-during-the-rush-for-sandwiches.

Glass' display has a hinge. The transparent prism wherein Glass' display resides is hinged. It's an important addition because when I put Glass on for the first time I could not see the left fifth of the screen. Nor was the whole screen in focus. A little adjustment made things better, but not perfect. I came away expecting that if one wears Glass for hours at a time, many adjustments will be necessary.

The menuing system is weak Once one has intoned “OK Glass” one sees a menu with four items listed. Moving up or down that menu involves stroking Glass' bulbous right arm. Sometimes that works, sometimes it doesn't. Just how one finds one's way deeper into the device's features is not immediately obvious.

Glass doesn't occupy your whole field of vision You can wear a Glass without having to focus on it the whole time. This makes me think it will be something you dip into, not something that dominates your view of the world.

Bluetooth … meh The Glass I wore had lost its Bluetooth connection, so was not online. From the sighs of the buildAR folk it appears this wasn't the first time this had happened and would not be the last. 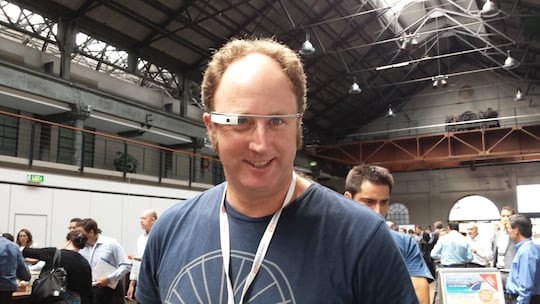 I didn't get to spend a lot of time wearing Glass, so the observations above are very much first impressions. but the buildAR folk told me my initial confusion was not unusual. It takes a solid day of use, they said, before one can begin to explore the device.

I came away from my time looking through Glass with the impression it is currently a platform, not a fully-fledged product. Yes, it will be able to go online on day one and do rather a lot of useful things. But that set of functions won't make it compelling in and of itself. It's a bit like the first iPhone: obviously a remarkable device, but also with abundantly obvious potential to become more so once third parties figure out what to do with it. ®

OK, who is shooting at Apple staff buses in California? Knock it off

While Google agonizes over military AI, IBM is happy to pick up the slack, even for the Chinese military

Big Blue insists it's only for good ol' fashioned research

Cops trick Autopilot into letting them make arrest, save lives