Opinion A "major enigma" has been cracked in atmospheric chemistry, revealing the details of a negative feedback mechanism which could "actually limit climate change from reaching such levels that it could become really a problem in the world". 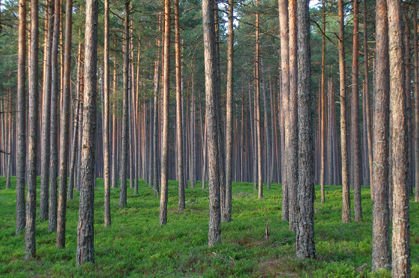 Can't smell the forest for the trees around here

The negative feedback in question is the formation of certain types of aerosol particles in the atmosphere as the planet warms. Some kinds of aerosol, for instance black soot, heat the world up by absorbing sunlight, but most other kinds act to cool things off either by acting as nuclei for clouds to form or by scattering sunlight back into space.

It's agreed on both sides of the climate debate that aerosol effects in the atmosphere are the biggest unknown in forecasting the future. The problem is that some important types of aerosol are formed in very complicated ways and thus it's extremely difficult to say how much of them there will be and what their effects are under a given set of conditions.

But now some important progress has been made. An international team of top boffins, working using new methods, has got a proper handle on a major aerosol mechanism in the atmosphere at last. We are told:

Major enigma solved .... The findings are based essentially on measurements performed at Forschungszentrum Jülich [Research centre Jülich, in Germany] in a special 1450 litre glass chamber using a combination of several recently developed mass spectrometry methods, with instruments from Jülich, the University of Helsinki (Finland), and the University of Washington (Seattle, USA). Combined, these produced one of the most comprehensive data sets ever acquired, showing how organic emissions from trees can oxidize to form organic aerosols.

In essence, the boffins discovered a mechanism which allows chemicals emitted by pine trees - like those found in the vasty boreal forests of the northern hemisphere - to oxidise, grow, and accumulate themselves into airborne aerosols particles big enough to affect the climate much more readily than chemists had previously believed they could.

Warming the world would cause pine forests to emit more of the chemicals in question, and so lead to more aerosols, which would then cause more clouds to form and more of the sun's heat to be knocked back into space. This powerful negative feedback is not included in today's climate models, so they are predicting a warmer future than can be expected in reality.

Previously unknown processes like this could help to account for the fact that the world's temperature, following significant warming in the 1990s, has been stable for the last 15 years or so - a circumstance which climate science is struggling to assimilate.

Exactly how much future warming forecasts should be adjusted downward remains to be seen: but the lead scientist on the new study, Dr Mikael Ehn of the University of Helsinki, tells the BBC:

"If you go into a pine forest and notice that pine forest smell, that could be the smell that actually limits climate change from reaching such levels that it could become really a problem in the world."

The new study is published in Nature. ®