RSA booked TV's Stephen Colbert to give the final speech. This is what happened next 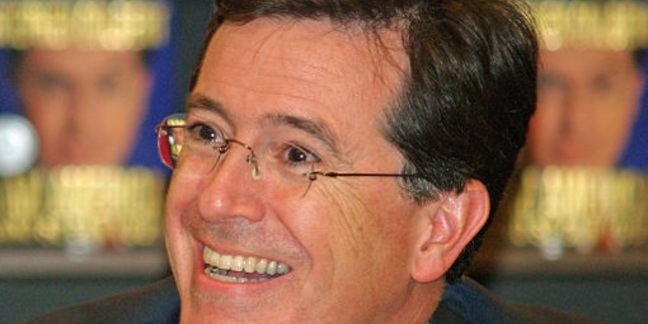 RSA 2014 Comedian Stephen Colbert closed down the RSA 2014 conference in San Francisco on Friday with a characteristically smart yet snarky roasting for his hosts, the NSA, and Edward Snowden.

"RSA developed this conference in 1991 as a forum for cryptographers to gather and talk shop, and I assume breed with one another. Of course officially that's called exchanging private keys," he joked.

Colbert said that he had been asked not to come and speak at the conference after claims that RSA had cooperated on pushing duff crypto with the NSA. This was weird, he said, because he's usually asked not to show up again after he has given a speech. But he decided to come for three reasons.

"First, as a freedom lover I don’t engage in boycotts; I eat Iranian apricots, smoke Cuban cigars, and snort North Korean meth. Two I looked at the signatures on the petition and then looked at my signature on the contract for my appearance here so my conscience is clear, as long as the check clears. Although they didn't give me a check but a stash of Bitcoins from Mt Gox," he quipped.

"But it wouldn’t have been fair for me to boycott the conference because, when it comes to companies accused of playing footsie with the NSA there's no room under the table any more because of all the feetsies."

There was some gentle ribbing of the organizers for their choice of keynote speakers. Inviting Scott Charney from Microsoft was like booking a speaker from an Orwellian dystopia, he said, and the FBI director James Comey was an odd choice. He noted that Comey had said that good security enhanced liberty.

"Well said director," Colbert commented. "I'm sure that under enhanced liberty you can have all the privacy that you want, just like under enhanced interrogation you can breathe all the water you want."

Americans have no desire for privacy anyway, he said. After all, they had voted for the people who voted in the Patriot Act, and who had renewed it twice. Americans also enjoy having their every action recorded, as shown by the TV show The Bachelor.

As for the NSA, he said that the agency showed that if you gave an organization unlimited budgets and no oversight the results were always fantastic. The NSA had built up an incredibly powerful and sophisticated organization that could be completely pwned by a 29-year old with a thumb drive.

"He took top secret intelligence to China and then to Russia - was Mordor not accepting asylum requests?" Colbert noted. "I see the Norwegians gave Snowden 30 Nobel Prize nominations. The guy's practically a war criminal - I don't understand how they could put him up for the same prize they once gave to Henry Kissinger."

While the NSA's successful surveillance campaign had saved zero lives, he claimed, if you were doing nothing wrong you have nothing to hide. And since nothing can be hidden from the NSA, nothing is bothering you.

Colbert said while he was happy Snowden had leaked details of spying on Americans by the NSA, he'd also disclosed how much the US was spying on the rest of the world, which wasn't helpful.

He said that Snowden should come back to the US, maybe after a pardon similar to that which cleared Vietnam draft dodgers, and if he broke the law he should be prosecuted so that there was a full investigation of what had been going on.

Colbert joked that he himself had started his own computer company, called Cloudfog, which used a 20-sided die as a random number generator. He also claimed to have got a foolproof data destruction system which he dubbed "a bonfire."

Unusually for an RSA keynote speaker, Colbert spent 20 minutes taking questions from the audience. During the Q&A he revealed a deep love for the works of Tolkien, that he'd consciously got rid of his South Carolina accent to avoid being typecast as stupid, and that he didn't understand Bitcoin.

"I think Bitcoin is fine," he said. "After all, I don’t understand gold. Gold never loses its value because it's shiny? When the apocalypse comes I'm not going to be investing in Bitcoin or gold. I'll invest in sheep, potable water, and tradable women." ®