It's true, vessels along Airlander lines are quieter than jets when you're standing next to them. But when you're standing on the ground, ducted props driven by Centurion V8s at a few thousand feet wouldn't be as quiet as a cargo jet at stratospheric cruising altitude.

It's true in the same way that a cargo airship could move a given load using less fuel than a jet: but Dickinson's claim that it would be "70 per cent greener" is a bit suspect. As we've established on these pages before, an airship would burn perhaps 40 per cent less fuel to move a given load compared to a plane. The other thirty per cent green-ness comes from the not terribly well-supported idea that exhaust CO2 emitted at higher altitudes is much more ecologically damaging than it would be if released down near the surface: hence low-flying airships are greener than high-flying jets.

Still, at least Dickinson and HAV/Airlander have eased down their predecessor firm SkyCat's claim to be ninety per cent greener than planes. And a 40 per cent fuel saving is definitely good.

Unfortunately an airship takes an awful lot longer to move its load than a jet. The Airlander will probably cruise, like the LEMV, at 80 knots (around 90 mph), as opposed to a jet's 550-odd. This will tend to rule it out of most of the passenger trade, fuel savings or no.

There's always air cargo, but generally things are sent by air because they need to arrive in a hurry: if there's no hurry then ships, trucks and railways will beat airships on cost, energy efficiency and green-ness. Most air cargo travels on passenger flights anyway. There might be a small niche in the business of moving cargo between airports for Airlanders, but probably not.

So Airlander will need to do something else: something that aeroplanes and helicopters can't do.

There is such a thing, of course.

"It doesn't need a runway," Dickinson tells the BBC. "And it can plonk 50 tonnes anywhere in the world you like, which is 50 times more than a helicopter." 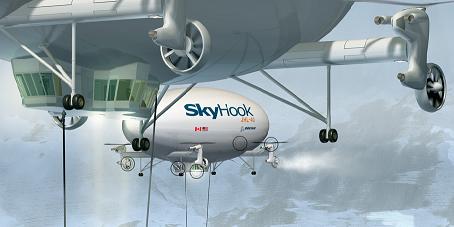 There are a lot of rival plonker ideas out there

Actually there are helicopters which can plonk 14 tonnes or even more - but he's right, there aren't any that can do 50. And he's right again, there are plenty of places that helicopters can't get to due to their limited range. This is why airship enthusiasts tend to envision future ships being used to deliver heavy loads to inaccessible, undeveloped places, perhaps supporting oil or gas drilling or for disaster relief.