Two teams working on the search for dark matter have independently suggested the search could concentrate at a specific X-ray wavelength, following study of data collected by the XMM-Newton space observatory.

While it's not a proof of anything just yet, the two groups – one from the Harvard-Smithsonian Centre for Astrophysics, the other from the Netherlands' Leiden Observatory – have spotted a spectrographic line in X-rays at 3.5 kiloelectron volts, and this line is observed across 73 galaxy clusters.

Readers familiar with particle physics discoveries such as the search for the Higgs boson will be aware that identifying possible energies is a big thing to particle hunters. It's an interface between the theoretician and the experimentalist: “If particle W exists, its decay should emit Particles X and Y, carrying energy Z”.

What's intriguing the scientists is this: that particular energy doesn't match anything we already know about what generates galactic X-rays. Science quotes one of the scientists, Maxim Markevitch of the NASA Goddard Space Flight Center, as putting it this way: “We could not match it with anything that would come from a thermal plasma”.

Markevitch was part of the Harvard-Smithsonian group, whose paper's lead author is Esra Bulbul. Their paper (Arxiv) states “On the origin of this line, we argue that there should be no atomic transitions in thermal plasma at this energy” – which suggests that some other particle interaction is at work. 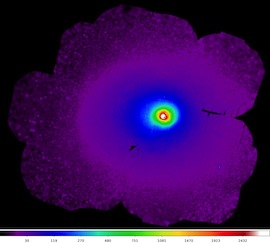 The Leiden group's paper says “Although for individual objects it is hard to exclude the possibility that the feature is due to an instrumental effect or an atomic line of anomalous brightness, it is consistent with the behaviour of a line originating from the decay of dark matter particles.”

Bulbul's paper suggests that the lines may come from the decay of an exotic form of neutrino, a “sterile” neutrino, while acknowledging the problems with this hypothesis.

Sterile neutrinos have been put forward as a possible candidate for dark matter, and would exist only if an active neutrino morphed into a sterile form. The sterile neutrino could then decay into a kEv-range photon and a normal neutrino. According to Science, if the original sterile neutrino started out at around 7 kEv, its decay could yield an X-ray with the right energy to produce the lines observed by the two groups.

The two reports also report good agreement in one of the galactic clusters that was common to their search, the Perseus cluster. While they were viewing the same object, they used different datasets: Bulbul's group looked at the centre of Perseus, while the Leiden team (led by Alexey Boyarsky) looked at the outside of the cluster.

Of course, these results don't end the search for dark matter. The data XMM-Newton has collected isn't of sufficient resolution to give them sufficient confidence to pronounce a proof: for example, Bulbul's paper only assigns three-sigma status to its observation.

Boyarsky suggests that the Astro-H mission to be launched by Japan in 2015 will be able to produce data of sufficient resolution to distinguish dark matter signals from astrophysical sources. Astro-H uses high-resolution calorimeters rather than the CCD detectors aboard XMM-Newton. ®