Review When the Moto X was launched in the US back in August, it was a pretty big deal. Why? Because it was the first handset wholly conceived by Motorola under Google's stewardship, it was assembled in the States itself rather than the Far East, it was available with a dizzying number of personalisation options thanks to the Moto Maker website ... and at $330 it offered good value too. 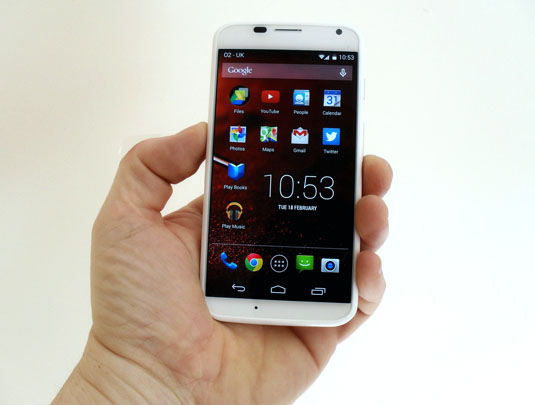 But what a difference six months and a trip across the Atlantic makes. Motorola has now been flogged to Chinese OEM Lenovo, its CEO has jumped ship to DropBox, Moto Maker remains a US-only option, while the "locally assembled" tag is rendered meaningless. Furthermore, the arrival of the Moto G has redefined what an affordable 'droid can be. Indeed, on the latter point, it begs the question if there's space left in the UK phone market for the Moto X at all?

Despite having a larger screen at 4.7 inches rather than the Moto G's 4.5-inch display, the Moto X is a noticeably smaller and lighter device. The differences may not appear much at all – 13g lighter, 1.2mm thinner, 0.6mm narrower and shorter – but it surely does add up. It's not just a case of the Moto X being unusually petite in this era of huge 5-inch überphones, but also that the Moto G is a bit of a lump by comparison. 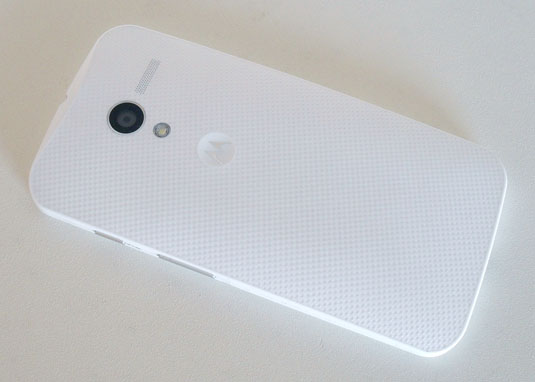 The back looks dimpled but is actually smooth

The Moto G’s apparent bulk in no way detracts from the fact that the Moto X is a supremely ergonomic handset. I’ve seldom held a mobile that feels so natural in the hand: the curvaceous rear - which looks dimpled but is in fact wholly smooth - the gently curved and impressively minimal screen side bezel and the overall size, combine to make the Moto X very easy to hold and use. It’s a solid bit of kit too, helped here by the fixed battery.

We may as well get this out of the way now: as well as lacking a user replaceable battery the Moto X doesn’t have a memory card slot though since it comes in 16GB and 32GB flavours, rather than the Moto G’s 8GB and 16B capacities, this is perhaps not such a handicap. 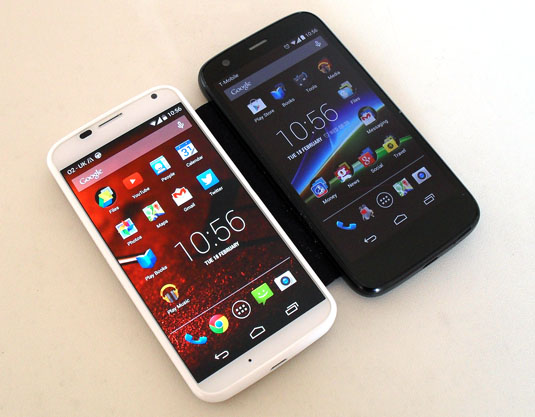 Like the Moto G, the Moto X has a 720 x 1280 display. Spread over a 4.7-inch panel that results in a pixels-per-inch density of 312 compared to the G’s 326ppi. Yet put the numbers to one side and you'll discover there's no visible difference in sharpness. I suspect that, like Apple, Motorola has decided that the headlong gallop towards ever higher screen resolutions on sub 5-inch mobile phones is just a little pointless, unless you have the eyesight of a kestrel.

The big difference between the X and the G is in the screen tech. The X uses a RGB-matrix AMOLED panel to the G’s IPS LCD. This means it is more vivid, shows blacker blacks and is easier to read in direct sunlight. The downside is that it lacks the natural hues you get with a good LCD panel. 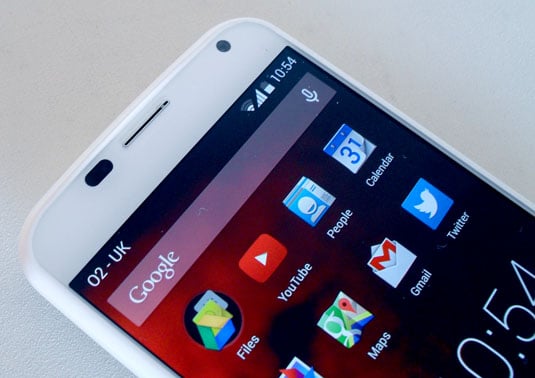 Like the display, the Moto X’s chipset is also a different way to skin a cat. In place of the Moto G’s Qualcomm MSM8226 1.2GHz quad-core component there is a 1.7Ghz dual-core Qualcomm MSM8960Pro Krait chip with 2 rather than 1GB of RAM and an Adreno 320 rather than 305 GPU.

In terms of AnTuTu benchmark scores, the Moto X comfortably outscores the Moto G, turning in results of around 22,500 to the cheaper device's 17,200. The same was true for the SunSpider browser test in Chrome. In the real world though, there is little, if any, discernable difference in performance. 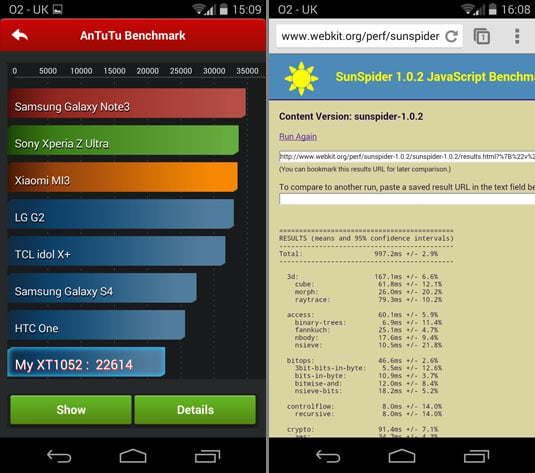 Where the Moto X’s chipset does return a real dividend is in battery life. The Moto X has a larger battery than the Moto G – 2200mAh compared to 2070mAh – which accounts for some of the difference but not all, I suspect. Looping a 720p MP4 video drained the Moto X in 9.5 hours, a whole 90 minutes better than the Moto G managed. A full charge of either handset should get you through a solid 48 hours of medium-to-heavy use.