It's time to check the DNS settings on your broadband gateway, with security research group Team Cymru discovering an attack that could have redirected as many as 300,000 devices to a malicious resolver.

Once a gateway is compromised, the devices behind it would be sent to the attacker's DNS, exposing them to drive-by attacks, bogus bank sites, and other attacks.

The group's whitepaper says the attack exploits routers from TP-Link, D-Link, Micronet, Tenda and others.

In the case of TP-Link, a known cross-site request forgery attack appears to have been used, which allows attackers to inject a blank password in the device's Web interface. Some of the devices seen in the “SOHO pharming” attack seemed to have had their Zyxel ZynOS firmware replaced, again through a known vulnerability. Still others were probably compromised because users left weak default passwords in place. 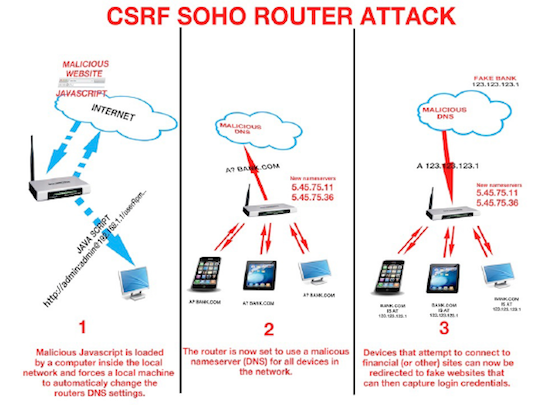 Target devices have their DNS redirected to 5.45.75.11 and 5.45.75.36. Team Cymru's estimate that there could be as many as 300,000 devices in the “SOHO pharming” network is based, it said, on unique IPs sending requests to those two addresses.

“Analysis of these malicious DNS servers revealed a wide range of compromised devices, including models from D-Link, Micronet, Tenda, TP-Link, and others,” the paper states.

While he greatest concentration of compromised kit was in “Vietnam, Italy, Thailand, Indonesia, Colombia, Turkey, Ukraine, Bosnia and Herzegovina, and Serbia”, the attack is global in scale, the paper states. Team Cymru adds that this appears to be a separate attack to the Linksys “Moon worm”.

The mitigation advice is to check devices' DNS settings, restrict or disable remote admin, and if possible, to block access to the attackers' DNS addresses. ®

RPA firms: We have our own process mining tools. Process miner Celonis: We're all about automation now

German biz: You won't need an RPA tool, or not as often. FIGHT, FIGHT!!!

Pandemic has a silver lining for Brit automation merchant Blue Prism: Revenue up 70% for first half of fiscal 2020

Makes sense while enterprises wrestle with new ways of working

Juggling Ansible, OpenShift and K8s? This is for you: Red Hat couples automation to cluster management

There's nothing AI and automation can't solve – except bias and inequality in the workplace, says report