Samples of the new Snapdragon X16 are in the hands of gadget makers, and should appear in products shipping in the second half of the year, we're told. The chip will be fabricated using a 14nm FinFET process.

The X16 offers LTE Category 16 speeds, meaning whatever hardware it ends up in will be able to stream up to about a gigabit a second of data from the internet via mobile phone networks.

Sounds amazing, right? Means fiber-like speeds to your smartphone? Monthly download caps blown away faster than an M16 emptying its magazine? Not quite: due to the antenna design, you must have a very good signal strength, which means being very close to the cell tower, and remaining very still.

Qualcomm staffers told The Register the first uses of the X16 will be in hotspots: imagine a little puck you leave on the table that provides a normal Wi-Fi network and routes your internet traffic via a high-speed LTE link.

The chipset works by using four antennas in a classic MIMO fashion. It's possible for a single antenna on the phone mast to transmit multiple streams of data to a device on the same frequency simultaneously. This means a network operator doesn't have to buy more extremely expensive spectrum space to increase its mobile internet speeds – it can just cram the information into the same band.

How it does this involves a lot of math and powerful signal processing. One technique is called spatial multiplexing: this takes advantage of the fact that signals coming from the tower will bounce off buildings and walls and other objects and arrive at the receiver at slightly different times.

Let's take a really simple example of two antennas transmitting the binary sequence 10101100 on the same frequency: antenna 1 on the mast broadcasts 1010, and antenna 2 broadcasts 1100. Antenna 2's signal bounces off a wall and takes longer to arrive at the device. Antenna 1 on the receiver receives the 1010 first, and then antenna 2 on the receiver picks up 1100. The signal processor then combines those into 10101100. In reality, it's way more complex than this, but hopefully you get the gist.

The chipset has to sense the order in which signals arrive from the mast's antennas in order to know how to arrange future incoming bits. We're told it only needs fractions of a second to negotiate this with the tower.

The above example uses two antennas and one frequency. Today's LTE systems can use two available carrier frequencies with two antennas, as illustrated here: 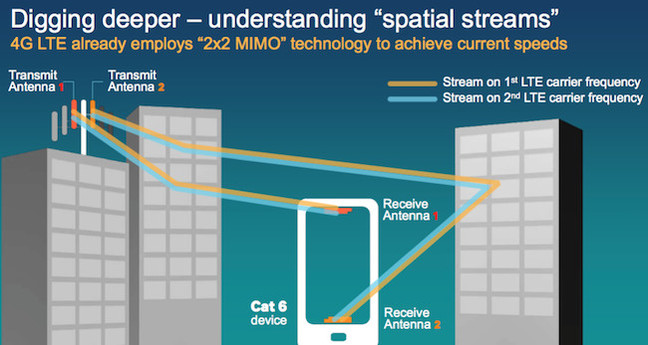 The X16 ups that to four antennas and three carrier frequencies to slurp potentially hundreds of megabits a second: 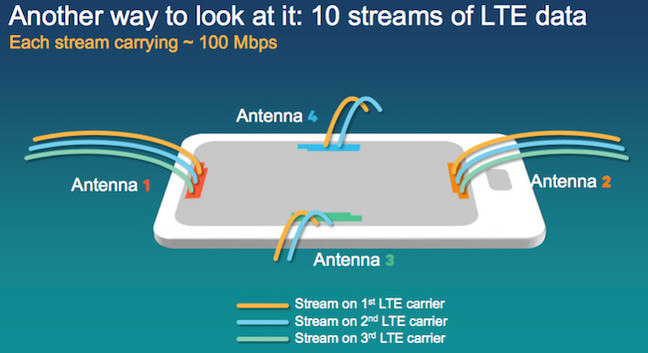 How 10 100Mbps streams adds up to 1Gbps overall ... Don't forget that by LTE carrier, we mean, LTE carrier frequency – not LTE carrier network

Qualcomm techies we spoke to said base stations should require just a firmware update to support the X16 – provided the masts already have four or more antennas fitted. Don't forget you have to be very near the tower, so if suitable masts are spread out around you, you'll have to wander around to find a good spot. The chip also supports Licensed Assisted Access, a global standard for using mobile broadband in unlicensed spectrum, effectively making it an LTE Advanced Pro doodad.

The modem – which Qualy claims is "the first commercially announced gigabit-class LTE chipset" – could eventually be added to a system-on-chip for a smartphone; that's likely to be a year away. The chip pairs with the WTR5975 RF transceiver and a QET4100 part that manages power to the radio electronics. That's a lot of discrete components, which is why you won't see this in a handheld, where space is a premium, for a while. ®