The long war on 'DRAM price fixing' is over: Claim YOUR spoils now (It's worth a few beers)

Ripped off on a 256MB RAM stick? Today's your lucky day 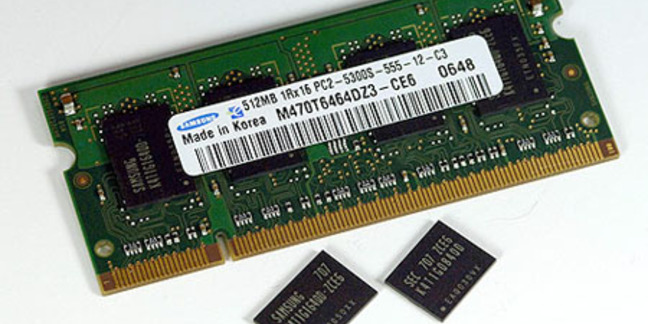 Remember getting hosed on those 128MB DIMM RAM sticks back in Y2K? Well, it's time to exact your revenge: with a $10 payout.

A group of US Attorneys General have agreed to a $310m settlement package with memory chip makers, which is to be distributed among the public, following allegations of price gouging by vendors between the years 1998 and 2002. DRAM makers named in the paperwork include Samsung, Micron, Hynix, Infineon, NEC, and Toshiba. They all deny any wrongdoing, and settled out of court in California.

Under the terms of the deal, US residents and companies can file claims to receive a slice of the cash pie based on DRAM they purchased during the four-year period. The payouts start at $10, and the attorneys say the, er, victims could receive "much more" for their troubles.

The settlements come from a lawsuit first filed in 2007 that accused DRAM manufacturers of price-fixing. The allegations claim that over the four-year period spanning the turn of the century, the vendors sought to gouge customers by colluding to artificially drive up the price of memory.

Various other settlements have been reached previously, including a $300m deal in 2005 between Samsung and the US Department of Justice. The $310m being distributed now is the result of motions brought forward by 33 state Attorneys Generals on behalf of the public.

In order to claim a share of the loot, customers will need to file a claim by 1 August, 2014 through the DRAMclaims website or print out and send in a written claim form.

If, for whatever reason, users want to opt out of the agreement (most likely in order to file a separate suit) the deadline to file is 5 May. ®

Samsung sadly sings of memory, all alone in the moonlight, as downturn slashes profits by 56%

Yes, the chips are still down

Let's check in with Samsung to see how it's riding out the memory glut. Operating profit down 56%. Oops.

Chalk that up as a third quarter of consecutive decline

Did someone say perfect storm? Well, here we are