Hey ladies! Did you know it's cool to work in tech? EU commish Neelie Kroes is here to tell you all about it, after a study claimed that the lack of women in ICT roles was costing the European Union billions of euros. 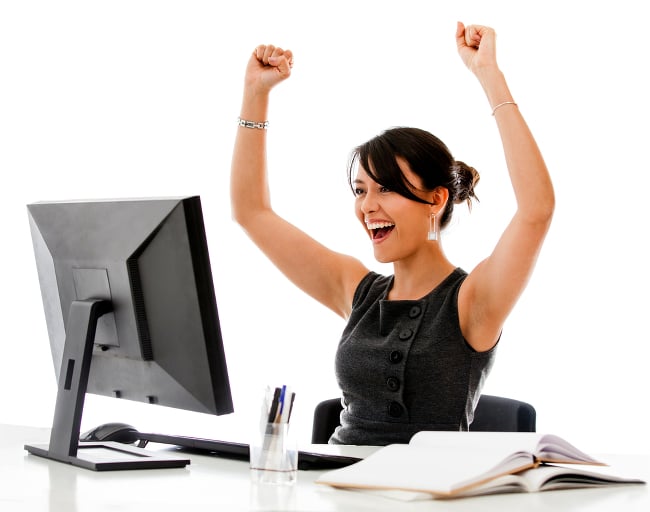 HURRAY! Now that I work in IT, I'm so fun and cool and in the future!

(I really must plug this monitor into something)

Kroes was kicking off a campaign to try to attract women into the technology sector off the back of a European Commission study that showed that women only make up 30 per cent of the continent's ICT workforce.

In comments that manage to be patronising and sexist to both men and women (quite the feat), Steelie Neelie invited women in tech to share their stories to inspire other females into the sector.

"Tech is too important to be left to men alone!" she crowed. "Every week I meet more and more inspiring women in tech.

“ICT is no longer for the geeky few – it is cool, and it is the future! Only nine per cent of app developers are women? Come on! Give coding a try, see how fun it can be!"

Any women out there who already have a "fun" and "cool" job in tech and want to share their stories about life in the digital sector have been invited to post videos to the "Every Girl Digital" Facebook page. If you're a man, you can share your story too, but you'll need to be inspiring the females while you do it.

The campaign, which coincides with International Women's Day on Saturday, was launched after the study found that the best way to get more women into tech jobs was to give them visible role models to aspire to.

The study reckons that if women held digital jobs as frequently as men, EU GDP would be boosted by around €9bn a year. At the same time, Europe is facing a shortage of ICT workers, with more than 400,000 vacancies in the sector last month. The EU expects that figure to rise to more than 900,000 by next year. ®