Was it a cosmic murder? Break-up baffles boffins

Vid The Hubble space telescope has filmed strange asteroid P/2013 R3 disintegrating chunk by chunk as it screams around our Sun.

As announced at the orbiting probe's website here, this particular crumbling space rock is something that's never been seen before.

It all started when two surveys, Catalina and Pan-STARRS, spotted an odd, fuzzy object in the asteroid belt last year, with a follow-up observation by Hawaii's WM Keck Observatory turning up “three co-moving bodies embedded in a dusty envelope that is nearly the diameter of Earth.”

That's when Hubble swung into action, and what it's found is not just surprising but also difficult to explain: the asteroid is in as many as ten pieces – and the breakup is still happening.

The dusty cloud surrounding the once-single-now-multiple object is being spread by the pressure of sunlight, which is by itself an amazing thing to consider. 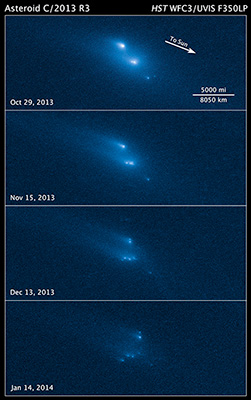 The breakup of comets isn't surprising: they're fragile and pass near the sun. An asteroid is another matter, as University of California, Los Angeles astronomer David Jewitt says: “This is a rock. Seeing it fall apart before our eyes is pretty amazing.”

At Jewitt's UCLA site, here, he writes: “P/2013 R3 does not closely approach any planet or the Sun, so tidal stresses cannot be responsible for breaking it apart.”

Neither does he think it likely that either collision or temperature changes are the cause: “The pieces were not all ejected at a single origin time suggesting that disruption by asteroid-asteroid impact is not the likely cause. Water ice sublimates weakly on R3, producing gas pressures that are too small even to fracture a pile of talcum powder. It is unlikely that ice sublimation is responsible for cracking the asteroid.”

A possible explanation Jewitt's team proffers is that P/2013 R3 could have been broken up by rotational stresses.

The Hubble announcement notes: “The asteroid's remnant debris, weighing in at 200,000 tons, will in the future provide a rich source of meteoroids. Most will eventually plunge into the Sun but a small fraction of the debris may one day hit the Earth to blaze across the sky as meteors.”

The space 'scope team has made an animation of the break-up, which is embedded above. ®