Wanted: Virtual Steve Jobs to tell us one more thing about VSAN 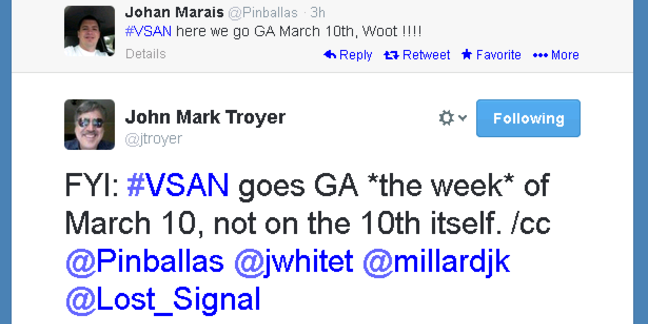 It's a shame that VMware's VSAN launch didn't use Steve Jobs' trick of revealing “one more thing”, because there's one important detail missing from yesterday's event.

That big thing is the price of the VSAN Ready Nodes and VSAN Ready Blocks it's been talking up for a while.

VSAN Nodes are servers equipped with the 10Gbps NIC, at least one SSD and one conventional disk that a server must possess in order to become part of a VSAN. Blocks are “a tested pre-configured set of servers for use with Virtual SAN.”

Pricing is important because, according to VMware employee Cormac Hogan, each node will support only 100 virtual machines.

If that's correct, Node pricing is crucial because it is impossible to consider if VSAN is competitive on price. Thanks to Trevor Pott, we can make an educated guess that licensing costs for VSAN will be about $800 per CPU. We know a VSAN needs at least three nodes.

Trevor and I have since done some more back-of-the-envelope maths. He thinks Supermicro's Fat Twin server is likely to be offered as VSAN node. They're about $6,000 apiece. Throw in another $1000 for an enterprise-grade SSD in each and another $500, times eight, for some 1TB spinning rust. That gets us to a per-node cost of about $12,000, or $36,000 for the smallest VSAN imaginable, if we're being kind and suppose there's a blade chassis with spare slots waiting for the VSAN nodes.

On the upside, there's a whole bunch of other stuff you won't need to buy if you go VSAN. Forget a controller, RAID cards and that fibre channel switch you usually buy for a SAN. But you will need dedupe and compression – VSAN doesn't do that yet.

Before we consider whether total cost of acquisition is less than a conventional server-and-SAN rig capable of handling 300 virtual machines, let's consider whether someone would buy new servers just to run VSAN.

Lots of organisations buy servers quite frequently. For VMware shops, it now makes a lot of sense to buy VSAN-certified boxen on the off-chance they decide to spin up a virtual SAN. If the price premium for a VSAN ready box is not too large, perhaps they will. If it costs a lot more to buy a VSAN node, organisations will need a very good reason to consider one instead of a conventional server.

Might that reason be that even with a premium-priced VSAN-ready server, VMware's new beast is cheaper? When The Reg glimpses price lists for 300-VM-capable rig we seldom see anything less than $50,000 mentioned as the ready-to-roll cost. That's without servers, so VSAN could be cheaper to acquire.

It may not, however, be cheaper to acquire than rival virtual SANs, some of which offer features VSAN lacks. The likes of LeftHand and Nutanix already offer deduplication, for example. The presence of that feature reduces the cost of operations. Even VMware's What’s New in VMware Virtual SAN (PDF) doesn't suggest those features have made it into the new release.

VMware says the VSAN will become generally available in the week of March 10th and that prices will be revealed then. We also know that VSAN Ready Nodes will appear over the next month. Only once details of their respective costs emerge will we be able to figure out whether VSAN makes economic sense.

That leaves many days in which its competitors – who are queueing up to talk virtual storage with The Reg right now – can't quite grapple with VSAN. And nor, dear readers, can you. ®