Get out your Allen keys: Facebook's cooked up flat-pack bit barns

Facebook has revealed the design for its new data centre, to be built in the Swedish town of Luleå.

The new design was discussed at January’s Open Compute Summit. Facebook has now detailed the design and its ambition for a design process “that would look less like a construction project and more like a manufactured product.”

Facebook's first idea was “... employing pre-assembled steel frames 12 feet in width and 40 feet in length,” because “This is similar in concept to basing the assembly of a car on a chassis: build the frame, and then attach components to it on an assembly line. In this model, cable trays, power busways, containment panels, and even lighting are pre-installed in a factory.”

The frame containing these services is shipped to a data centre. That's a different approach to other cloud-scale operators, who have in the past used shipping containers filled with services and racks that will eventually hold servers. Facebook thinks shipping empty racks is inefficient. Instead, it proposes to ship the services chassis to a data centre, safe in the knowledge the building's slab has posts in the right places so it can be bolted into place quickly and easily.

The company has also designed a set of “standard building products like metal studs and preassembled unitized containment panels” that can be assembled on site, an arrangement it feels is preferable to the “ high capacity roof structure” used in its older bit barns that required “a lot of work on lifts and assembly on site.” The new arrangement uses only materials “limited to a width of 8 feet to maximize the amount of material that can be shipped on a flatbed trailer without requiring special permits for wide loads.” 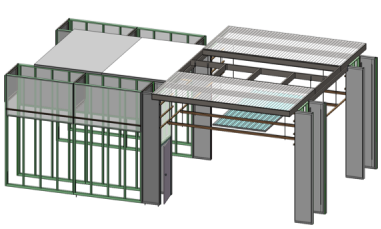 Insert [A] into [B]; Tighten; Insert servers. Your Bit Barn will be operational!

This approach is, Facebook says, "inspired by the flat-pack assemblies made famous by Ikea."

Facebook's willing to put its money where its ideas are: the company says its second bit barn in Luleå will use the new approach, which it has dubbed the “rapid deployment data center”.

It's not, however, saying how much time or money it expects to save. Maybe that's because, as anyone who has made multiple trips to IKEA to retrieve missing parts can attest, even products designed for low cost and easy assembly can go awry. ®