What did you see, Elder Galaxies? What made you age so quickly?

A group of astronomers has spotted 15 massive galaxies that were already mature just 1.6 billion years after the Big Bang.

At that age, galaxies should be youthful entities, still gathering dust and gasses into stars. These 15, on the other hand, as observed today, were grown-ups filled with old stars and exhibited a lack of active star formation. They are, on average, about 12 billion light years away.

"Their existence at such an early time raises new questions about what forced them to grow up so quickly," the Carnegie Institution for Science notes in a press release; two of the research team, Eric Persson and Andy Monson, are affiliated with the Carnegie Observatories.

The results of the observational study, conducted over 40 nights at the Magellan Baade Telescope at Carnegie's Las Campanas Observatory in Chile's Atacama high desert, are published in a paper in the current issue of The Astrophysical Journal Letters sparklingly entitled "A Substantial Population of Massive Quiescent Galaxies at z ~ 4 from ZFOURGE," that last term referring to the FourStar Galaxy Evolution Survey. 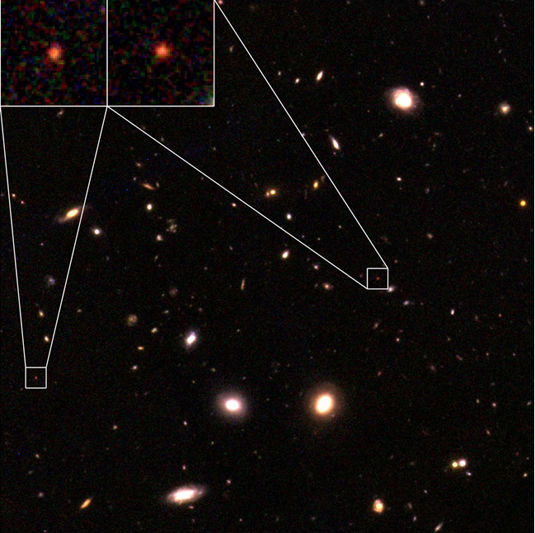 Two of the 15 ancient, mature galaxies found in the Chandra Deep Field South,
as imaged by the Hubble Space Telescope

The observations were done in the near-infrared spectrum, and focused on the Chandra Deep Field South, which had earlier been explored by the Chandra X-ray Observatory, self-described as "NASA's flagship mission for X-ray astronomy." In the near-infrared, Carnegie says, "they are easily measured" and "it can be inferred that they already contained as many as 100 billion stars on average per galaxy."

These mature galaxies are similar in mass to our own Milky Way, which is estimated to be about 13.2 billion years old, and in which stars are still being formed – albeit at a leisurely rate. In these newly explored distant galaxies, however, stars must have formed exceedingly rapidly to be as mature as they were at a mere 1.6 billion years.

"The rate of star formation must have been several hundred times larger than observed in the Milky Way today," Carnegie says.

What was the mechanism that caused these galaxies to form stars so quickly? And why – and how – did they reach maturity so soon after they were Big Banged into existence? Those questions will require further study and cosmological boffinary head-scratching.

As for now, answers are elusive. "It is an enigma that these galaxies seem to come out of nowhere," the Carnegie release observes. ®