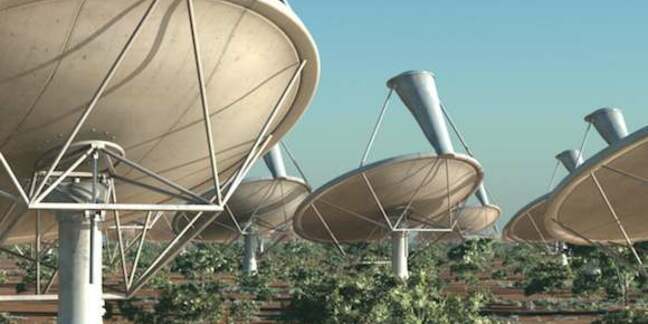 UK science minister David Willetts has announced £11m of funding to help the Square Kilometre Array (SKA) process the expected deluge of data it will produce.

Handling the expected 915-petabyte daily data firehose from the entire SKA radio telescope will require advances in practically every computing discipline: the data will have to be considerably slimmed down before it can either be stored, sent over network links, or used for computation.

That 915PB that the SKA's expected to generate at launch in 2020 is close to a day's worth of traffic on the entire Internet today. By the time it's fully functional in 2025, that figure could be as much as ten times higher.

According to the SKA organisation, the “computing and software for the project … will have a data processing capacity 1,000 times greater than currently available.”

The UK government has now poured £11 million into big data for the project, part of a release of £19 million in SKA funding. That money is being split by the Universities of Cambridge, Manchester and Oxford, along with the University College London and the University of Southampton.

The other £8 million provides four years of funding for the ongoing core SKA project.

Jodrell Bank is the lucky recipient of £100 million in SKA funding grants, as the global HQ of the project. That grant is part of a total £300 million announced for Jodrell Bank.

The largest project in the Jodrell Bank funding is £165 million for the European Spallation Source. As Science explains, this 140-football-pitch-sized instrument “will produce neutron beams [from] a proton beam colliding with a metallic target, a process known as spallation. ESS will be 30 times brighter than today’s top sources.”

There's also £25 million towards the proposed PLATO exoplanet-hunting mission, due for launch in 2024. ®

Wanna be a developer? Your coworkers want to learn Go and like to watch, er, Friends and Big Bang Theory

So no one told you life was gonna be this way

Big Switch to Big Photon for Cisco: Switchzilla to splurge $2.6bn on Acacia

All aboard for 'siliconisation of optical interconnect'