Not sure if you're STILL running Windows XP? AmIRunningXP.com to the rescue!

If you're wondering who is still running Windows XP in this day and age, given that support for the OS is ending soon, the answer is it might be YOU! Or at least, so Microsoft suspects.

But fear not: Redmond has stepped up its outreach program with a new website that's designed to get to the bottom of this mystery, once and for all.

Those blissfully ignorant souls who haven't the foggiest clue what OS their PCs might be running can now wing on over to AmIRunningXP.com and get a straight-shooting, no-nonsense answer to the question that has been confounding them.

If you're all clear, then rest easy. Other than a gentle hint to make sure you've moved all the way up to Windows 8.1, the site has nothing much to say to you. 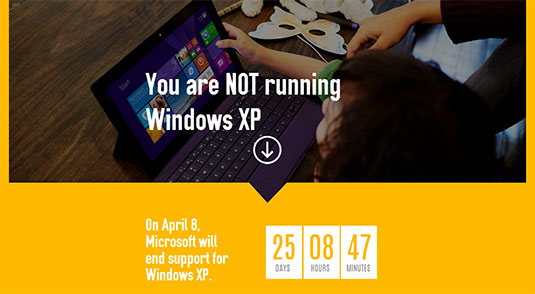 Whew! Well played, mate. Treat yourself to a pint

If XP is detected, on the other hand – SHOCK, HORROR! – the site alerts you to the presence of the offending OS in great, big letters, superimposed over images of similarly outmoded items, including an abacus and a typewriter.

"Windows XP is a 12 year old operating system," the site scolds. "Now is the time to upgrade to a new device running Windows 8.1 for a safe and secure PC experience." 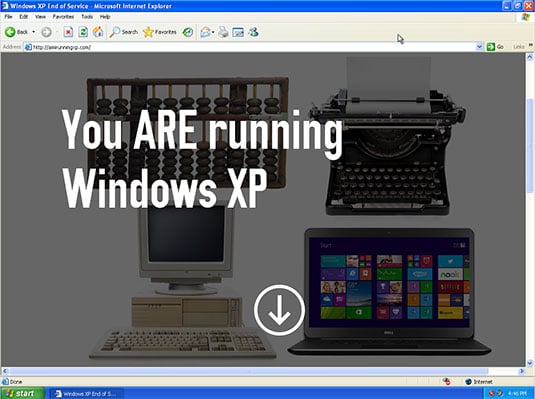 Lest you assume the whole thing is some kind of practical joke, The Reg did some sniffing around. A WHOIS search of the domain reveals that it was registered at GoDaddy to one Kristina Libby of Seattle, Washington on February 26, 2014. A LinkedIn profile for Libby reveals that she is a Global Consumer PR Lead at Microsoft.

A few more searches reveals that AmIRunningXP.com is just one of several tools that Microsoft has created to alert customer's to the impending end of XP support. Another is a free program developed in partnership with Laplink that can move data from our XP systems to our new Windows PCs.

For those who have more advanced memory problems, Microsoft will officially end support for Windows XP on Tuesday, April 8, at the stroke of 3pm on customers' local time. ®