And next year it will be even better

At 1:59 in the morning on Friday, March 14 – or, for convenience, at 1:59 in the afternoon – take a moment to pause and contemplate π (aka pi), as, if you write your date US style, that's the moment to celebrate the universal glory that is Pi Day.

Yes, one more year has come and and gone, and it's again time to continue a tradition created by physicist Larry Shaw in 1988 at San Francisco's museum of science and art, the Exploratorium, and recognized by the US House of Representatives in March 2009 with the passage of House Resolution 224 [PDF].

Pi never ends and never repeats itself – which is why Mr Spock, in the 1967 Star Trek episode "Wolf in the Fold", was able to extract a malicious incorporeal entity hiding in the Enterprise's computer system by ordering the system to compute, at top priority, pi to the last digit, which apparently drove said incorporeal entity to distraction. 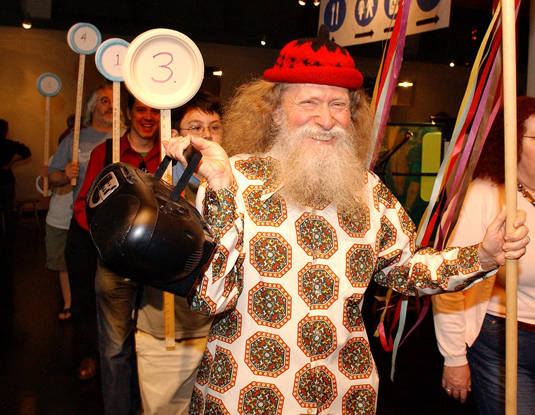 Pi Day continues to be celebrated at the Exploratorium – where, full disclosure, this Reg hack worked from 1981 to 1989 – with a parade led by a celebrant (Larry, we hope) carrying a boom box playing PiTunes, followed by one privileged acolyte holding a sign inscribed with "3." then others carrying 1, 4, 1, 5, 9, 2, 6, 5, 3, and as many other numbers as there are people who come for the festivities. After all, pi has been calculated to over 12 trillion digits, so there's no problem with coming up with enough numbers to supply the parading pi fans.

Pi has inspired other tributes as well, including iPhone apps, a feature film, T-shirts, and one pizza joint in San Francisco and a chain of them based in St Louis – and, of course, there's the Raspberry Pi.

And every true pi aficionado thinks it no mere coincidence that one of the smartest cookies in world history, Albert Einstein, was born on March 14, 1879 – although the chronicles are silent as to whether he was born at 1:59, either am or pm.

So celebrate the irrationality and transcendance of pi this Friday at the 1:59 of your choice. And for those of you who write your dates and times in the US fashion, know that next year the celebration will be held at a different time, though on the same date.

Huzzah! A collection of the theoretical physicist's papers are now online

Time team comes closest it ever has to magical zero result

Einstein's brain to be picked by satellites