Amazon wants me to WEAR NAPPIES?! But I'm a 40-something MAN

Something for the Weekend, Sir? I am a very lucky man: Amazon is offering me a 20 per cent discount.

The cynics among you might try to claim that everything at Amazon is offered at a 20 per cent discount because of its advantageous tax arrangements but that would be the result of confusion. My 20 per cent discount has nothing to do with VAT being 20 per cent – that’s “sales tax” to my rootin’ tootin’ American readers, hoo-wee, dang-at-high-temperature and all that – since Amazon pays VAT.

Well, that is, you pay the VAT: Amazon claims it back. And, if you’re lucky enough to be buying for a VAT-registered company, you should be claiming it back too. If you’re not, I bet you wish you were. We’re all tax-dodgers at heart, you know. Don’t go projecting your own blackened heart on Amazon, you twisted, evil people.

Right, having dug myself out of that particular libel-fraught hell-hole of journalistic laziness, let’s get back to my special offer. I have been lucky enough to be chosen by Amazon to receive a 20 per cent discount on all my purchases of disposable nappies. 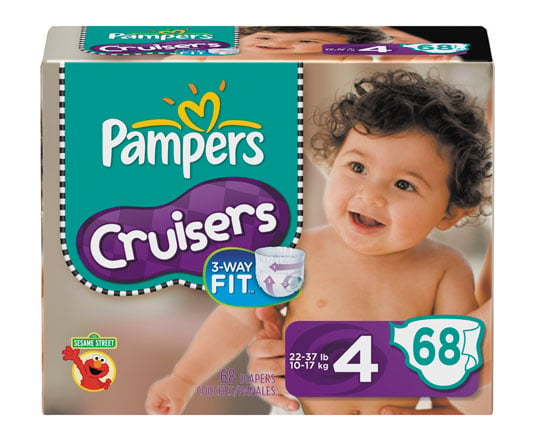 For people of a certain age

When I told my children how fortunate they were to benefit from this turn of events, I was shocked at their lack of enthusiasm. After all, at the ages of 21 and 17, they are fully capable of appreciating the value of maximising a household budget, especially my daughter who is currently living abroad.

As I insisted to my grown-up progeny, this can’t possibly be a mistake. Amazon, Google and all the others have been assiduously tracking, carefully storing and relentlessly re-using information about us. Amazon has known what I’ve been spending my ill-gottens on for years, not just for myself but what Christmas and birthday presents I’ve been buying for friends and family. There’s nothing these Internet behemoths haven’t recorded about us. Heck, Google Street View even knows what our front door looks like. So get those nappies on, kids.

Perhaps the disposable nappies were not intended for them, my children suggested, but for me, reflecting the, ah... special needs arising from my advancing years.

There is certainly some logic to this. In my thirties, companies kept trying to sell me timeshare flats in Spain. During my early forties, when proper men are most susceptible to such things I understand, I received regular invitations to test-drive laughable sports cars and luxury I-have-a-tiny-nob-mobiles.

So now as I approach the big Hawaii, it’s only natural that I should be given 20 per cent off disposable incontinence pads.

OK, ha-ha, joke’s over. What kind of information do these huge businesses actually hold about me? It’s one thing to have my personal life documented, exposed and and shamelessly exploited by devious retailers and another matter entirely to be cyber-stalked by a tax-efficient (see what I did there?) online leviathan that seems to have begun feeding utter bollocks into my little corner of its database.

In case no-one believed me, I printed out Amazon’s email to show everyone how ludicrous it was.

I ought to have seen it coming years ago but was in denial. At one press briefing, held in the last century, I had to listen to a futurist trying to sell us the benefits of buying colour printers for domestic use. Just imagine, a colour printer – in your home! He went on to forecast the end of junk mail being thrust through letterboxes. Apparently, in the future, we would receive our ten types of unsolicited shit digitally via email and... get this... print it out ourselves.

Naturally, during the Q&A, I put my hand up and called him insane. No-one in their right mind would print out unwanted emails at their own expense.

Well, he had the last laugh, that’s for sure. I can just imagine him today, chuckling away at my short-sightedness, laughing louder still and possibly even losing control but always avoiding embarrassment thanks to his copious supply of sanitary pads purchased at Amazon’s generous 20 per cent discount.

Like most people I used to find these personal recommendations from online retailers clever, then a bit creepy, and eventually a cause for concern over my privacy. Now I despair completely because what these guys think about me seems to be evolving into irrelevant whack, just like the old-style junk mail delivered by a postman.

This week’s prime example is Spotify, whose database really ought to know better since it knows every bleedin’ second of my playtime.

Look, it’s a bit embarrassing but my listening habits do not really match my otherwise optimistic, cheerful and happy-go-lucky nature that readers of this column are so familiar with. Apologies, then, but this is the kind of thing that Spotify suggests I might enjoy – correctly as it happens. Sorry about this. 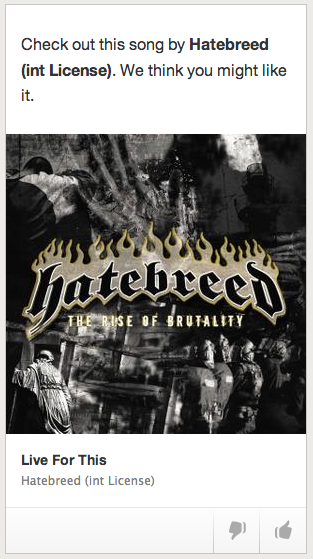 Yes, I know it’s not big or clever and defines me as the antithesis of cool. It’s sad, really. And so it goes on: here’s another recommendation. 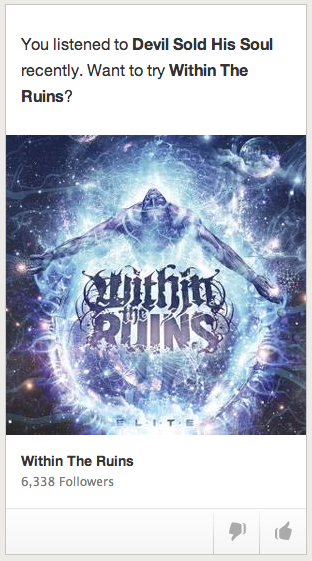 Within the Ruins? Spotify chalks up another correct suggestion

Yes, I realise they probably sound the same to you and I’m painfully aware that they have a penchant for gothic font logotypes in flames. Stereotypes die hard. What can I do?

Anyway, here I am scrolling through Spotify’s recommendations of the day based on the dreadful stuff I have sampled in the recent past. Every now and again, like Amazon, Google Play and the rest, Spotify throws in a friendly suggestion from its more popular products. I do not begrudge them the opportunity to try and sell me Beck or Stone Sour, nor even Tom Odell but only because he studied at the rock music school currently attended by my forthrightly nappy-free 17-year-old.

Then this pops up: 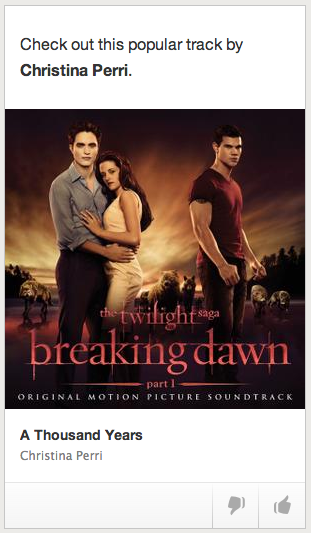 Well, no thanks. What on earth made Spotify think I’d be interested in a soundtrack for sparkly teenage vampires? That’s not even a gothic font, for heaven’s sake, and none of it’s sung like someone gargling brick-dust.

It gets worse. Scrolling down another screenful of recommendations, I come across this: 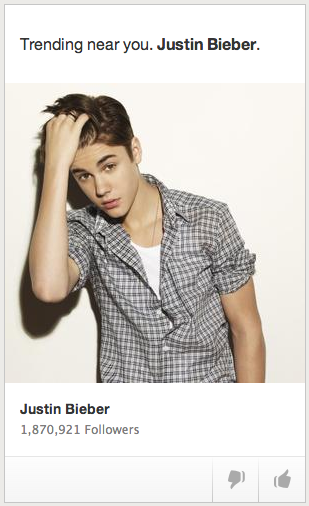 Interesting. What shall I try today, Thy Art Is Murder or Justin Bieber? Oh, the choices! Spotify evidently thinks I am a sicko of the worst kind and is probably passing my details on to the police as I type this.

Well, at least it couldn’t get any worse. 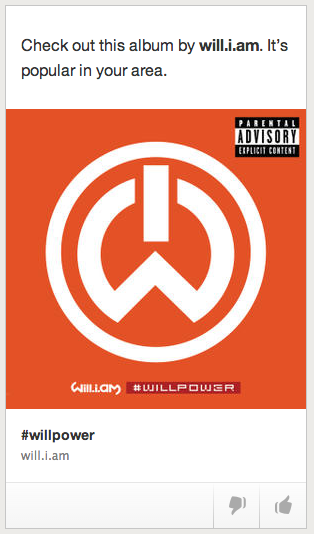 Alistair Dabbs is a freelance technology tart, juggling IT journalism, editorial training and digital publishing. He realises now that trying to cultivate an online persona is a waste of time, and that no matter how much death metal you listen to, the world will take a peek and discover that you’re a closet Belieber or a lover of the art of co– [oh no you don't – Vulture Central's backroom gremlins].