Does your neutrino lose its flavour on the bed-post overnight?

A Japanese neutrino detector has provided experimental evidence for a prediction first made in the 1980s: that passing through something good and massive – like the Earth – will influence the flavour of neutrinos.

Analysing 18-years' worth of data collected by subterannean neutrino detector SuperKamiokande has shown that the detector observes more electron neutrinos (more on this in a moment) when it's night-time in Japan than during the day.

Neutrinos, which interact so weakly with normal matter that even the best detectors only manage to capture small handfuls of interactions, come in three “flavours”: electron, muon, and tau, and they oscillate between these flavours.

The SuperKamiokande detector, which comprises 50,000 tonnes of water and 11,000 photomultiplier tubes, is specific to electron neutrinos, spotting the tiny amount of Cherenkov radiation emitted when a neutrino scores a direct hit on an atom in the tank. These interactions are rare, which is why the experiments are so long-lasting.

With enough data, however, something interesting emerged: when it's night-time at SuperKamiokande, the detector observes 3.2 per cent more electron neutrinos than during the day. In other words, when the detector is on the sun-side of Earth, the neutrinos passing through it are very slightly skewed towards muon and tau flavours, while at night-time, there's slightly more electron flavours for the detector to observe. 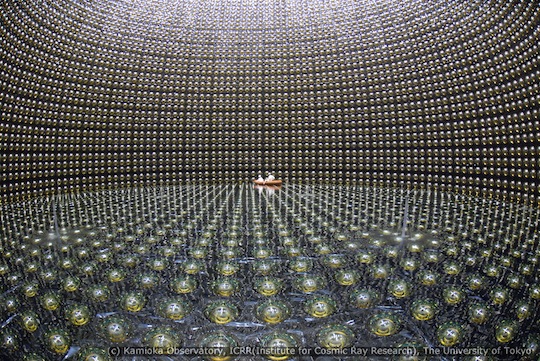 The experimental data, it turns out, agrees with a prediction made in the 1980s called the Mikheyev–Smirnov–Wolfenstein effect. As Physicsworld explains, “At neutrino energies below about 2 MeV, about half of all electron neutrinos from the Sun change flavour before reaching the Earth. For neutrinos of higher energies, however, a larger fraction change, meaning that fewer electron neutrinos are detected.”

Neutrinos that haven't passed through the Earth are arriving at higher energies, meaning more of them arrive as muon or tau flavours and aren't spotted by SuperKamiokande. When the detector is night-side, the neutrinos have already interacted in some small way with Earth's mass, lost some energy – and because they arrive at the detector as electron neutrinos, they're spotted.

The researchers are still cautious: at a statistical significance of 2.7σ this falls under the heading of “observation” rather than “discovery”. However, the agreement between prediction and observation is encouraging, especially with plans afoot to build a larger detector.

The proposed HyperKamiokande would be 25 times as large as today's detector, the researchers say.

With a large enough data set, it's feasible that neutrino detectors could provide us with more information about the structure of the Earth. ®