Apple rakes in 60% of profits in still-surging smartphone market

Detractors cavil while Cook & Co. laugh all the way to the bank

The global smartphone market continues to skyrocket, and Apple and its iPhone line continue to slurp up the lion's share of that market's profits despite holding a relatively small marketshare when compared to arch-competitor Samsung. 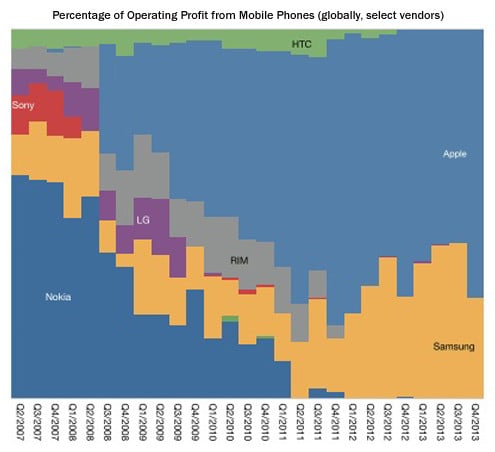 Apple pulls in an amount of profit in the mobile phone market ... 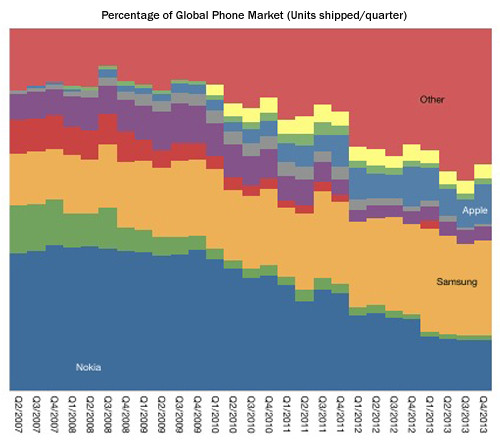 ... that's markedly disproportionate to its share of that market (source: Asymco)

"Since the launch of the iPhone," writes Horace Dediu of Asymco, "the net profits earned by the collection of [smartphone market] protagonists shown was $215 billion. 60 per cent has been earned by Apple."

Why this dominance in profit on a relatively small market share? While we're certain that some observers will fulminate about "sheeple" and "fanbois", the simple fact is that smartphone consumers are willing to pay for the product they prefer. You pays your money and you takes your choice, as the hoary cliché puts it.

Or, as the Romans put it, de gustibus non est disputandum. Nor should there be arguments over taste, in this Reg hack's opinion; to wrestle another cliché to the floor, one man's meat is another man's poisson.

Dediu has a slightly different take on Apple's profit dominance, saying that the consistency of Apple's market performance is a rare feat, one that is typical of a monopoly or a protected market. But Apple has no monopoly, nor is the smartphone market protected in any way other than through carrier agreements. "Apple's lack of market monopoly coupled with a (near-) monopoly in profits can only be explained by disproportionate value creation," he writes.

Enough people see enough value in Apple products that are willing to pay enough for that perceived value to keep Apple's "(near-) monopoly in profits" chugging along.

And there doesn't seem to be a brick wall facing Apple's smartphone-profit juggernaut on the immediate horizon. There has been much talk about the "saturation" of the smartphone market, but Dediu's numbers don't demonstrate that happening quite yet. 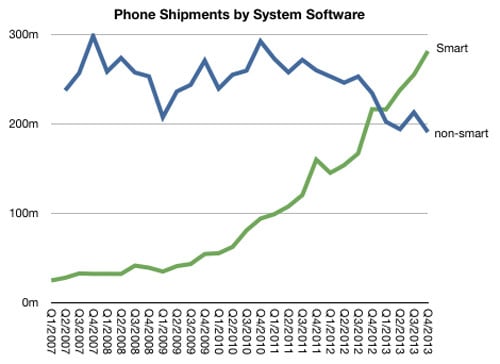 "Note that prior to 2012 the non-smart market seemed to be holding steady in spite of the growth in smartphones," Dediu writes – but no more. While the smartphone-growth trend line continues steeply upward, the "non-smart" phones' stats are stuttering downward.

Not that Apple's ongoing success will necessarily ensure it an easy ride into the future. The iPhone 5c stumble, for example, certainly shows that the Cupertinian product planners are far from infallible.

That said, CEO Tim Cook's mission statement that "we're not in the junk business" seems to be working out quite well – although as Wall Street's boilerplate disclaimer puts it, "past performance is no guarantee of future results."

No guarantee, of course, but certainly an indicator worth watching. ®