Imagination Technologies has launched its new PowerVR Wizard GPU series, complete with hardware-accelerated ray tracing, and has also announced the first member of that new product family, the PowerVR GR6500.

"This opens up the potential of highly photorealistic, computer generated imagery to a host of new real-time applications and markets not previously possible," Imagination's marketing man Alexandru Voica wrote in the company blog.

The PowerVR Wizard family, Voica says, is designed to provide not only graphics and compute, but also "high-performance" ray-tracing capabilities, in a power envelope suitable for mobile and embedded uses.

In a nutshell, ray tracing – in the computer-graphics sense – simulates the path of light beginning at a source and then encountering an object that reflects it, refracts it, scatters it, or induces some other simulated optical effect on it before that ray passes through the image plane and into the viewer eye.

"Our ray tracing IP is here," Imagination president and CEO Hossein Yassaie said in an emailed statement, "and it's ready for our licensees and developers to begin creating a new wave of immersive and exciting PowerVR-based consumer experiences."

Ray tracing algorithms can produce exceptionally realistic lighting effects – dynamic soft shadows, complex reflection patterns, subtle transparencies, and the like – but since they are quite computationally intensive, those complex algorithms have kept real-time ray tracing limited to GPUs more powerful than those that'll live comfortably in a mobile device.

That's where the Wizard family and PowerVR GR6500 come in. According to Voica, when clocked at 600MHz, the GR6500 can handle up to 300 million rays per second, 24 billion node tests per second, and 100 million dynamic triangles per second, and still operate at efficiencies that enable it to be mobilized. 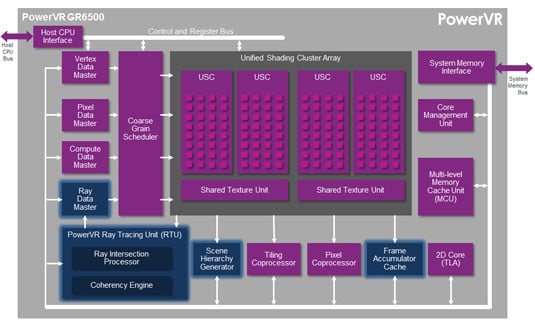 The GR6500, which is based on Imagination's latest-generation PowerVR Rogue architecture, also includes four unified shading clusters (USCs) with a total of 128 arithmetic logic unit (ALU) cores that – also when running at 600MHz – will crank out over 150 GFLOPS running single precision (32-bit) floating point, and double that at half-precision, according to Voica.

In addition, there are hardware blocks tasked with accelerating the ray-tracing workflow. "All of these ray tracing-specific elements have been designed to integrate efficiently and communicate perfectly with the rest of the GPU architecture and produce real-time, interactive ray traced graphics that can comfortably scale from mobile and embedded platforms to gaming consoles and mainstream gaming PCs," says Voica.

These hardware accelerators make the GR6500's ray-tracing workflow more efficient than when ray-tracing algorithms are simply run on traditional GPUs, the company claims. "These blocks do not affect the shading performance of the traditional graphics pipeline because they do not use up shading GFLOPS to perform ray tracing-related tasks," Voica says, asserting a "100x" improvement in ray-tracing performance over GPU compute or other software-only approaches.

As a bonus, the little mighty mite is compliant with a passel of common APIs, including OpenGL 3.x, Direct3D 11 Level 10_0, OpenCL 1.2, OpenRL 1.x, and not only OpenGL ES 2.0 and 1.1, but also the newest version of the mobile and embedded graphics API set, OpenGL ES 3.1, announced on Monday.

When we brought you the OpenGL ES 3.1 news, we pondered in print as to when Imagination Technologies would release its first design compliant with the new API standard. Didn't take long to find out, eh? ®

In related news, Unity Technologies released Unity 5, the latest version of its multiplatform game engine and development toolset, which it claims is a "massive upgrade" to the Unity Engine. Unity 5 includes, among other enhancements, what Unity calls "the first-ever development platform to ship with in-editor real-time lightmap previews based on Imagination's ground-breaking PowerVR Ray Tracing technology."