Some tech angles for your consideration

The final blip is received from MH370's satcomms equipment, indicating that the plane's systems were powered down within one hour after that point. This could be because it crashed, or (as our 777 driver points out) because the plane then landed and was shut down completely to "batteries off" by the pilots. It might, indeed, already have been on the ground but not yet shut down when the last satcomms blip (or even maybe the last couple of blips, say) were sent.

This final blip was then used to generate the two arcs along which the search for the missing plane is now focused. One is far out in the Indian Ocean west of Australia (though this arc does include the possibility that the plane circled round to land/crash in Indonesia). 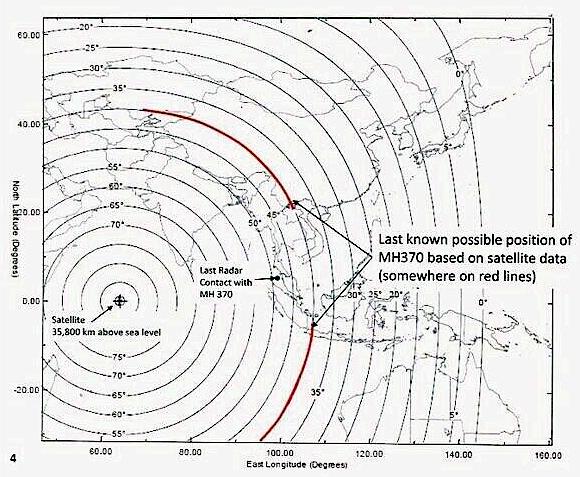 A handout from the Malaysian government showing the possible last locations of flight MH370 based on radar ... see below for it in context against a map of the world

The northern arc as specified by the Malaysian authorities (with help from British satcomms firm Inmarsat) runs from the Central Asian 'Stans down across the wilderness of Western China (including Tibet) and then along the Himalayas and down to the borderlands where Burma, Laos, Thailand and Vietnam come together with China - the so-called "Golden Triangle" where around half the world's heroin comes from. Much of the area, though nominally under the control of the respective national governments, is actually a conflict zone dominated by warlords, rebels, narco-trafficking gangs or combinations of all three.

One could say the same things of the 'Stans (which make up much of the "Golden Crescent" where most of the rest of the world's heroin comes from) but unlike the Triangle the area around Afghanistan is under heavy US military aerial radar surveillance: most probably including airborne radar watch by AWACS planes and/or E-2 Hawkeyes operating from US carriers offshore. If MH370 had made it that far, it would probably have found itself being investigated by US fighters.

So the Malaysian authorities' arcs seem reasonable enough, given that they seem confident the plane did not return to the region it departed from (perhaps having received some co-operation on military radar logs from other nations out of the public eye).

And that's most of what we know. We can add that the arcs appear as lines on a large-scale map, but in reality a line-of-position generated like this will not be exact. Further, the plane could still have carried on flying for up to an hour after the final blip was sent - so it could be hundreds of miles off the arc in any direction. The searchers have two immensely long, wide strips to cover - not lines.

Our 777 pilot does have a couple of things to add. Some reports, for instance, purporting to be based on military radar data, suggested that the missing jet might have descended to a low altitude to get out of radar coverage (going low can naturally drop a plane below the horizon a radar sees. Radar transmissions generally travel in straight lines and can't normally detect anything below the horizon as seen from the radar). However:

Down low it would burn fuel at the same rate (ish) so could stay airborne for a similar period of time but could only fly at about 220kts (faster would incur a great fuel penalty) giving a range from last known position in the order of 1200NM. That's why we fly them at [37,000 feet]!

In other words the jet could not have made it onto the arcs where the last satellite blip came from, had it been at low level for any great length of time.

As for a possible explanation for the affair, our airline man is as baffled as anyone else. However he had an intriguing note to add:

We often carry lots of cash ... not every country has the capacity to produce its own banknotes for example. And gold too on occasion. The captain is always notified of such special loads (along with any dangerous goods, munitions of war, firearms, etc) on what is called a NOTOC - a bit of paper detailing such a load and where it is in the holds.

Again, it seems likely that if any such load had been aboard the plane, the fact would have been revealed by now. On the other hand, transfers (or failed transfers, or disappearances) of significant amounts of gold or currency reserves can have serious effects on national markets and economies: there could be good reasons for a government or governments to keep such a loss out of the media for as long as possible. And the fact of such a cargo being on a particular flight is one of the relatively few things that the aviation industry actually tries properly hard to keep secret in the first place.

So it's an outside possibility, decreasing as time goes by with no such news.

Other than that, insight is hard to come by. But one can say that the whole operation involved a lot of expertise and effort: someone seems likely to have had a very good reason to carry it out.

It's possible to say that along the Chinese arc among the Tibetan rebels and the warlords of the Triangle there are a lot of situations going on which might drive people to do bad or desperate things. That's not so much the case with the empty Indian Ocean west of the Australian continental shelf. So we'd hazard a guess that if and when MH370 is found, it'll be on the northern arc rather than the southern one.

But the truth is, we don't know. And there remain plenty of scenarios in which neither the missing Boeing nor any of the people on board will ever be found. ®