A recently-granted Apple patent seems to lay out some of Cupertino's thinking about the future of Siri and the Internet of Things: and it's spooky.

Essentially, Apple sees the device you carry as acting as the interface between wetware like you and me, and the Internet of Things, represented by sensors in the home or office.

According to Patently Apple, which has undertaken the daunting task of unpacking the claims in US Patent 8,677,377, Apple's aim is to make Siri – or something like it – not just something Theodore Twombly falls in love with, but the centre of the household.

That's no light task. Apple's patent attorneys were hard at work on this one, doing their best to obfuscate the rendering of the patent claims:

However, this image from the patent helps: 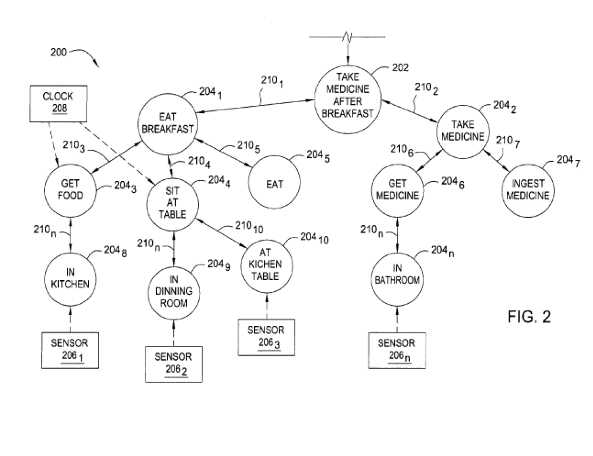 Siri knows where you are

It suggests not only that Siri would act as a reminder that you need to take medications – a perfectly mundane notion really – but that it would be interfaced with sensors throughout the home. Hence the assistant's knowledge that the user is in the kitchen or sitting at the dining table, or in the bathroom.

The assistant – described as an “active ontology” in the patent – “is also in communication with a plurality of sensors ... that are distributed throughout the modelled domain and are adapted to convey observed facts relating to the user's behaviour (e.g., "the user is in the kitchen"; "the user is in the dining room"; "the user is in the bathroom"; etc.) to the higher-level concepts ... for appropriate processing.”

And in some not-too-distant future, if the world ever spawns another Edward Snowden, we'll find that NSA spooks didn't just record your phone calls, e-mails, social media use and browsing, they'll also have built an even bigger data centre to analyse your movements in your home. ®