Budget Day 2014 Chancellor of the Exchequer George Osborne presented what he described as a Budget for "the makers the doers and the savers" - and let's not forget the bingo players - in today's economy statement to Parliament.

There was very little news for the tech world, with one notable exception: the announcement of the Alan Turing Institute that Osbo said would "make sure the UK leads the way in big data and algorithm research".

The government plans to inject £42m into the organisation over the course of five years. It appears to be Downing Street's latest feeble attempt at birthing a Google in the UK.

Meanwhile, a further £72m from the public purse is being chucked at research and development of graphene and cell therapy manufacturing.

But the thin-lipped occupant of Number 11, who wants Britain to be leading the world in science and technology, made no mention in his speech of the rollout of superfast broadband. The Register instead needed to look at the accompanying Budget report to fish out any nuggets that Osbo may have overlooked.

Slim pickings, alas, we simply learned that "over 330,000 more premises have access to superfast broadband" as part of the Tory-led Coalition's commitment to growth in Blighty.

The Budget itself was smugly characterised by the chancellor as one for "building a resilient economy". He added that the government was backing manufacturing in "all regions of our country" and said that the UK was "getting on top of our debts".

Those of us out there in the fortunate enough position to have some savings in the bank, might be somewhat cheered by Osborne's promise to look after Brits with cash stashed away.

"You have earned you have saved it and this government is on your side," he said. "We're backing a Britain that saves."

Osbo said that cash and stocks ISAs would be merged and added the limit for tax-free saving would rise to £15,000 from £11,520. Additionally, the Treasury said it would abolish the 10 per cent savings tax rate and extend the 0 per cent band to £5,000.

To please Middle England ahead of next year's General Election, Osborne announced a number of vote-winning measures, including a halt on the planned fuel duty hike that was expected in September.

He also said that Scotch whisky and West Country cider should be protected from tax duty because of the former's important contribution to the British economy and the latter's tough times during the floods.

Osborne knocked just 1p off the price of beer and added that all other booze and ciggies would see the duty rise by 2 per cent, because, the chancellor said there was "no sound health issues to end" such price increases. 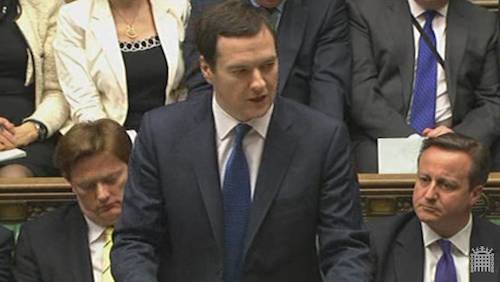 Oi, Alexander, don't doze off, you've got another year of this Coalition nonsense

Our CEO readers should note that private jets finally face air passenger duty. Road users, meanwhile, might be happy to hear that the government is spending £200m to fix potholes around the country.

Bingo duty will be halved by 10 per cent to support bingo clubs' contribution to British culture, apparently.

Less cheerily, Osbo's promise to rescue the UK's dire economy by the end of this current Parliament is now officially broken. The Office for Budget Responsibility revealed today that, by 2018, there will be no deficit. But the government plans to borrow £95bn next year alone. ®