Baseline data finds 25 gigatonnes of carbon in the loam

CSIRO has published what probably amounts to one of the largest datasets ever assembled in Australia: an assessment of organic soil carbon on a 90 metre x 90 metre grid, nationwide.

It'll hardly surprise anyone that it's taken four years to get the data ready for release. The 2010 organic soil carbon map includes around two billion blocks, and in each block, soil carbon has been measured to a depth of 30 cm.

The map is the combination of multiple datasets, the most important of which were “the national Soil Carbon Research Program (a nationally coordinated research program led by CSIRO, universities and state government agencies, funded by the Australian Government) and CSIRO’s National Soil and Spectral databases”, CSIRO's announcement says.

The data was collected mostly by direct sampling, along with some remote sensing and what the agency calls “innovative prediction methods”. 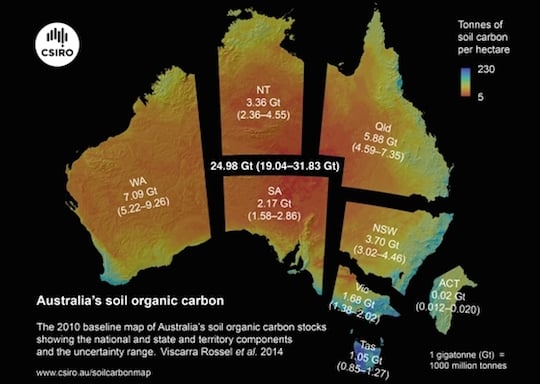 Dr Raphael Viscarra Rossel, project leader, told the Australian Broadcasting Corporation: “For the first time, we were able to test baseline levels for soil carbon across the country”, adding that this will allow future changes caused by climate change to be measured. ®