'Would you wish your wife or servants to view this website?' 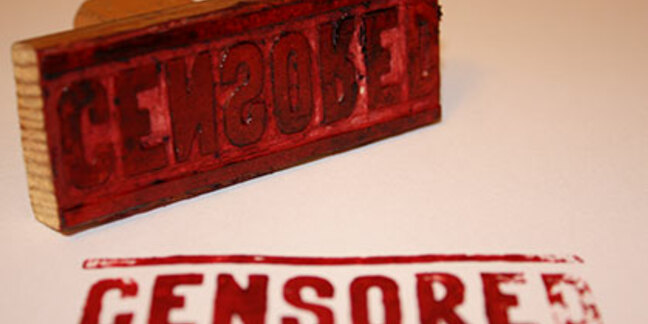 MPs want Britain's network-level filters to do a better job of censoring access to pornography sites to keep the content away from the prying eyes of children. But, to do that, perfectly legal online smut peddlers need to cooperate.

That was the conclusion in a report (PDF) published today by Parliament's Culture, Media and Sport Committee, following a series of parliamentary hearings about internet safety.

The politicos said that grumble flick websites should require a credit card payment "linked to an adult"; shield the content behind a warning page and attach metadata to the site so that filters and search engines can more easily detect the content; and, ultimately, block it.

MPs on the cross-party panel, which is chaired by John Whittingdale, are calling on the government to use a 55-year-old law to better police the publishing of adult material online.

Publishing adult pornography in a way that makes it readily available to children is likely to be an offence under the Obscene Publications Act 1959. We do not believe the police should be deterred from bringing to book publishers of adult pornography who make little attempt to shield children from their product.

While acknowledging that the enforcement of obscenity legislation is fraught with difficulty, not least in the context of the internet, we believe there is scope for greater enforcement in this area to provide some deterrent effect.

There may also be scope for blocking particularly harmful adult websites that make no serious attempt to hinder access by children.

But the MPs added that it was "anxious to avoid suggesting a significant extension of formal content regulation of the internet."

They said parents and teachers needed do more to educate children about the dangers of the online world.

Meanwhile, social networks such as Facebook and Twitter were criticised by the panel for having age verification systems in place that "are at best flimsy".

Such services should do a better job of offering a range of options for people to report harmful content and communications, the MPs argued.

The committee said: "Some of the worst online bullies and trolls are being brought to book in the courts. Much of the abuse and bullying that takes place online is covered by existing laws, but these need to be clarified with guidance updated for the online space."

The Obscene Publications Act 1959 was the law famously used to try to prevent the publication of DH Lawrence's novel Lady Chatterley's Lover, which contains graphic descriptions of a married aristocrat's affair with her gamekeeper. In his opening address, prosecuting barrister Mervyn Griffith-Jones famously uttered the phrase "Is it a book that you would even wish your wife or your servants to read?"

The jury found in favour of publication.

Europe supplants US as biggest source of child abuse hubs

Scumbags host 92% of it in just 5 countries

When it comes to DNS over HTTPS, it's privacy in excess, frets UK child exploitation watchdog