According to Professor Ping Koy Lam of the ANU, who spoke to The Register, the protocol developed by his team helps circumvent the fragility of entanglement, the property of quantum systems that's important for quantum communications, computing, and key distribution.

The record for preserving correlation, even in the low-noise environment of a fibre-optic cable, is about 260 km, Professor Lam explained, and even that's a remarkable achievement given how difficult it is to preserve entanglement. With noiseless amplification of the quantum system, “we hope to achieve perhaps twice that range of the channel.”

The ANU protocol is based on what Professor Lam described as “probabilistic amplification”. The problem with amplifying quantum objects is that you introduce a noise penalty as well, and noise destroys entanglement. This was outlined in a key 1982 paper by Carlton Caves. 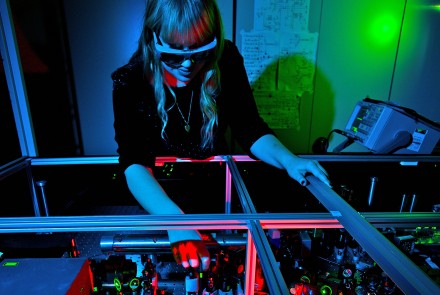 with the ANU quantum communications setup.

However, Professor Lam said, “you can circumvent this if you're prepared to sacrifice most of your data. For example, we might run the experiment 1,000 times, knowing that once out of that 1,000, the system will give you noiseless amplification.”

The ANU protocol implements a filter function, he said, and with the right filter shape, “you get the right statistical function – what you get out of the system is a probabilistic noiseless amplified signal”.

Rather than being implemented as a midpoint regeneration-style amplifier, the ANU probabilistic noiseless amplifier is implemented at endpoints.

And since the ANU solution is an algorithm rather than a particular physical setup, the results should be readily reproducible by other researchers with suitable environments. ®