His opinion is unsurprising; the fact that he offered it publicly is

Apple CEO Tim Cook doesn't much like the new book, Haunted Empire: Apple After Steve Jobs by Yukari Iwatani Kane, which paints a picture of today's Apple, as its title implies, as being haunted by the ghost of its former cofounder Steve Jobs, adrift, and based on "a cult built around a dead man."

To Cook, the book is "nonsense." He also can't be happy with Kane's assessment of his management skills, which she expressed to CNBC. "My question is who is the decider now at Apple now that Steve is not around," she said. "I just can't imagine it being Tim."

Your Reg reporter hasn't read Haunted Empire – gossipy tell-alls are not his cup of tea, really – but a review by Macworld, PCWorld, and TechHive editorial director Jason Snell provides a sense of it. Being a Mac man from way back, Snell does have a certain point of view, but I've known him since the 1990s, and he's a reasonable, thoughtful man.

Snell's take, in summary: "Apple after the death of Steve Jobs would be a fascinating topic for a book. This isn't the book. Haunted Empire can't get out of the way of its own Apple-is-doomed narrative to tell that story." 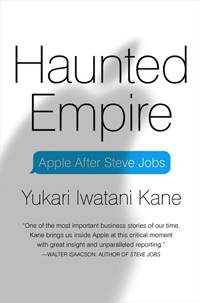 The book that got under Tim Cook's skin
(click to enlarge)

This nonsense belongs with some of the other books I've read about Apple. It fails to capture Apple, Steve, or anyone else in the company. Apple has over 85,000 employees that come to work each day to do their best work, to create the world's best products, to put their mark in the universe and leave it better than they found it. This has been the heart of Apple from day one and will remain at the heart for decades to come. I am very confident about our future. We've always had many doubters in our history. They only make us stronger.

What's most striking about Cook's response, of course, is that he responded at all. Under both Jobs and Cook's watch, Apple has retained tight control over any and all of its public utterances. Its news releases, for example, trickle out at a rate far, far slower than other industry players; access to its execs is fanatically controlled; and their talking points are polished to a sheen rivaling that of a twenty-dollar suit.

But now – allofasudden – CEO Cook posts a missive in an Android-versus-iOS pissing contest.

But Cook does make one good point when he says, "We've always had many doubters in our history." The Mac Observer's long-running "Apple Death Knell Counter" chronicles such sage utterances, including such well-known gems as Michael Dell saying, when asked in 1997 what he'd do if he were Apple CEO, "I'd shut it down and give the money back to the shareholders."

There's another quote in that collection from the mid-1990s that Haunted Empire author Kane might have found of interest: "The Macintosh will die in another few years and it's really sad." Who was that defeatist? Saintly Steven Paul Jobs himself.

For her part, Kane issued her own statement in response to Cook's review of Haunted Empire:

For Tim Cook to have such strong feelings about the book, it must have touched a nerve. Even I was surprised by my conclusions, so I understand the sentiment. I'm happy to speak with him or anyone at Apple in public or private.

Wanna bet she doesn't get that meeting? ®