Direct3D API 'faster and more efficient than ever before' we're told

GDC Microsoft has unveiled DirectX 12, at the heart of which is the Direct3D API, which Redmond promises will enable "richer scenes, more objects, and full utilization of modern GPU hardware" – and which will run on "many" cards that gamers already own.

"What makes Direct3D 12 better?" Microsoft's Matt Sandy asked in a blog post. His answer: "First and foremost, it provides a lower level of hardware abstraction than ever before, allowing games to significantly improve multithread scaling and CPU utilization."

Digging deeper into geek-speak, Sandy noted that the new API also reduces GPU overhead through the use of descriptor tables and what he referred to as "concise pipeline state objects." He also cited new rendering-pipeline enhancements that will improve the performance of algorithms used for such functions as "order-independent transparency, collision detection, and geometry culling."

In a nutshell, the new API will give game developers more control over the eye-candy they present to gamers, Microsoft says, and their code will run more efficiently, being closer to the "bare metal" of gamers' GPU hardware – and that will hold true for the Xbox as well as laptops, desktops, tablets, and phones running Microsoft operating systems. 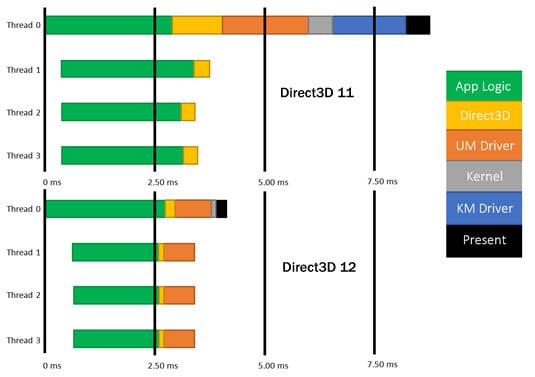 According to Microsoft's Sandy, Direct3D 12 kicks Direct3D 11's behind in multithreaded 3DMark testing

Exactly which operating systems, however, remains a bit unclear. DirectX 12 won't support Windows XP, and as IGN reports from the rollout at the Game Developers conference on Thursday, Microsoft would only say that they weren't "discussing Windows 7 support today."

As far as hardware goes, Sandy's blog post said that "over 80 per cent of gamer PCs currently being sold" today include a GPU capable of running DirectX 12–enabled games, and that "we will link to our hardware partners' websites as they announce their hardware support for Direct3D 12."

Of those partners, AMD, Intel, and Nvidia sent reps to the rollout – and Nvidia's SPV of content and technology Tony Tamashi, PCWorld reports, took a potshot at AMD's similarly low-level Mantle API optimizations, saying that Nvidia was excited about DirectX 12 because it offers improvements "within the framework of existing graphics APIs."

Intel's VP of platform engineering Eric Mentzer was more polite. "This is absolutely, I think, the most significant jump in technology in a long, long time," he said.

We'll let the hardware guys alternately snipe and effuse about Microsoft's new gaming platform – and they'll have plenty of time to do so, seeing as how DirectX 12's release is scheduled to coincide with games released for the 2015 holiday season. ®